Advanced RPET plant on the way near LA 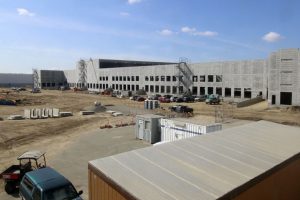 Construction is underway on the rPlanet Earth facility in Vernon, Calif.

Construction is underway on a massive Los Angeles-area plastics recycling facility that will take PET bales all the way to bottle preforms, extruded sheet and thermoform packaging.

The 302,000-square-foot facility in Vernon, Calif. is being built for a new company, rPlanet Earth. Taking in baled post-consumer PET, including material from curbside collections, the plant will sort, wash, decontaminate and convert it into food and drink packaging. It will melt flakes for molding and extruding, skipping a pelletizing step.

The company’s products will be made from RPET flakes and, at customers’ requests, may contain virgin PET, but rPlanet Earth won’t sell flakes or pellets.

“When we were looking to put this together, we thought that that business model made the most sense and would make the company sustainable from an operations and profitability standpoint, where some other folks struggle that only produce a flake or a pellet,” said Bob Daviduk, co-CEO of rPlanet Earth. “We don’t believe that the flake or pellet business is a good one to be in over the long run.”

Joe Ross, co-CEO, noted that when you sell a pellet it could be used to make carpet or any number of industrial products, but major retailers want to have true closed-loop systems.

The building is being designed to accommodate a second phase capable of generating at least the same volume. The structure will also provide a new headquarters for rPlanet Earth.

Construction contractor Xebec Building Co., one of the companies working on the project, noted the site’s proximity to the L.A. and Long Beach ports and multiple freeways.

Daviduk said rPlanet Earth has already invested substantial sums of money. Last year, it invested about $35 million. By the end of this year, it expects to spend another $55 million, and next year it anticipates spending another $10 million to $15 million, he said, for a total expected investment of more than $100 million.

“It’s a huge investment. It’s a huge commitment to increasing the supply of recycled content out in the marketplace – and high-high-quality recycled content,” Daviduk said. “Obviously good enough that we believe we’ll meet any brand owners’ specifications.” 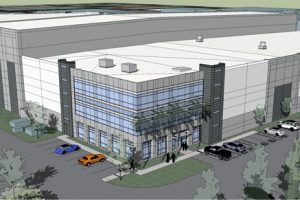 A rendering of the completed rPlanet Earth facility.

Ross noted rPlanet Earth will use Krones’ bottle-grade flake production technologies, which have achieved scientific approval with Coca-Cola. Ross has prior experience in the packaging world, including with companies producing recycled-content PET products.

The technology rPlanet Earth is implementing has a green light from the U.S. Food and Drug Administration to produce food- and beverage-contact products.

The front-end sorting system will be provided by Eugene, Ore.-based Bulk Handling Systems. In addition to processing PET collected through bottle redemptions, rPlanet Earth plans to run Grade B material from curbside programs through the plant. That means they need a robust sorting system up front to remove non-PET plastics, Daviduk said.

He noted that China’s ban on recovered plastic imports is “a big positive for us.”

“A lot of Grade B material was shipped to China, and now you’ve got a major buyer that’s effectively out of the market,” he said.

Germany-based packaging and bottling machine company Krones is providing the wash line and decontamination system. The flakes will be decontaminated at 200 degrees Celsius under vacuum. Equipment companies Welex, Lyle and Husky are providing the sheet, thermoform and bottle pre-form equipment, respectively.

The percentage of recycled content in its products will depend on the customer’s desires, but the facility will be able to generate 100 percent RPET products, Daviduk said.

The project has received financial support from the state and federal governments.

Daviduk said the support helps secure interest rates below what the market is willing to provide, given rPlanet Earth’s lack of operating history. He has extensive experience in the finance world.

The company is also receiving additional financing, with Daviduk noting that rPlanet Earth has two “deep-pocketed institutional investors” supporting it.

Daviduk sees strong demand for rPlanet Earth’s products in the market in the future. In reading sustainability reports from major companies, he often hears them say they’d use more RPET if it were available, competitively priced and of high quality.

Ross said the rPlanet Earth team is having conversations with a number of major companies.

“They know that we’re coming and they’re very interested,” Ross said. “And we’re working not only with R&D but also with purchasing departments in all of these opportunities.”