How an intelligent robot creates a clean HDPE stream 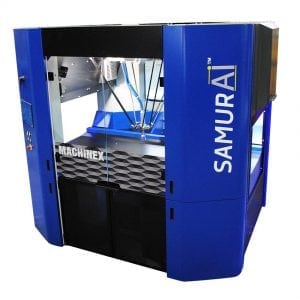 In one Chicago recycling facility, natural and colored HDPE are being picked from the residential recyclables mix with the latest sorting technology: a robot with artificial intelligence.

The materials recovery facility (MRF) run by Lakeshore Recycling Systems installed the robot in May. The company first announced it in late June.

The SamurAI unit was provided by Quebec-based recycling equipment company Machinex, which licenses the robot’s software brain from Denver company AMP Robotics. AMP developed software that allows a computer to recognize objects on the conveyor belt based on their visual appearance. The artificial intelligence aspect allows the computer to learn and improve its accuracy over time.

At the Heartland Recycling Center, SamurAI is working on the container line immediately after an optical sorter that’s separating PET. The robot uses a suction cup attached to four arms. It is programmed to pick HDPE natural, aluminum foil, HDPE color and aseptic cartons, in that priority order, said Alan Handley, CEO of Lakeshore.

In late July, when Plastics Recycling Update spoke with him, Handley said SamurAI was achieving between 50 and 60 picks per minute, close to what a human sorter can do. The accuracy was at about 85 percent.

The system is improving on a weekly basis, he said. For items it misses, Heartland staff put the system in learning mode and run the items back under the camera. That allows it to recognize items it needs to pick. Additionally, it is connected to other AMP robots, allowing it to learn from their experience.

“I think we should get better progress and better flow as it gets smarter,” Handley said.

After the robot is a quality control staffer, who Handley described as a “safety stop” during SamurAI’s transition process. The goal is to get SamurAI’s accuracy into the 90-percent range; once it begins to hit accuracy and pick rate targets, the robot QC staffer won’t be needed. He predicts that’ll occur in the third quarter of this year.

According to Machinex, the robot can achieve up to 70 picks per minute and 95 percent accuracy.

Another benefit of the robot is it allows the facility to operate with fewer employees. “In this market, where it is very difficult to find MRF workers at all, it’s one less thing I have to worry about, not to mention workers’ compensation, calling in sick and all of the other things that go on in that kind of labor pool,” he said.

Handley said he has already ordered two additional SamurAI units, which are supposed to arrive during the third quarter.

Robots are being used more and more to sort post-consumer packaging. Other sorting robots with artificial intelligence that have been installed include Max-AI from Eugene, Ore.-based Bulk Handling Systems (BHS) and the ZenRobotics Recycler from Helsinki-based ZenRobotics. This is the first SamurAI to be installed at a working facility.