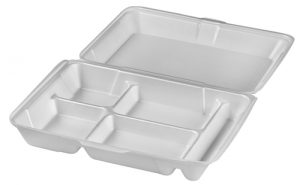 A defunct foam polystyrene recycling company has appealed its antitrust case against EPS product manufacturers to the U.S. Supreme Court. Those converters are now urging the court to ignore the appeal.

The years-old case is between Evergreen Partnership Group and PS product makers Pactiv, Solo Cup, Dolco Packaging, Dart Container and Genpak (Genpak has since settled with Evergreen), as well as the American Chemistry Council (ACC).

Founded in 2000 by Michael Forrest, Evergreen closed its processing facility in Georgia in 2008. The recycling company first filed a lawsuit in May 2011 accusing the PS product manufacturers parties of conspiring to work against it, ultimately leading to the company’s failure. It alleged violations of the Sherman Act, U.S. law stemming from 1890 that prohibits conspiring to restrain trade.

Evergreen sought to collect used EPS food service items from school districts, recycle them and provide the pellets to manufacturers for use in a line of “green foam” products, according to an appeals court decision. It would charge a fee to school districts, sell the pellets to converters and take a commission on the sale of products containing its resin.

The recycling company claimed that during a May 2007 conference call of the ACC’s Polystyrene Foodservice Packaging Group, the five converters agreed that none of them would enter into a deal with Evergreen that included the payment of commissions. It also alleged they agreed to promote a competitor, Packaging Development Resources of California (PDR), which Evergreen called a sham business, to block its access to PS end users.

“The crux of Evergreen’s claim is that the defendants conspired to prevent its recycling model involving commission payments from becoming viable by universally rejecting any agreements that involved commissions and blocking its access to other customers through the promotion of PDR,” the appeals court noted.

Evergreen alleged they worked together to prevent Evergreen’s business model from catching on, because it would have meant more pressure on them to participate in costly recycling operations.

The defendants denied the accusations, and in a statement sent to Plastics Recycling Update, the ACC called them “wildly imaginative, but baseless, claims.”

The U.S. District Court for the District of Massachusetts in July 2015 dismissed the case. Evergreen appealed, and in August 2016, the U.S. Appeals Court for the First Circuit upheld the district court’s dismissal.

In March 2017, Evergreen appealed to the U.S. Supreme Court, which has yet to decide whether to take the case, according to scotusblog.com. The lower courts concluded that Evergreen failed to present evidence “that tended to exclude the possibility that each polystyrene manufacturer independently chose not to partner with Evergreen.” But, in the petition to the Supreme Court, Evergreen’s attorneys claimed that stringent standard was the incorrect one by which to judge the evidence.

Attorneys for Pactiv, Solo Cup, Dart, Dolco and the ACC on July 17 submitted a brief arguing that the Supreme Court shouldn’t take up the case. In addition to presenting myriad legal arguments, including that the “tended to exclude the possibility” standard is the correct one, they asserted the scheme Evergreen alleged is “implausible.” They claimed the company failed because it couldn’t compete in the marketplace.