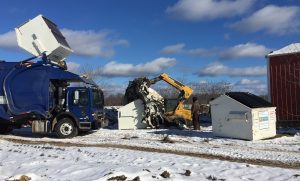 A free service collecting LDPE films commonly used on farms kicked off in central Minnesota this week, the latest expansion for a growing ag-oriented project.

Revolution Plastics is the collection arm of Little Rock, Ark.-based Delta Plastics. It launched in June 2016 and has been steadily developing its base of farm customers.

Over 3,000 sites are now a part of the program, Price Murphy, Revolution’s director of operations, said in an interview. “We’re collecting millions of pounds every month from Wisconsin and Minnesota farms,” he added.

The lack of charge for plastics collection has made the program a popular service, but some of the unique requirements that make it possible have led to minor hitches in collection.

Delta Plastics manufactures poly tubing for irrigation, and it also specializes in the recovery and recycling of that tubing. The company has recycled ag plastics for more than 20 years, and it began investigating the collection end of the spectrum three years ago.

Delta was contacted by an agricultural industry representative who described a common situation on farms in southern Wisconsin: There were growing tonnages of used plastic, including a substantial amount of LDPE film from silage bags, bunker covers and barrel wraps. Together, those material types accounted for 55 million pounds of product sold in Wisconsin last year.

The material litters the grounds at dairy farms, beef farms, goat farms and other locations, Murphy said. Farmers had few options to get rid of the materials when they were no longer useful.

“So they were either burning it on the farm or they were having to haul it to the landfill,” Murphy said.

Interested in the prospect, Delta hired some analysts to look at how much ag plastic would be available for collection. They also investigated the logistics of transporting the material down to Arkansas for manufacturing. Six months later, the company started up a test run for the project, placing 88 dumpsters across southern Wisconsin.

Delta determined the process was viable, provided it was operated almost entirely in-house to keep it as consolidated as possible.

In 2016, Revolution began rolling out the program in southern and northeastern Wisconsin. Farms are provided an 8-cubic-yard Wisconsin-manufactured dumpster free of charge, and based on the size and plastic output of the farm, they’re set up on a collection schedule: Depending on specifics, pick-up occurs either every two weeks, four weeks, eight weeks or 16 weeks.

The dumpsters are collected by Revolution’s fleet of half a dozen Mack Cab & Chassis trucks, and then shipped down to Delta’s Arkansas factories. There they go through a wash process, a process that Murphy said is critical due to the fact ag plastics get very dirty during warmer months.

From there, the plastics are processed into post-consumer resin that Delta uses to manufacture construction film and trash-can liner bags.

“We’ll sell the actual resin from time to time. but right now the vast majority is going into our own product line,” Murphy said.

Although burning or landfilling have long been common ways of dealing with plastics no longer fit for the fields, Revolution has realized stockpiling is another all-too-common approach.

Murphy said Revolution has found as much as 70,000 pounds of ag plastics on a single farm, stashed in barns, between buildings or sitting in heaps.

“[It’s] a great thing to help them clean their farm up,” Murphy said. But it means Revolution runs into problems staying on schedule. Dealing with a massive stockpile can lead to collection setbacks. Collection trucks typically hit between 20 and 25 farms each day, and when a truck gets stopped at a single farm for multiple days, backlogs ensue.

“That’s irritated some people, but it’s a free service, and we’re just trying to help where we can,” Murphy said. “That’s the big thing with the stockpile: The [farms] have to communicate, and we have to schedule the appropriate time to clean that up for them. It may take a couple visits or it could be one, but they cannot monopolize my whole team, because they’re just hurting their neighbor.”

Another problem has been making sure the dumpsters are properly loaded with the correct materials when collection trucks arrive. The service collects select film materials, and an 8-yard dumpster fully loaded with those materials will total about 1,000 pounds of plastic. But the material has to be packed down tight, not loosely thrown into the dumpster, in order to reach optimal capacity. When trucks show up and a dumpster is only a quarter of the way full, it impacts the bottom line for the service.

Murphy noted that while these cases have come up occasionally, 97 percent of customers are adhering to the guidelines correctly.

“We don’t want to start something that’s not going to last, so we had to make sure we put something together that’s everlasting and sustainable,” Murphy said. “And I believe that’s what we’ve done.”

This week, Revolution began collecting plastic from more than 500 new customers in central Minnesota. The company plans to keep its focus within the Midwest for the time being.

Ag plastics recycling has become a larger focus for a number of Minnesota organizations recently. The Recycling Association of Minnesota (RAM) and a large contingent of partnering agencies have “long been looking for an economically and environmentally sustainable solution for management of ag plastics,” the group wrote in February.

RAM, in partnership with nine Minnesota counties, also recently received a state grant that will be used to “help research, develop, and expand agricultural and boat wrap plastic recycling throughout the state,” according to the Mankato Free Press.

Prior to Revolution expanding into Minnesota this year, the state’s recycling association expressed a longstanding desire for the company’s ag plastics service.

“We’ve been working with them for about three years, trying to get them to come to Minnesota, and they did decide to do that,” Brita Sailer, executive director of RAM, told Minnesota Public Radio in December. “The company does this all themselves. It’s just a fantastic program.”

With 3,000 farms currently utilizing the service and an average of between 400 and 500 dumpsters delivered to new farms per month, Murphy estimated the collection service will soon reach more than 5,000 farms.

Delta Plastics’ investment in the project has been in the millions of dollars, Murphy said, although he refrained from offering a specific number. The entire venture has been privately funded, he said.

“We’re taking it one step at a time, focusing on one or two states at a time,” Murphy said. “We’ll continue to expand as the need is there.