APR to bolster its work with brand owners 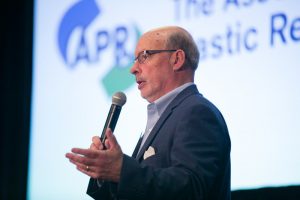 The Association of Plastic Recyclers will expand staffing to further engage brand owners on designing products for recyclability.

Steve Alexander, executive director of the Association of Plastic Recyclers (APR), told members that APR will expand its work with consumer brands to ensure they’re sending recyclable products into the marketplace.

A few weeks ago, Wal-Mart staff called and told APR officials the world’s largest retailer had a supplier claiming a combination plastic-metal product was recyclable, Alexander said. APR’s technical director, John Standish, clarified with Wal-Mart that it is not.

“Wal-Mart calling us directly to deal with a relationship with their suppliers and using us as an authority is exactly the place we want to be in as we go forward,” Alexander told the crowd.

In an opinion piece published last week in Plastics Recycling Update, Alexander detailed current efforts by the group to ensure a clean stream of packaging enters the recycling system. Those include the publication of, updates to and promotion for the APR Design Guide for Plastics Recyclability. APR has also created its Brand Owner Training Program, which provides companies with a customized review of their packaging and its impacts on the recycling stream.

Additionally, APR created a Consumer Brand Company group to improve communications between the group and brand owners, he wrote.

Kara Pochiro, APR’s communications director, said the group is currently looking to hire an additional staff person to focus on the design guide and the training program.

The next APR member meeting is scheduled for June 6-8 in Sacramento, Calif.