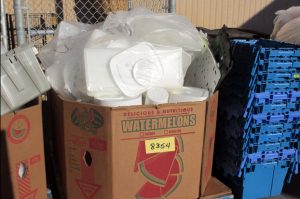 An increasing number of grocery chains are recycling rigid plastic containers through back-of-store programs, providing a clean source of HDPE and PP for reclaimers.

The Association of Plastic Recyclers (APR) has tracked 25 national grocery chains — or about 15,000 stores — since launching its outreach project, which aims to promote back-of-house plastic recycling at grocery stores. The project started five years ago, and today 10 of the chains have begun recycling rigid plastics in 4,500 stores in 32 states, according to APR.

Liz Bedard, director of APR’s rigid plastics program, said the effort is spreading through dedicated APR efforts as well as through word-of-mouth between stores.

Now, APR is looking to explore a different source of clean plastic: behind the pharmacy counter.

“It was formed with the idea that … there seems to be good legs under recovering plastic bottles from the waste stream, but not so much so with non-bottle containers,” Bedard said.

The committee soon discovered a substantial source of these materials behind the counter at grocery stores. APR estimated about 350 million pounds of rigid plastics with viable end markets were being generated in the largest national grocery chains each year. In the deli, bakery, seafood and other departments, white HDPE and PP containers are used to transport bulk food items into stores, but APR found that few stores were recycling them.

Today, virtually every grocery store in the country recycles OCC, but it took a long time to communicate that message, Bedard said.

“I think that’s a curve we’re on now, is just getting the message out, giving them the tools, helping them understand, and slowly but surely the message is getting out,” she said.

Little to no investment

The grocery program has focused on large chains, Bedard said, because most of them already have a backhaul process they use to recycle OCC and films.

“So we’re piggybacking on a system that’s already there,” she explained, noting there is virtually no investment for many of these stores.

Bedard identified three general levels of rigid plastics recycling engagement for grocery chains. The lowest and easiest level is to start recycling the plastic containers along with the rest of the materials for single-stream recycling, available at most stores.

But stores that want to make some revenue off the plastics can take it a step further. In its logistics guidelines, APR recommends stores stack their rigid plastic containers in a gaylord. Once it’s full, it can be backhauled and sent to market as is.

Then there are the stores that want to recover the most value from the containers and start baling them at distribution centers. That’s where an investment in balers may be needed. Some companies that use lower-end downstroke balers have upgraded to a horizontal baler after starting the rigid plastics recycling process, Bedard said.

Removing these containers from the waste stream can also reduce the strain on trash compactors, thus reducing maintenance costs.

Other avenues for growth

As the grocery setting sees continuing growth in rigid plastics recycling, APR is thinking about other sources of clean white plastics. One of them might be just down the aisle from the delis and bakeries: the pharmacy, and the stock containers that carry pills in bulk.

Similar to the grocery plastics, these containers provide a clean source of generally HDPE. APR is working on a guide to best manage a pharmacy plastics recycling program. It will discuss some of the issues around recycling prescription vials, which is more difficult than the bulk containers due to patient privacy laws.

Outside of grocery stores, Bedard pointed to food establishments in universities, hospitals and schools, as well as restaurants themselves, as potential sources for clean plastics.

“There’s been a lot of suggestions that maybe, eventually, this model could be applied in those applications as well,” Bedard said. 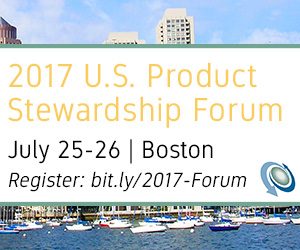