Processor to bring AI to PCB grading and sorting 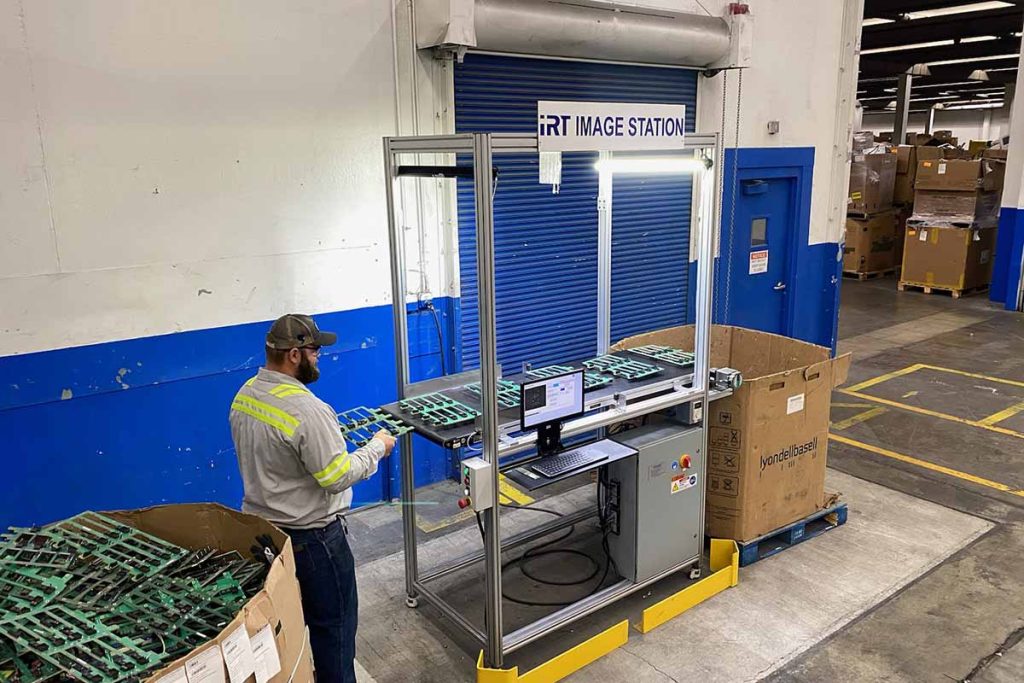 IRT is capturing high-definition photos of printed circuit boards so AI-powered software can learn to categorize them by precious metals content. | Courtesy of IRT

Integrated Recycling Technologies is developing an AI-powered app for its suppliers that will quickly categorize and price their scrap circuit boards before they ship them. The software will also power the company’s own robotic circuit board sorting system.

“The ability for our suppliers to have the information in hand whenever they want and to be able to train their sorters – or their supplier – I think it’ll be really beneficial for the entire industry,” Steve Budd, CEO of the St. Cloud, Minn.-based e-scrap company, told E-Scrap News in an interview.

The project is a new application for advanced visioning systems, deep-learning software and robotics, though the technologies themselves aren’t brand new. Curbside recyclables sorting facilities, plastics reclaimers and even e-scrap recycling companies have been using AI-powered robots to identify and quickly sort scrap moving down a conveyor belt.

But the system IRT is working on won’t sort materials by type – aluminum, steel, circuit boards, plastics, etc. It will quickly determine which of 53 categories of PCBs the material fits into, based on their gold content, and it will provide the current price, Budd explained.

Budd explained that IRT, which sources and prepares PCBs for shipment to smelters around the world, has had a metallurgical lab running for about a decade. The company currently has two full-time lab technicians focused exclusively on fire assays. Meanwhile, the company receives metals-content reports from refiners after they’ve processed material.

As a result, IRT has ample information on the metals content of different types of PCBs. It has about 6,500 different board assays with data on gold, silver, palladium and copper content. IRT sorted those assays into one of 53 different categories, with each category based on gold content. There is about a half an ounce of difference between each category.

Meanwhile, IRT, like other companies, has trouble finding employees for certain positions, Budd said, a situation he described last year in an E-Scrap News article about labor markets. Even though turnover has calmed down, IRT is constantly training people on how to sort PCBs.

The project started in June 2022. With the help of a team of outside engineers with expertise in high-definition cameras, facial recognition software and deep-learning technology, IRT is developing a system to automate the grading and valuation, he said.

To teach the system, IRT has been photographing PCBs at its facility, allowing the software to better recognize differences between boards, Budd said.

That imaging work is overseen by Josh Stangler, the company’s quality control manager, who is responsible for all PCBs coming into the facility, said Tony Celt, IRT’s vice president of sales and marketing.

“He is using our lab results and then he hand feeds the boards into the system for the specific category he is uploading,” Celt explained. “This is the first step for the deep-learning process. Once that is done, the robot and its technology will take over from there.”

“I’m really excited about the deep learning,” Budd said. “I don’t know a lot about it, but what I do know is it gets better and better; it’ll continuously improve.”

Rolling out a robot

IRT plans to roll out the capabilities in a phone app that suppliers can use to photograph their PBCs to learn their grades and IRT’s current pricing, as well as print packing slips and arrange shipping.

In a press release, Budd noted that the app will help customers understand the values of their materials, “allowing them to know what is profitable and what is not without the guessing game.”

The release stated that, once the electronic signatures are collected, IRT will hedge the gold, silver and palladium prices for customers, removing market volatility and pricing issues.

IRT will also use the capabilities to power a robotic sorting system at the St. Cloud plant, Budd said. The system, which likely won’t be ready until the end of 2023, will be called Automated Board Image Sorting, or ABIS.

It is envisioned to allow nearly fully autonomous material handling and sorting, Budd explained. A self-driving forklift will tip a box of PCBs into the sorting system, which will use a camera and a simple robot to sort the PCBs into different boxes or chutes.

The robot should be able to sort PCBs about twice as fast as a human, Budd said. When the boxes are full, an employee will barcode the box and the forklift will move it to an area where the PCBs await shredding down to 30 millimeters.

Budd is now estimating the total project cost, including forklifts, will be about $750,000, considerably less than his original estimate.

After the robot is up and going, Budd said, he envisions moving human sorters into new roles in the company.

“With the current labor market being what it is, we’ve got plenty of room for these guys to move into different aspects of the company, whether it’s ITAD or shredding,” he said.