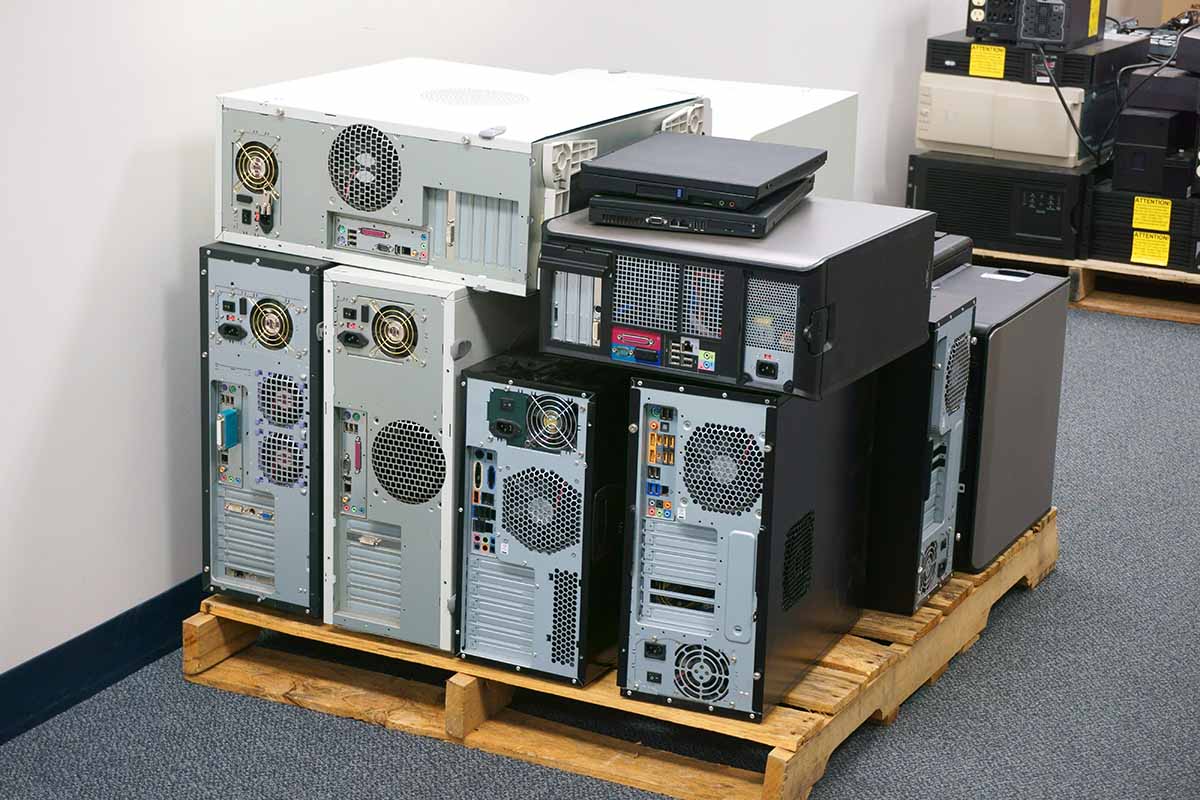 E-Scrap News spoke with a number of processors who have experienced dramatic market pricing shifts in recent months.| ND700/Shutterstock

Current discussions about the death knell of globalization may be hyperbole, but ITAD operator Andy Salzman is certain he’ll be selling more used electronics to domestic buyers than foreign ones in the future.

That’s partly because of reduced international demand tied to higher costs to move used electronics across the globe.

“In dealing with those clients that are overseas, it’s all about the freight, how much they can get in and out of the port,” said Salzman, senior buyer/wholesale manager at Kent, Wash.-based ITAD company 3R Technology.

Shifts in international buying of used devices and components are a key factor in the significantly lower prices that many processors and resellers are seeing today. In interviews with E-Scrap News, traders said they have seen pricing fall by double-digit percentages for some used electronics and components.

“This last three months has been a surprise,” said Michael Schuler, CEO and co-founder of Veterans Alliance Resourcing (VAR). “I have not seen the market take a crash like this.”

After COVID-19 struck North America in early 2020, prices for used electronics shot up. Employees and students scrambled to buy computer equipment and peripherals to work and study from home. At the same time, supply chain kinks made it difficult to bring new equipment to U.S. markets from factories overseas.

About a year ago, pricing started to cool, said Phil Biundo of ITAD company Filmar Technologies.

“You’ve got buyers telling you, ‘You can’t ask for that kind of money anymore. It’s not COVID prices,'” said Biundo, chief operating officer at Michigan-based Filmar.

For Salzman and 3R, the pricing story began changing last fall. He said total sales revenue in the first quarter of 2022 was down by about one-fifth year over year.

While shipping strife helped drive higher pricing in 2020, that reality is now having the opposite effect, with overseas companies seeking shorter, simpler supply chains.

3R’s buyers in Pakistan, China, Egypt and the United Arab Emirates (UAE) are all experiencing business and shipping disruptions, Salzman said. One of his best RAM and CPU buyers – located in China – is submitting lower bids because of the costs of moving freight west across the Pacific. The bids are less competitive compared with domestic offers now, he said.

And it’s not just east Asia. It used to be that a UAE customer of 3R would offer $80 for a laptop that would only fetch $60 from a U.S. buyer, but that international premium is totally gone now, according to Salzman.

Schuler of Austin, Texas-based ITAD and used device wholesale company VAR said he’s also seen decreasing bid values from overseas customers. During the last full week of May, he put 2,500 PCs out for bid, and “the offers I got back were half of what my target track says they have been worth.”

He pointed to a glut of supply and logistics problems hampering shipments to customers.

“This last three months has been a surprise. I have not seen the market take a crash like this.” – Michael Schuler, Veterans Alliance Resourcing (VAR)

At Pennsylvania-based ITAD company CyberCrunch, Serdar Bankaci noted that he’s seeing a slight value decline in lower-end laptops and desktops with third-generation Intel processors and older, with more pricing stability for the higher-end equipment with processors that are sixth generation and newer.

He estimated that, in the past four months or so, CyberCrunch has experienced price decreases in the range of 10-20%, particularly for those lower-end items (that would be a price decrease beyond the expected value drop from a device aging over time).

“A lot of this we think is because of the cost of moving the item,” said Bankaci, president of the  company, which is headquartered outside of Pittsburgh.

Global customers of used devices and components are also asking for new arrangements in the loads they’re purchasing.

A Pakistani buyer of PCs, laptops and RAM, facing skyrocketing costs, is demanding larger-quantity shipments than in the past, 3R’s Salzman said. Hoping to spark international interest, Salzman recently held onto some equipment longer so that he could prepare a larger shipment.

Biundo at Filmar Technologies said he’s seen international buyers become more selective and ask for more consistency. In developing countries, buyers previously would have purchased a mouse and keyboard without a monitor, but now they’re no longer quite as interested if the monitor isn’t included in the setup – and monitors happen to be an item Biundo sees a shortage of right now because enterprises are not returning as many to leasing companies or ITAD service providers.

Asian data centers have recently asked CyberCrunch to send server components, rather than an entire Dell server, and then they’ll assemble the server in Asia. That’s because those smaller components can be shipped via air freight instead of sea containers, Bankaci said.

“This is a request that, at least in my 10-plus years in this industry, I’ve never gotten,” Bankaci said in early May, “and I’ve gotten maybe five of them in this past month.”

In general, CyberCrunch has experienced greater interest from wholesalers for smaller units. “Everybody is trying to cut the freight costs,” he said.

VAR’s Schuler said he has also seen softening demand for larger units, with many of VAR’s typical container-load buyers of PCs choosing not to make bids on his recent PC offer.

He noted that, typically, about 70% of the equipment the company ships leaves U.S. borders, and its exported equipment tends to move through three major markets – China, Pakistan and the UAE. All three are reducing their appetite for material, with a variety of forces at play.

A series of sessions at the 2022 E-Scrap Conference in New Orleans this September will dive into key trends influencing markets for used devices as well as metals recovered in the e-scrap stream. Sign up for the event today!

“China has been closed down to some extent, the war has definitely impacted things in Europe, [and] we’ve had a number of things happen where traditional buyers in the Middle East have slowed down on their buying,” Schuler said. “So there’s a number of factors.”

To react to falling demand and prices in the international market, used device firms are in some cases putting renewed focus on the U.S.

On the supply side, trends in the domestic market are bringing more material to some processors and resellers. Workers are returning to office places, IT departments are clearing out stock and individuals are getting rid of old computers.

As this supply comes in, Salzman said he has been re-engaging with U.S.-based buyers, focusing on sending off smaller packages. The strategy also helped him find two new buyers in Texas.

“I’ve been breaking it into smaller lots and it’s already started to work – I’ve gained a couple of new clients that way,” he said.

And he’s putting additional effort into sorting RAM loads into more specific types of product, which has allowed him to charge more, he said.

“You’ve got buyers telling you, ‘You can’t ask for that kind of money anymore.'” – Phil Biundo, Filmar

Paul Baum, founder and CEO of Denville, N.J.-based PlanITROI, said his company didn’t see much of a price collapse in recent months, in part because it didn’t raise prices two years ago – a unit sold for $299 before COVID-19 sold for $299 immediately after COVID-19 struck.

Baum added he was disheartened to see some of the “significant price gouging” happening in some corners of the sector.

By keeping pricing steady, PlanITROI didn’t make as much money as competitors in the early months of the pandemic, but it also sold through inventory faster.

A couple other factors are allowing for price stability for PlanITROI.

The company is not export-reliant: It shipped 750,000 units last year, and less than 5% of them were exported.

About 95% of the refurbished laptops PlanITROI sells are sold to domestic customers looking for affordable technology, and U.S. markets for used equipment are less affected than the export realm. Most of PlanITROI’s refurbished computers are sold through mass merchants such as Best Buy, CDW, Office Depot, Staples, Walmart and many others.

Additionally, the company is participating in federally funded programs to provide computers to low-income people to help bridge the digital divide. Last year’s passage of the federal Infrastructure Investment and Jobs Act created the Affordable Connectivity Program, which will provide subsidies to low-income households to help them buy used computers through nonprofit organizations. PlanITROI is supplying refurbished computers through that and other state and federal programs, Baum said.

“So the demand is really, really high for students, small businesses and large organizations who are feeling the pinch of higher priced new laptops,” he said, “and the demand is just starting for the federal connectivity programs that are having a direct impact in these areas.”

With overseas demand drying up, PlanITROI is actually shipping used computers from developing countries back to PlanITROI’s facilities in the U.S. to fill orders. In fact, PlanITROI imported more used equipment, especially laptops and iPads, over the past two years than ever before, Baum said.

“Our refurbished, certified, direct-to-next-user business is still off-the-hook busy,” he said. “Our export business, like everybody else is telling you, is very, very bad right now.”

VAR’s Schuler said the domestic market is still showing pretty good strength. And he expressed optimism that pricing will return in coming months, saying he has a feeling “things will not only stabilize but I’m anticipating that in the third quarter things are going to rebound pretty nicely.”

And regardless of where pricing goes, the fact remains that any market shift also spawns opportunity. The loss of overseas markets is hurting PlanITROI’s competitors, Baum said, opening possibilities to acquire other companies and contracts.

“I guess the good news is we happen to be doing extremely well because of the type of buyer that we’d been selling to,” Baum said.