Industry comes back together at Chicago event 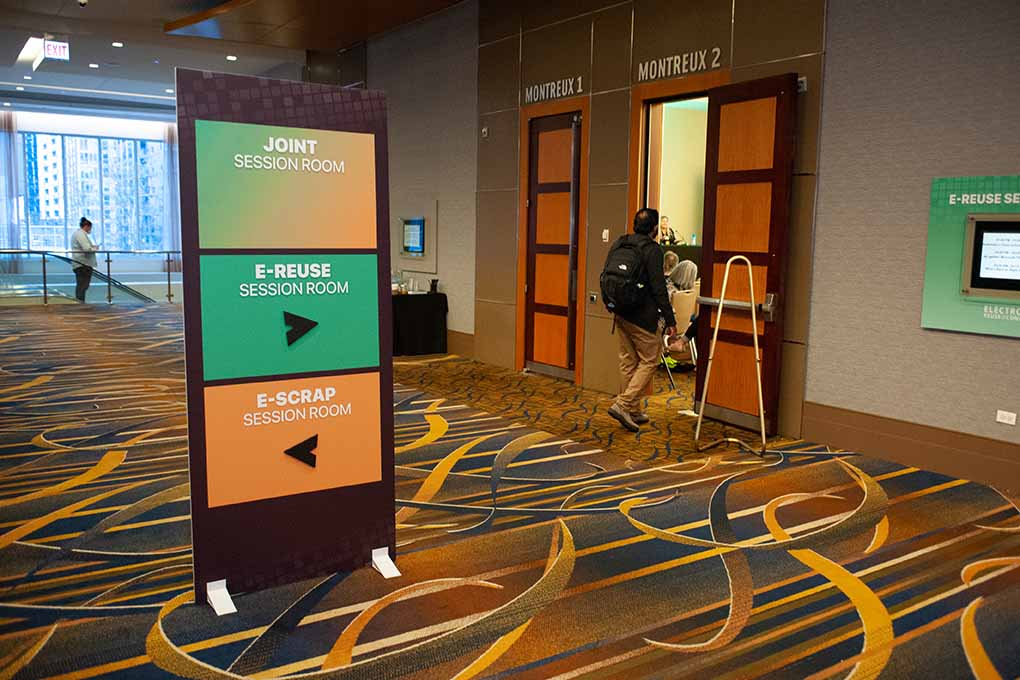 Hundreds of electronics recycling and reuse leaders gathered this week for a conference that explored how stakeholders have coped with COVID-19 – and detailed what comes next for the sector.

E-Scrap & E-Reuse 2021 drew roughly 950 attendees Nov. 8-10 to the Swissôtel in downtown Chicago. Another 150 attendees joined via app-only registration, which allowed them to virtually network with the full attendee group and also view pre-recorded video sessions.

The event was a joint venture between the E-Scrap Conference and E-Reuse Conference, two annual gatherings that had not been held in-person since fall 2019.

Ups and downs amid pandemic

The realities of operating electronics recycling and repair businesses through a global pandemic were front and center in the on-stage discussions in Chicago.

For many companies, challenges around staffing and logistics have come alongside bottom-line growth that has been fueled by high commodity pricing and demand for used devices and services.

In a session on labor markets on Nov. 10, Justin Carroll, founder and CEO of Virginia-based device repair business Fruit Fixed, said he is currently paying new hires $17 an hour, up from $10 an hour seven years ago. But he noted the extra cost on the payroll side has been offset by double-digit, year-over-year revenue growth.

The company now has seven stores across Virginia.

Though the company has to pay more to draw workers, it’s also seeing better productivity. “At higher wages, you are adding people you might not otherwise,” Carroll said. “You’re getting an employee putting more effort into what they do.”

While many operators are working to hire and retain staff members, they are also continuing to try to keep those employees safe. That is an issue that long predates the pandemic and has been complicated in recent years by the ever-increasing prevalence of lithium-ion batteries.

In a Nov. 8 session on robotics in processing, Kevin Dillon, chief marketing and sales officer at ERI, said the company has deployed artificial intelligence-based heat sensor systems in all eight of its U.S. facilities in the last 18 months. They help detect fires and are integrated with sprinklers to douse blazes quickly.

Meanwhile, ERI is researching X-ray tools that can identify batteries in incoming loads.

“We’re trying to reduce our labor costs and trying to protect our employees,” he said, noting that ERI’s companywide throughput is 275 million pounds a month. “That’s our focus.”

Eco-fee in the Midwest?

As operators have worked to evolve with markets and materials, state electronics recycling programs have also continued to shift.

In 2019, Illinois began implementing a significant update to its legislated program to help ensure manufacturer funding would be maintained through the year, regardless of how many pounds were collected.

In a session on Nov. 8, a regulator from Michigan said that state is looking at updating its program along similar lines.

Steve Noble, recycling specialist at the Michigan Department of Environment, Great Lakes and Energy, said a stakeholder group had been meeting virtually through the pandemic and had developed language for possible legislation, though “it has not seen the light of day yet.”

Noble said the proposal follows the approach that Illinois now has in place, but with a notable twist: an eco-fee on TVs that would be charged to consumers when purchasing new devices. Of the 25 state programs in place in the U.S., only California charges such a fee on purchases of new electronics. Eco-fees are widely used to fund e-scrap collection and recycling in Canada.

“It’s a nominal fee upfront so there would not be a charge [to residents] at the product’s end of life,” said Noble, adding that he expected more details on the bill to be revealed in the coming weeks. “Right now, I would say it’s got a 50-50 chance of passing. For the people of Michigan, I’d like to see it move forward as I think it will be a good benefit to them.”