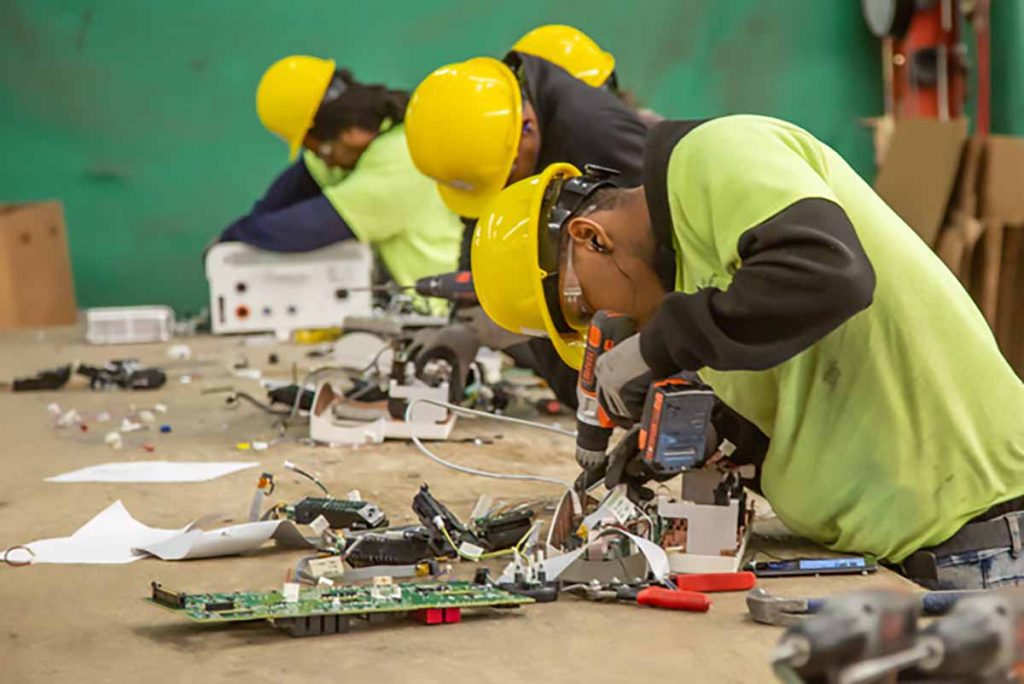 RecycleForce currently processes about 10 million pounds of electronics per year, a figure set to triple with the upcoming facility. | Mark Curry / RecycleForce

RecycleForce, an Indianapolis e-scrap operation that hires formerly incarcerated individuals, will build a new facility that doubles its existing space. The project will give the organization a permanent home after it has moved several times over the years.

RecycleForce currently operates out of a 55,000-square-foot space in Indianapolis. The nonprofit organization, which describes itself as a social enterprise, is currently planning development of a new facility that will total 102,000 square feet, allowing significant expansion in both recycling capacity and employment.

“It will triple what we’re doing right now,” said Gregg Keesling, president of RecycleForce, in an interview with E-Scrap News.

Keesling said the organization currently processes about 10 million pounds of electronics per year, and when the upcoming facility hits full scale he anticipates it will increase that figure to roughly 30 million pounds.

Beyond the capacity increase, and even more important for the organization’s mission, Keesling said the larger space will allow RecycleForce to expand the number of formerly incarcerated individuals it serves.

The next move will mark the fourth time the organization has relocated. Keesling described multiple locations the organization leased over the years. In each case, the neighborhood shifted while RecycleForce was there and ultimately it became too expensive to stay.

With the upcoming project, the organization will own the land and build the new facility.

“We’re going to put our roots down, so we can’t get gentrified out no matter what happens to these communities,” Keesling said.

The new site is somewhat fitting as an electronics recycling facility, given it formerly held a massive RCA television factory, which closed in 1995 and was demolished in 2017, according to IndyStar.

The project has a 13-month building schedule and it has not yet broken ground. Keesling said the project is being financed with a $13 million new market tax credit, a federal program that incentivizes economic growth through tax credits to attract private investment.

Handling a variety of materials

RecycleForce solely focuses on mechanical recycling services, shredding electronics from a variety of sources. The operation handles standard post-consumer electronics and has a drop-off collection option for local residents. It also brings in various devices from businesses in the area.

But a significantly growing stream for RecycleForce is the product return channel at nearby logistics sites. Indianapolis is home to major supply chain distribution centers – Keesling described the city as “the Silicon Valley of logistics” – and RecycleForce has tapped into the product return and recall stream from some of these large distributors.

“Every greenfield in our area is turning into a distribution center,” Keesling said.

That means the processor is constantly bringing in different types of products, which is part of why its focus is on shredding rather than repair and refurbishment.

RecycleForce sells its recovered commodities into a variety of markets – all of the steel it produces goes into rebar, for example – but until recently the organization had trouble with one component of the electronics stream.

“Plastic has always been the downside,” Keesling said. “For every couple circuit boards you get, you have a pile of plastic.”

Moving that material proved challenging for the organization in the past, but in 2019, RecycleForce found a consistent outlet in Brightmark, a chemical recycling company operating in nearby Ashley, Ind. That company currently takes all of the plastic RecycleForce produces and it converts the material into fuel, oil and wax products. 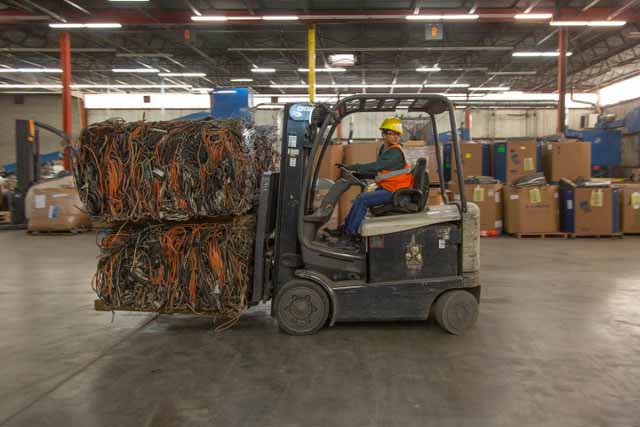 Keesling views the electronics recycling sector as well-suited to employing individuals released from prison, and his organization has been doing so for its 16 years in business. RecycleForce has laid out its model for re-entry employment, and the value that provides, on its website.

RecycleForce is not alone in coupling prison re-entry with electronics recycling. E-Scrap News previously profiled Homeboy Recycling in Los Angeles, and similar programs are in place at PAR-Recycle Works in Philadelphia and Tech Dump in St. Paul, Minn.

Keesling noted that beyond providing skills and workforce development opportunities to individuals, e-scrap employment of formerly incarcerated people reduces the need to spend on criminal justice overall because it helps ensure those workers find stability, instead of a path back to jail.

“We can shift our over-policing and spending on jails, and shift that into subsidizing recycling,” Keesling said.

Put more frankly, Keesling drew a parallel in how society neglects individuals with criminal records, and how society discards products.

“If we can reimagine our thinking around those two things, we can have a better world in many ways,” he said.