A look at where California’s CRT glass is going

Data shows that the total pounds processed through California’s electronics recycling program have been falling since 2012. | Boonchuay1970/Shutterstock

Over the past three years, fewer of California’s CRTs are going directly to hazardous waste landfills and more are flowing through intermediate glass processors, state data shows. But that may not mean more glass is ultimately being recycled.

One of the state’s largest e-scrap processors, ERI, suspects intermediate processors may be separating leaded from unleaded glass and then landfilling material.

In 2015, California’s electronics recycling program first enacted regulations allowing e-scrap companies to landfill CRT glass and still receive a processing payment from the state. Before that, the only way they could get paid the per-pound processing fee from state government was to send glass to an established final recycling outlet – lead smelters or CRT manufacturers – or to an intermediate glass processor. The new rules came as the world’s last major CRT manufacturer, Videocon, began reducing or eliminating the CRT glass it accepted at its Indian manufacturing site.

By the following year, landfilling had become a popular downstream option. E-Scrap News reported 45% of CRT glass handled by program participants in 2016 went directly to disposal sites. As of last year, that number had dropped to about 27%.

California’s 17-year-old Covered Electronic Waste (CEW) Recycling Program, the country’s oldest, is funded by fees consumers pay at point-of-sale. The state collects the money and provides payments to e-scrap companies collecting and processing covered electronic devices, which include CRT displays, LCD displays, laptops with LCD screens (including most tablets), plasma TVs and portable DVD players with LCD screens. The combined collection and processing payments are currently 49 cents a pound for CRTs and 60 cents a pound for non-CRT devices.

Total pounds processed through the program have been falling since 2012, when companies processed 212 million pounds. Last year, the number was just over 90 million pounds. CRTs are making up a smaller and smaller percentage, as well. In 2012, CRTs accounted for 98% of program weight; last year, CRTs were 69%.

What the latest numbers show

E-Scrap News recently requested CRT disposition data from the California Department of Resources Recycling and Recovery (CalRecycle), which administers the electronics recycling program. The data spans 2017 through the third quarter of 2019. 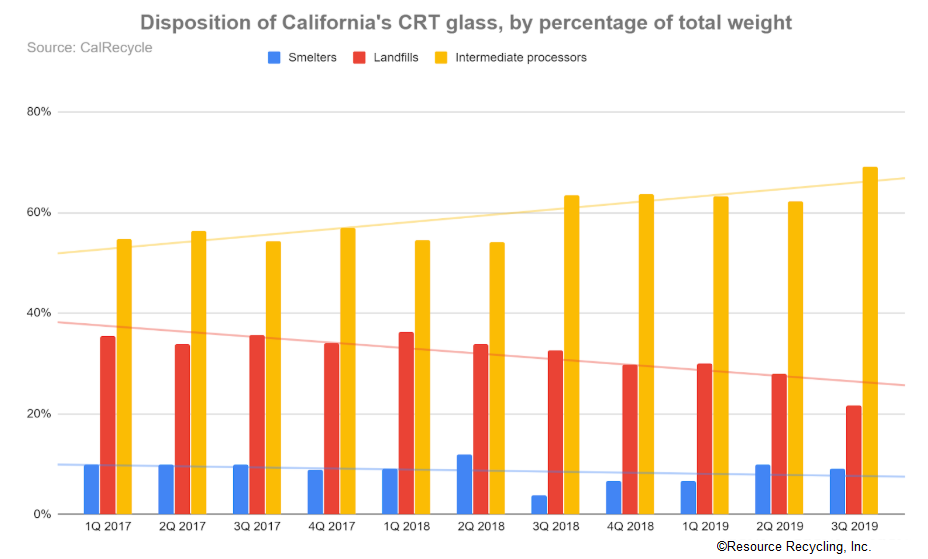 The following graph shows the changes in terms of actual weight (article continues below graphic): 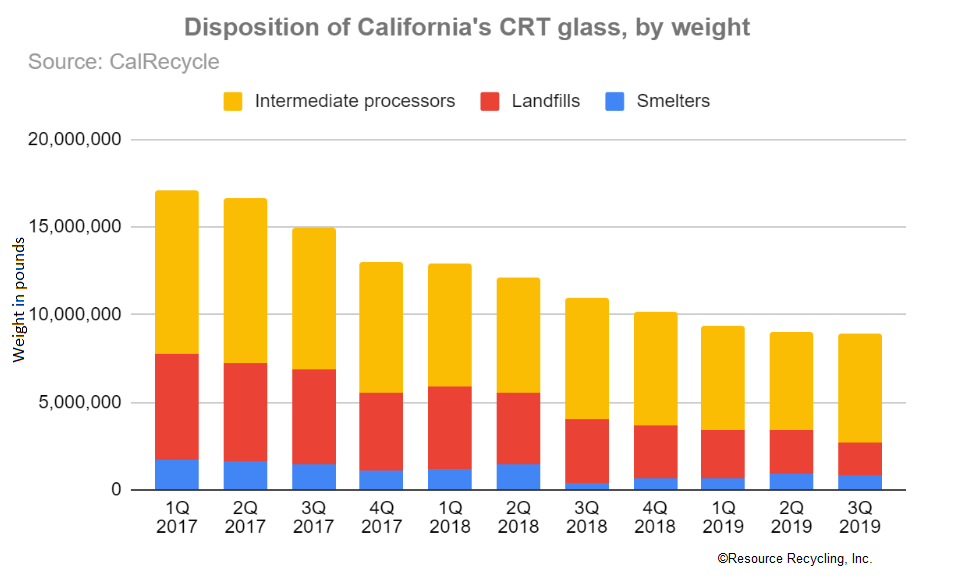 In each of the categories are specific companies jockeying for business.

When it comes to intermediate processors, in recent years four e-scrap companies have served that role, although two have dominated the weight.

Finally, two lead smelters have received unprocessed CRT glass from California e-scrap companies over the past three years. They are Korea Zinc’s Onsan Complex in South Korea (7.0 million pounds) and Doe Run in Boss, Mo. (5.0 million pounds). The last time Korea Zinc took in unprocessed glass from California was in July 2018, records show. Exporting CRT tubes or unprocessed CRT glass requires U.S. EPA notification and approval. According to the EPA, no company currently has approval to export to Korea Zinc.

Much may still be going to disposal

Ana-Maria Stoian-Chu, manager of CalRecycle’s Covered Electronic Waste (CEW) Recycling Program, emphasized that the department’s data only tracks a CRT’s initial downstream destination after it has been “canceled,” which means the display device has been stripped down to a bare tube and the vacuum has been relieved.

ERI is one of the largest processors of California’s CEW. In terms of CRTs, specifically, Blum said the company is handling about 500,000 pounds a month of CRTs. Currently, the company sends whole, bare tubes straight to hazardous waste landfill, he said.

With the loss of Videocon and state regulations limiting approved downstreams, options are few, he said. Smelters aren’t able to serve as solid downstream for the large quantities of CRT glass leaving ERI facilities, he said, describing smelters as “touch and go.”

But there are also advantages: The hazardous waste landfills are dependable, they’re heavily regulated and they don’t present volume limitations, Blum said.

“There’s really no other outlets for us to utilize in the state of California,” he said.

And with drastically decreasing tons of CRTs entering the end-of-life stream in California, he doubts people will invest in new CRTs processing options.

This article has been corrected to state that the Fairmead Solid Waste Disposal Site is a solid waste landfill, not a hazardous waste landfill.