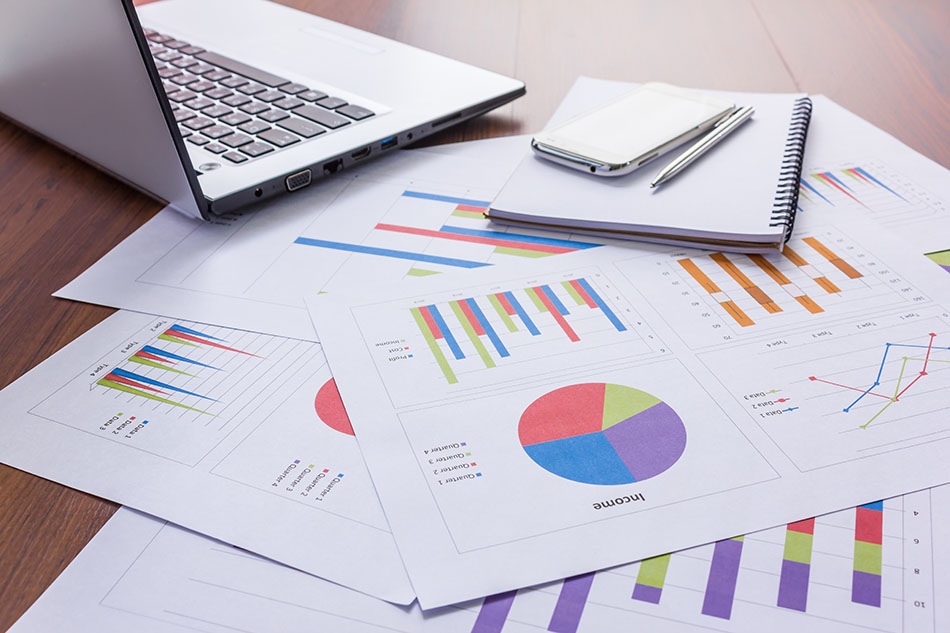 Outside of its ITAD division, Arrow is a massive supplier of electronic components and posted 2018 sales of $30 billion. | Suphaksorn Thongwongboot/Shutterstock

The shutdown of a major ITAD business has generated unprecedented response from fellow asset disposition companies, which are looking to pick up customers left without a service provider.

In the wake of Arrow Electronics’ announcement that it will leave the ITAD space, at least 23 asset disposition companies have issued press releases or taken out search engine ads directly or indirectly referencing the Arrow development.

Meanwhile, ITAD analyst Compliance Standards has charted some of the factors that led to Arrow’s departure, commenting that the company’s goals were impossible to hit. The market analysis firm predicts similar business retractions in the future.

“Arrow’s management to exit ITAD is a logical step that should be praised,” wrote David Daoud, principal analyst at Compliance Standards, adding that Arrow should “refocus on what it does best.” Outside of its ITAD division, Arrow is a massive supplier of electronic components and posted 2018 sales of $30 billion.

“But it is not the only one facing the same environment,” Daoud continued. “Many companies that followed a similar acquisition path will have to re-assess where they stand, and they will likely conclude that their ITAD unit does not fit well within their core business.”

Arrow Electronics on July 15 announced that it will shut down its ITAD division, Arrow Sustainable Technology Solutions. In a brief call with investors, company leaders referenced a figure of about $17 million in second-quarter pre-tax operating losses from the ITAD division.

Arrow was a major player in the ITAD sphere. According to Compliance Standards, at the time of its closure, Arrow had reached 23% “broad market penetration,” up from 10% just four years ago.

In the days after the announcement, at least 18 ITAD competitors issued press releases or published announcements on their websites related to the closure, most of them referencing Arrow by name. Most of the companies are U.S.-based, with a few global competitors weighing in as well.

ERI appears to have been the first to take this step, stating one day after the announcement that ERI is extending an “open invitation to former customers of Arrow Electronics” to use ERI as an ITAD provider.

Other companies framed the situation as an opportunity for former Arrow customers to improve ITAD services. “Sometimes being forced to look in a new direction leads us to a better place,” ER2 wrote on its website.

CyberCrunch took the additional step of offering a special price for former Arrow clients. The company said it will “welcome former Arrow Sustainable Technology Solutions customers by offering a 25 percent discount to their existing contracts through the end of 2019 with agreed upon contract extensions.”

Metech Recycling issued a call to former Arrow clients, but also commented on the challenges associated with the business model employed at Arrow.

“Unless a company is committed to directly managing more of the entire lifecycle of your electronic and ITAD products, they will be forced to utilize partner companies for the services they do not offer under their own roof,” Metech wrote, adding that “this will increase overhead while decreasing the overall profit derived from the materials.”

The following is a list of companies that have made announcements in the wake of Arrow’s closure:

Some companies took out Google ads referencing the Arrow closure, including All Green Recycling, CCNY Tech, Green Chip Recycling, Liquid Technology, Sims Recycling Solutions and Transpere. Less direct ads were taken out by companies such as Hobi (which asked, without naming Arrow, “ITAD company left you hanging?‎”) and Wisetek (“Need an ITAD Partner?”). 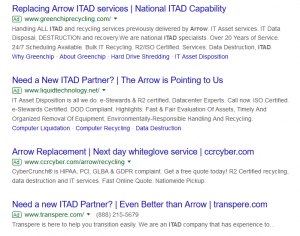 Ads referencing the closure of Arrow’s ITAD division have appeared on Google during the past week.

Additionally, Cascade Asset Management published a guide on switching ITAD vendors, including numerous tips on how to make the transition as seamless as possible. Cascade CEO Neil Peters-Michaud wrote directly about Arrow’s closure and published a Q&A with Kyle Marks of Retire-IT, an ITAD consulting firm, about what lessons customers should take away from the Arrow situation.

Although it may have been a shock for many in the industry, Daoud of Compliance Standards wrote that Arrow’s ITAD division closure was “necessary” and “even overdue.” Daoud wrote that the company’s “initial goal of dominating enterprise ITAD was not and could not be reached.”

He and other analysts point to Arrow’s business strategy as a key component of its challenges. During the past decade, Arrow quickly grew in the ITAD field through a number of acquisitions. But according to analysts, the process of integrating those companies under a corporate model was problematic.

“When corporate gets involved in setting expectations that are mismatched with the reality on the ground and with the sector’s requirements, the integration becomes a liability,” Daoud wrote.

He offered the example of reports and online tools customers might received from a smaller ITAD firm. After an acquisition and integration into a larger company’s business operations, those types of services might change.

“It gets even more complex when there are several acquired companies that end up with one unified platform, but one that customers may not necessarily like or endorse,” Daoud wrote.

Marks of Retire-IT wrote an analysis of the closure from his perspective as a former Arrow customer and Arrow employee. Marks worked for a company that used multiple vendors that were ultimately acquired by Arrow, leading Marks’ company to deal with Arrow directly. Later, he was hired by Arrow to oversee the company’s post-acquisition integration with US Micro.

Marks argued that Arrow’s model of acquiring individual firms and then “commoditize ITAD” contributed to its ultimate retreat from the market.

The former president of a company that was acquired by Arrow also weighed in on the acquisition and integration model, noting that the business environment was “different from the start” under the new ownership.

“My new colleagues discussed our customers as if they were suppliers,” wrote Robert Houghton, former president of Redemtech, which Arrow acquired in 2012. Houghton, who founded and is CEO of Sage Sustainable Electronics, added that “our new owners took a cookie-cutter approach to providing services.”

Houghton said that Sage is “temporarily accepting the terms and conditions of existing Arrow customer contracts, and will onboard new customers at warp speed to help them avoid a disruptive interruption of critical IT asset disposition services.”