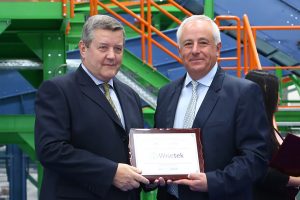 ITAD firm Wisetek has partnered with a Dubai-based e-scrap company, the latest example of companies from different countries joining together to serve a wider market.

Ireland-headquartered Wisetek this month announced a partnership with Enviroserve, which operates a 280,000-square-foot recycling plant that includes e-scrap and ITAD capabilities in Dubai, U.A.E.

Under the agreement, Enviroserve will be Wisetek’s “exclusive service partner for the Middle East region,” according to a press release from Wisetek.

“Wisetek’s expansion into Dubai, which will be the company’s primary hub for the Middle East and Africa region, is a new milestone in development of its international footprint,” the release stated.

The agreement essentially allows Wisetek’s clients who need ITAD services in the Middle East to do so through Wisetek, working with a single company rather than having to connect with multiple firms. Enviroserve has a similar partnership with U.S. processor ERI.

A variety of other companies have announced similar deals of late to grow their ITAD footprints across the globe.

A session on global expansion in ITAD will be part of the agenda at the 2019 E-Scrap Conference and Trade Show this September.

On the Wisetek-Enviroserve agreement, financial details were not disclosed.

The companies have been working together on Enviroserve’s recycling facility as the site has been in development, with Wisetek helping to launch ITAD services at the location. The massive facility is currently in its “final stages of commissioning,” according to the latest release.

Besides the Dubai agreement, it’s been a time of growth for Wisetek’s U.S. operations as well – the company grew from one U.S. location in 2018 up to five as of earlier this year.

Wisetek previously strengthened its position in the U.S. market through a partnership similar to the Enviroserve agreement, working with Hyattsville, Md.-headquartered Computer Discounters Inc. to provide a greater service area.