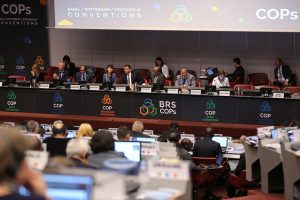 Final adoption of key international guidelines for e-scrap exports was once again punted as debate drags on over the definition of “repairable” devices.

The Basel Convention on the Control of Transboundary Movements of Hazardous Wastes and Their Disposal, which went into effect in 1992 and is supported by the United Nations, is an international pact that has the goal of limiting trade in hazardous wastes, especially between developed and developing countries. The United States has signed but not ratified the agreement, meaning it did not have a vote in last week’s discussions.

Basel countries have been deliberating since at least 2015 on technical guidelines to help countries that are party to the convention set their own national policies on e-scrap imports and exports. During the biannual Basel meeting of parties, which brings together all 187 countries, the guidelines were passed on an interim basis in the past two conferences (2015 and 2017).

Once again, during the 2019 conference held April 29 through March 10 in Geneva, Switzerland, the Basel countries “adopted, on an interim basis, the e-waste technical guidelines, which have been ‘in the works’ for some years now,” wrote the International Institute for Sustainable Development (IISD) Reporting Services division, an independent organization that provided detailed summaries of Basel conference activities.

“This was a compromise reached in order to allow time for the guidelines to be amended to ensure no loopholes remain,” the organization continued.

The guidelines were not finalized because of a key sticking point, one that has come up multiple times over the years: the language for what constitutes a repairable device, and how those devices are treated.

The Basel e-waste guidelines adopted on an interim basis include a section stating that devices will not be considered waste (and therefore won’t come under the purview of Basel controls) if they are destined for “failure analysis, or for repair or refurbishment with the intention of reuse … ” or several other scenarios. There are several steps shippers must take to prove the device falls into that category. But this section of the guidelines has raised significant concern among some Basel party countries, as well as environmental advocacy organizations.

The Basel Action Network (BAN), a watchdog organization focused on e-scrap exports, has long opposed the language surrounding repairable devices. In a release, BAN wrote that the exemption “would allow traders that claim their exports were for repair to avoid the trade controls of the Convention, which normally calls for countries to be notified before receiving such wastes and provides them with the right of refusal.”

However, proponents of a looser definition of repairable devices say overly strict language could deter refurbishment and reuse, and send repairable devices to disposal. For instance, the U.S. commented on the guidelines during a 2017 deliberation period.

“Guidelines that consider reusable goods as wastes could significantly impede trade in used equipment legitimately sent for repair or refurbishment by subjecting such trade to unnecessary procedures,” U.S. officials wrote.

BAN has issued an alternative set of guidelines, which are far more stringent about what constitutes a working device. Under BAN’s proposal, if a device is not “fully functional” and if any part of it is destined for disposal or recycling, the device is considered waste and falls under Basel controls.

According to a draft of the agreement voted on at the recent conference, the Basel parties acknowledge the need to address concerns “on the distinction between waste and non-waste to advance the work towards the finalization of the guidelines.”

In the meantime, according to the draft approval, party countries are invited to use the interim guidelines on a pilot basis.

In its summary of next steps, IISD included an “attempt to resolve long-standing impasses in the e-waste guidelines” as a significant priority for the group prior to the next gathering in two years.