What’s on the horizon for the e-scrap sector? 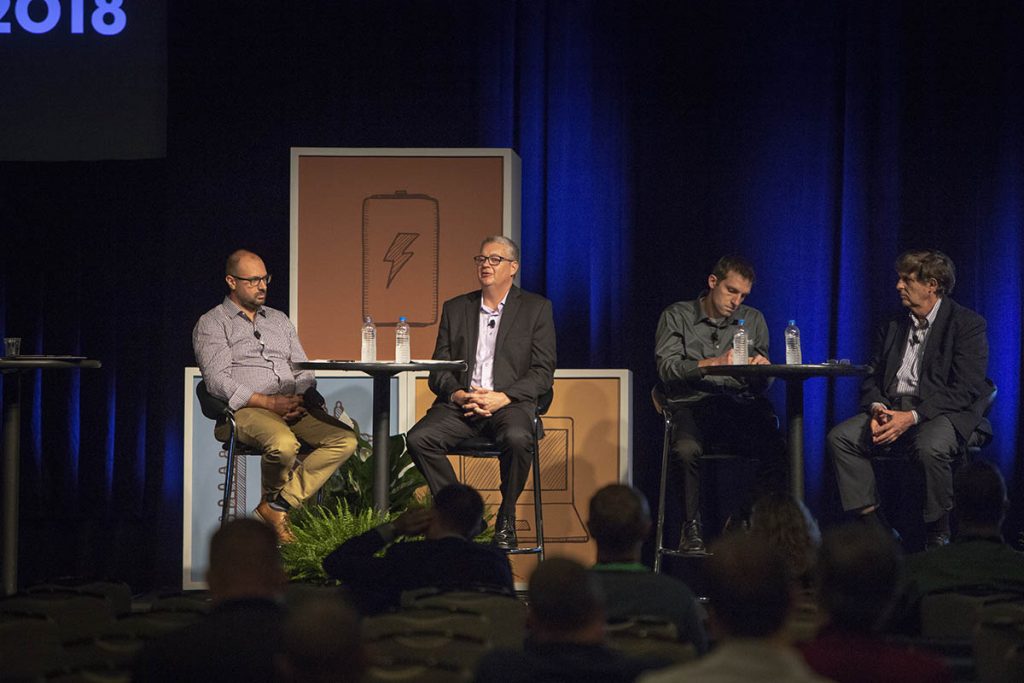 Material markets have shifted over the past year, but commodity pricing is just one of myriad forces that are constantly shaping and reshaping the e-scrap and ITAD sector.

Equally as impactful are changes in device design, growing safety and data security concerns, adoption of downstream tracking techniques, and a shift in the fundamental business model for e-scrap processors. In the closing plenary session at the 2018 E-Scrap Conference in October, a handful of speakers held an off-the-cuff discussion covering these and other trends that are impacting the electronics recovery industry.

A variety of forces over the past year have created a different market dynamic in the industry, Curtis said. A lot more material is staying in the U.S. due to China’s import policies, tariffs coming into effect, Russian sanctions and more.

“I think, in some cases, it’s going to be very difficult to sell certain items, certain grades of scrap,” Curtis said. There will be wider fluctuations in scrap pricing, he said, and he anticipates China’s policies will only continue to tighten.

“Everything before was kind of sent off, and now I think there’s some gaps in the market, and I think it’s going to create a lot of opportunities for more jobs … and taking more responsibility for the stuff we’re generating.” – Miles Harter

Curtis noted non-ferrous metals and scrap plastics have been hit particularly hard. They will continue to be hard to move, “and they’re also going to be at a much lower value than historically.”

For some companies, he added, the further decline in commodity markets could be the final straw that sends them under. But for operators that have diversified their sales avenues, they’ll have the flexibility to weather the storm.

Dynamic has worked to combat the impact of lower commodity values in multiple ways. Pricing and world events are difficult to predict, Harter said. But in some cases, the new market situation presents opportunities amid the stress.

“Everything before was kind of sent off, and now I think there’s some gaps in the market,” Harter said. “And I think it’s going to create a lot of opportunities for more jobs … and taking more responsibility for the stuff we’re generating.”

Schafer agreed there could be a silver lining to the China issue.

“Once you come out of this at the other end of it, you’re less dependent and you have more alternatives,” he said.

Plastic has been particularly hard hit by the market downturn. A large amount of the plastic recovered from e-scrap was previously shipped to Chinese buyers. That is no longer an option for many U.S. companies because of the Asian country’s import restrictions.

Meanwhile, the value of scrap plastic has further decreased as oil prices have dropped.

The market pressures have reached the point where it can be more cost effective to landfill plastics because it’s so difficult to find markets for the material. But this is often at odds with what e-scrap generators want. The question, then, becomes who will pay the higher cost to recycle that material versus landfill it.

“Somebody has to bear that cost, and most likely it’s going to be the upstream customer,” Bankaci said.

Schupan has found markets for its scrap plastic, Curtis said, but it’s unclear how existing markets will pan out long term. All speakers agreed the downturn will likely force innovation in the domestic landscape. 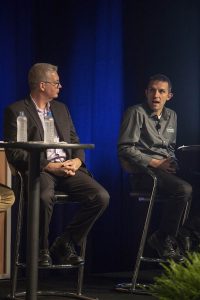 Lithium-ion batteries are another challenging item, not due to market fluctuations but because of concerns over safety. The batteries have ballooned as a safety hazard in e-scrap facilities, as well as materials recovery facilities (MRFs) handling the municipal recycling stream.

“I think the biggest thing, at least for us, is staying on top of it, getting proactive, with a little bit of paranoia, honestly,” Harter said.

Speakers agreed that safety-focused regulation on the manufacturing of batteries would be a proactive way to cut back on fires. They also discussed future factors that will compound the safety concerns. For example, internet of things (IOT) devices are becoming more common – Schafer said Gartner estimates in the next few years there will be roughly 26 billion IOT devices produced – and many contain lithium-ion batteries.

“The challenge we’re talking about here is multiplied several fold,” Schafer said. “I think we’re still in the early days of that challenge.”

One of the chief concerns expressed was certified companies caught not following the practices required by the standard body. When this happens, Dumes stated, it hurts the credibility of the certification standard.

Bankaci said it would be helpful if the standards organizations provided more assistance in educating e-scrap companies’ upstream customers about certification. He said it’s important for companies to consider why they are getting certified when they’re looking into it.

“What are you looking to accomplish with that certification? Are existing customers asking for it? If they’re not, why? Why do it?” he said. “Once you have the customers in place that want the R2, I think that’s when you go for it, because it’s expensive, especially for the smaller guys.”

Although it’s a financial undertaking, getting certified can also be about reducing brand risk for clients, Schafer said, describing it as “almost invaluable.” If a data breach happens, the customer wants to be able to say every precaution was taken, including using certified service providers.

“A lot of times we smooth over the bad actors, in a sense, and say ‘Well, they won’t be around forever,’ but the truth is, at least for us, a lot of them come and go. While they’re there, they can hurt you.” – Adam Dumes

A new trend is emerging on the heels of several high-profile investigations and reports from the Basel Action Network (BAN), which uses GPS tracking devices to monitor downstream movement when devices leave e-scrap collection sites. The investigations have been part of BAN’s E-Trash Transparency Project, which names companies allegedly exporting e-scrap devices to developing nations.

Now, BAN and other service providers are offering voluntary GPS tracking to companies to monitor device movement for themselves.

Two companies represented in the plenary session, Dynamic and Schupan, have employed voluntary tracking services. Doing so tells clients the company has absolute confidence in its downstream network, Harter said. 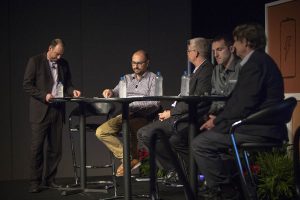 Much of the impetus behind certifications and trackers is to make it more difficult for “bad actors” to operate. Although speakers agreed these operations represent a small portion of the industry, the panel also agreed it’s important to focus on them, because they have the potential to deal hard blows to the industry’s reputation.

“A lot of times we smooth over the bad actors, in a sense, and say ‘Well, they won’t be around forever,’ but the truth is, at least for us, a lot of them come and go,” Dumes said. “While they’re there, they can hurt you. You’re trying to do things the right way, and you’re at a competitive disadvantage. So they go out of business, but the next one comes.”

As margins go down amid declining commodity values, device lightweighting and increasing complexity, e-scrap companies are increasingly adjusting the cost responsibility for recycling.

Gartner is already advising e-scrap customers to not expect a check from their service provider, and, in fact, to be prepared for an invoice. Schafer noted that there will be pushback from customers, and that there will always be competition from small collectors either accepting material for free or offering to pay generators. But Schafer cautioned that doing business with those operators carries major risks.

“You certainly want to focus on value for money, but at the end of the day, the bottom line is it’s all about your brand,” Schafer said. “And the last thing you want to do is have your brand splattered on a 60 Minutes exposé, that either your assets are in a landfill in Africa somewhere or your data is for sale on the internet.”

Bankaci noted that there’s more understanding of the cost equation at the enterprise level but less in the smaller sectors.

Controversy on the horizon

There are plenty of hot issues and controversies in the e-scrap world, and the panelists made it clear controversy is not leaving this industry anytime soon.

Unsurprisingly, device stockpiles popped up as a likely ongoing and potentially increasing problem. Responding to a quick poll, half the panel felt an e-scrap stockpile will be designated a Superfund site in 2019. Superfund law, officially titled the Comprehensive Environmental Response, Compensation, and Liability Act (CERCLA), designates highly contaminated areas as priority sites that can receive federal resources to help with cleanup efforts.

“We all know they’re out there. It’s just a matter of if they’re uncovered next year or the year after that,” Curtis said.

“I expect a data breach coming from an R2- or an e-Stewards-certified company within the next year.” – Serdar Bankaci

Bankaci, offering a counterpoint, noted electronics were simply disposed of in landfills for 20 or 30 years. Therefore, he doubted any e-scrap stockpile would be designated a Superfund site.

Bankaci said his biggest concerns are in data destruction. A lot of e-scrap operators have come out of the scrap metal world, he noted, and technology is becoming increasingly complex. Many companies just don’t have a full understanding of which devices contain data and which data removal methods should be used.

“I expect a data breach coming from an R2- or an e-Stewards-certified company within the next year,” he said, recalling an instance when a certification auditor didn’t know what a degausser was. Bankaci applauded the e-Stewards standard for working with the National Association for Information Destruction (NAID) recently. But he still expressed pessimism about data security and recycling in the near future.

“Something’s going to happen, and it’s going to damage all of our reputations, in my opinion,” he said.

Schafer agreed but offered a different take: A large-scale data breach from an e-scrap or ITAD company’s practices could be good for a heightened focus on data security in the industry.