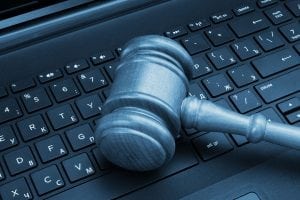 Brian Brundage signed a Sept. 18 agreement with prosecutors pleading guilty to one count of wire fraud and one count of tax evasion. His trial, which had been scheduled to start in early November, has been cancelled.

Brundage is the former CEO and co-owner of now-defunct Intercon Solutions, located in Chicago Heights, Ill. Around 2015, he left and started EnviroGreen Processing, a Gary, Ind. e-scrap company where he served as owner and CEO.

In 2011, the Basel Action Network (BAN), an exports watchdog group, accused Intercon of exporting e-scrap to Hong Kong. At the time, Intercon was going through the process of becoming certified to BAN’s e-Stewards standard. Intercon subsequently filed a defamation lawsuit against BAN. A judge dismissed the case in October 2015.

“The wheels of justice turn very slowly but they have finally turned,” Jim Puckett, executive director of BAN, said in a statement sent to E-Scrap News.

According to the plea agreement, Brundage represented to the public and customers that Intercon and EnviroGreen were disassembling devices and recycling, destroying or selling the components, and that Intercon engaged in “absolutely no reselling, no remarketing, no landfilling, no incineration, and no exportation.”

Based on these claims, several private companies and governmental entities contracted with Intercon and EnviroGreen to process their scrap material. The Chicago Tribune reported his clients included Texas Instruments, Tribune Company and the U.S. Department of Energy, among others.

“Rather than disassemble, recycle, and/or destroy all of the materials that upstream customers sent to Intercon and EnviroGreen, Brundage regularly resold and caused to be resold most of the materials in whole form to various customers,” the agreement states. “Further, Brundage knowingly sold substantial amounts of e-waste and other materials, including potentially hazardous cathode-ray tube (CRT) glass and batteries that Intercon had been paid to recycle, to downstream vendors whom Brundage knew would ship the materials overseas, despite Intercon’s representations that it engages in ‘absolutely no exporting.'”

The agreement also states Brundage stockpiled and landfilled thousands of tons of e-scrap, including hazardous materials, that he was unable to resell. For example, thousands of CRT monitors and TVs were being stored next to Intercon’s warehouse when, around 2011, Brundage directed employees to clear them out. The work involved smashing and landfilling them.

“As a result of the materially false and fraudulent misrepresentations made by, and caused to be made by, Brundage, Intercon and EnviroGreen obtained millions of dollars in money and property from their customers,” the agreement states.

Brundage admits the fraud involved 10 or more companies, although the documents don’t name them.

Between 2008 and 2015, he sold calculators that Intercon had been paid to destroy and recycle. He obtained about $2.4 million from the sales, directing an unnamed individual to use the money to pay Brundage’s personal credit card bills, make payments on a personal loan and repay others he owed money, according to the agreement.

Additionally, between 2005 and 2015, he had Intercon spend more than $445,000 toward his personal expenses, including nanny and housekeeper wages and reimbursements, jewelry purchases and payments to a casino.

He filed fraudulent tax returns for each year from 2008 through 2015. The tax evasion charge he pleaded guilty to involves filing false returns for the 2011 calendar year.

The two counts are punishable by fines and a combined maximum of up to 25 years in prison. The U.S. Attorney’s Office and Brundage’s defense attorneys disagree on how the sentencing recommendation should be calculated. The judge will decide the sentence later.

Legally, the judge must also order restitution to the victims, although it’s unclear how much of that money those companies will see. At the time of his arrest in December 2016, Brundage estimated his net assets at $15,500, and both of his attorneys are court-appointed.

According to the plea agreement, prosecutors and Brundage’s attorney agree that he owes restitution totaling $1.28 million to five unnamed companies and restitution to the Internal Revenue Service (IRS) totaling $744,000.

With the exception of several days after his December 2016 arrest, Brundage has been released from custody on bond. The U.S. Attorney’s Office had argued he was an extreme flight risk and should be detained until the trial. After Brundage’s father posted his own Tampa, Fla. condo as bond, the judge ordered his release.