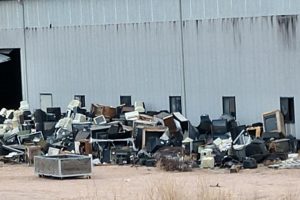 E-scrap materials, including CRT glass, sit abandoned in rural Wyoming, with the site’s former owner in prison and regulatory agencies still working to determine who should handle a cleanup.

As the conversation slowly moves forward, piles of scrap electronics remain inside and outside the vacant facility about 20 miles from Cheyenne, Wyo., and the site has experienced a fire.

At least one neighbor is tired of the mess.

“Nobody wants to pay for it,” said Melissa Zak-Armistead, who lives on 30 acres next to the site. “So instead, it just keeps sitting out there.”

The facility, formerly operating as Tatooine Electronic Systems, abruptly closed its doors in July 2014, when its owner was arrested on several counts of sexual assault and sexual offense. Jeffrey Stumpf was sentenced to 20 to 25 years in prison, according to local news accounts, a term he is currently serving.

In the meantime, electronics including unprocessed CRTs and CRT glass remain on the property. The situation is relatively rare among e-scrap stockpiles, which are often abandoned because operators have trouble moving material to downstream outlets. This case is also distinctive because there does not appear to be a viable responsible party, and no litigation is underway to compel parties to pay.

According to a Wyoming Department of Environmental Quality (WDEQ) estimate, the property holds between 100 and 150 tons of unprocessed e-scrap, as well as a handful of gaylords of crushed CRT glass.

“It was kind of a surprise to us when Mr. Stumpf was arrested,” said Luke Esch, administrator for WDEQ’s Solid and Hazardous Waste Division, in an interview with E-Scrap News. “That was a bit of a shock to everyone.” 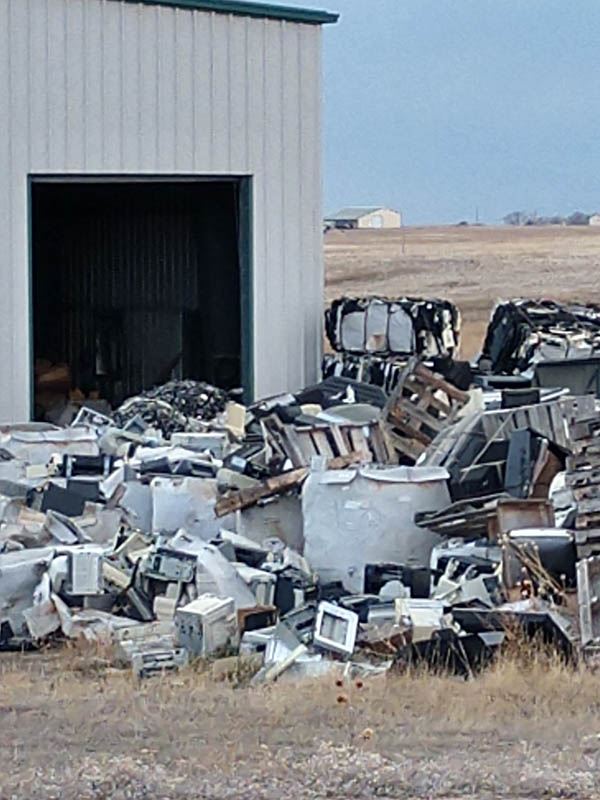 WDEQ had taken regulatory action against the company multiple times before its closure, including one violation for operating without a permit in 2011. In 2013, the agency ordered Stumpf’s facility to begin removing 400 tons of CRT glass and CRT devices from the site, in order to meet the federal CRT rule, which requires e-scrap entities to move at least 75 percent of the CRT glass they possess to downstream outlets each year.

WDEQ inspector Joel Frost told E-Scrap News the company documented the removal and disposal of roughly 450 tons in 2013, complying with the request. The weight included 209.5 tons of leaded glass and 241.44 tons of plate glass, Frost said.

The agency’s position is the former business owner is liable for the remaining material, despite the fact he’s behind bars.

“From the state’s perspective, if Mr. Stumpf is still the owner of the site, it’s his responsibility to clean up the site,” Esch said. “We don’t assume responsibility for folks to walk away from their contamination.”

But given Stumpf’s clear lack of ability to facilitate that cleanup, WDEQ in 2015 began talking with the U.S. EPA about alternative options. The agencies conducted a joint inspection of the site in 2016, and during that summer the EPA’s emergency response team joined WDEQ on an “emergency response removal of hazards that posed an immediate threat,” Katherine Jenkins, EPA Region 8 spokeswoman, told E-Scrap News.

“The hazards identified were containers of elemental mercury which were being stored in refrigerators on-site,” she wrote in an email.

The agencies conducted another site investigation in October 2016, and they noted there were two warehouses and nine semi-trailers staged at the facility containing e-scrap, including TVs and computer monitors.

“EPA and WDEQ determined there was no longer an immediate threat that required continued EPA Emergency Response involvement and that WDEQ would address any remaining concerns,” Jenkins wrote.

Esch said WDEQ and EPA have remained in contact about the stockpile. “Our conversations have continued about how we can best address the site,” he explained. “That’s kind of where it’s remained.”

Other nearby authorities are mostly removed from the cleanup discussions. 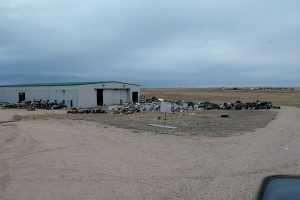 Laramie County Attorney Mark Voss said in an email that the county “cannot regulate this type of material/waste, as we are preempted by state law.” The county is not involved with any cleanup actions or disputes over ownership of the property, he noted.

The city of Cheyenne is one of Tatooine’s former clients, but it is similarly not involved in the cleanup conversation. However, as part of Tatooine’s contract with the city, the company was required to maintain a certain level of insurance. The contract requires “Environmental Impairment Liability” coverage, which can be used to pay for claims arising from environmental hazards and cleanup costs. The minimum coverage requirement was $1 million per occurrence.

It’s unclear why that coverage has not been invoked. The Cheyenne City Attorney’s Office said it was looking into the contract, but no clarifying information was available by press time. Esch said WDEQ wasn’t aware of any insurance covering the facility for cleanup costs.

The Wyoming facility is located on property owned by Stumpf, so there is no landlord to take on the problem, which is what has transpired in other e-scrap abandonment cases. There is a current mortgage on the property, but the bank involved with the mortgage does not appear eager to seize the property.

“We’ve had several discussions with the bank, they’re well aware of the extent of the contamination out there,” Esch said. He did not disclose the name of the bank.

DEQ’s understanding is that the bank has not foreclosed on the property and has retained its mortgage interest, despite Stumpf serving a prison sentence and mortgage payments ostensibly not current.

The cleanup stalemate could be broken thanks to legislation passed by state lawmakers during the 2018 session.

The state House of Representatives and Senate passed Senate Bill 18, which provides dedicated funding to clean up locations that are officially designated “orphan sites.”

“This is the first instance we’ve had a reliable source of funding we can use to investigate and remediate when there is no responsible party,” Esch said.

There are currently 13 sites in remediation under the orphan site program, he said, and another 10 that are awaiting investigation and remediation.

“If we can’t find another option to address it, it will likely fall under the orphan system program and get prioritized and remediated under that,” Esch said.

He said there’s no way to give an accurate estimate of how long that could take, because there is a system of prioritizing orphan sites. Projects are given priority based particularly on whether groundwater is contaminated. Many of them are dry-cleaner sites, where there is a strong chance of groundwater contamination. WDEQ has not tested groundwater for contamination from the former Tatooine Electronic Systems site, Esch confirmed.

Fuel to the fire

A fire burned at the facility a year ago, but the severity of the damage is unclear. Local news outlets reported there was one person living on the abandoned property in an RV, and that he accidentally caused a structure fire.

According to WDEQ, the fire did not burn the e-scrap significantly. Esch said WDEQ was notified by local fire authorities that the facility had caught fire, but noted the incident did not trigger any additional cleanup.

Zak-Armistead, the neighbor, has a different account. She recalls four camper vehicles moving onto the property after it was abandoned, with at at least six individuals living on the site.

She said the building is still full of material, and that the material inside was burned in the fire as well. But she’s particularly concerned about the outdoor stockpile and the hazardous substances it could be releasing.

“Every time it rains that’s leaking into the ground,” Zak-Armistead said, noting that local residents’ wells are only 120 feet deep. “I don’t know how long it will take for that to leak into our wells.”

Below is a slideshow of photos of the stockpile site. Hover over the image to see arrows that will allow you to advance through the photo set. 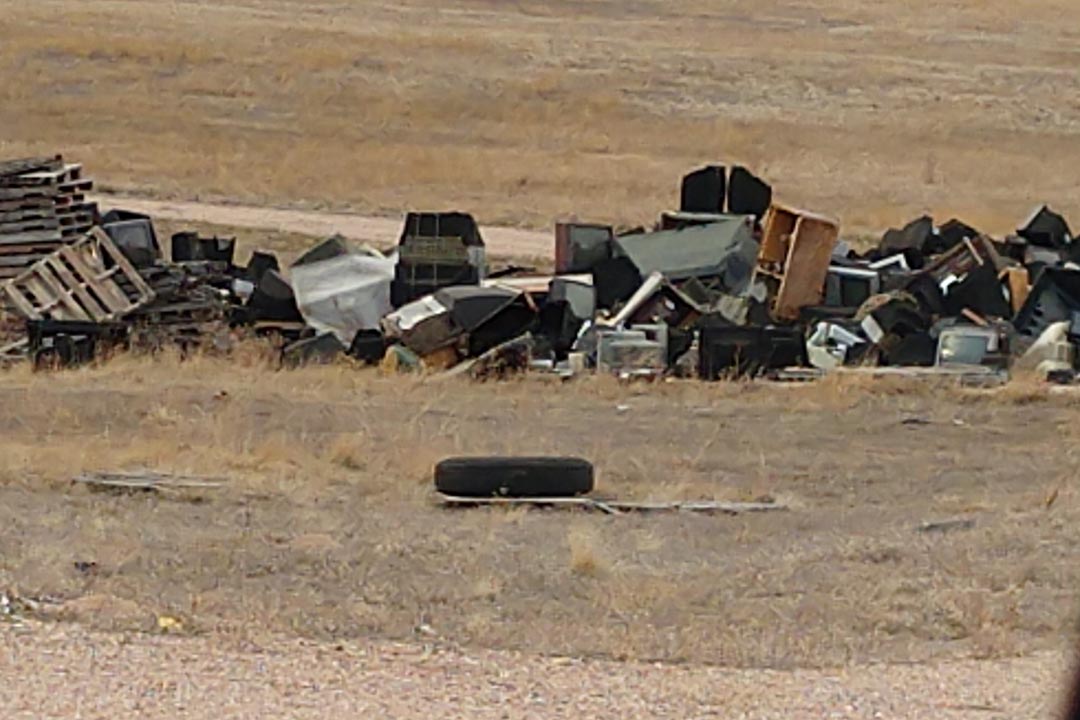 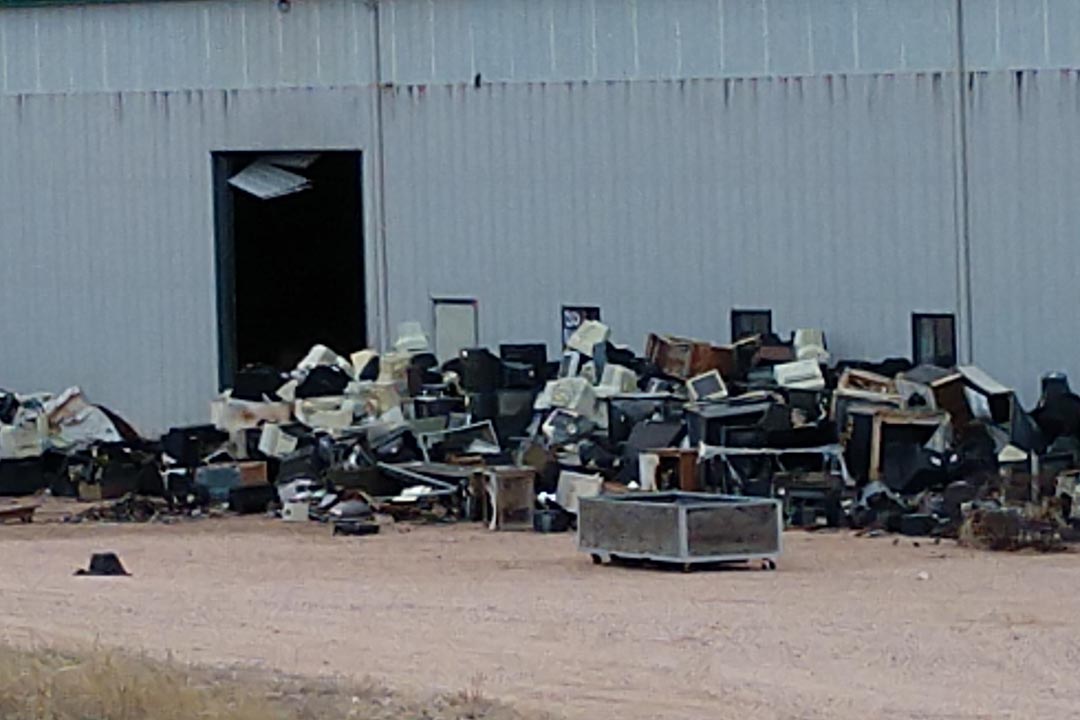 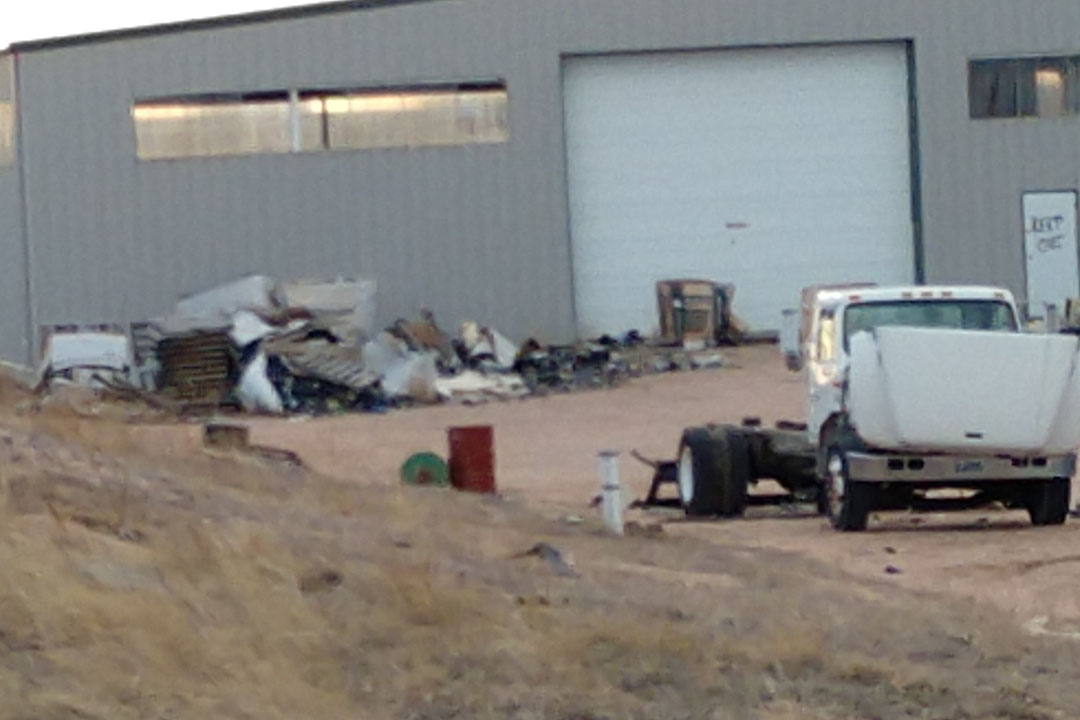 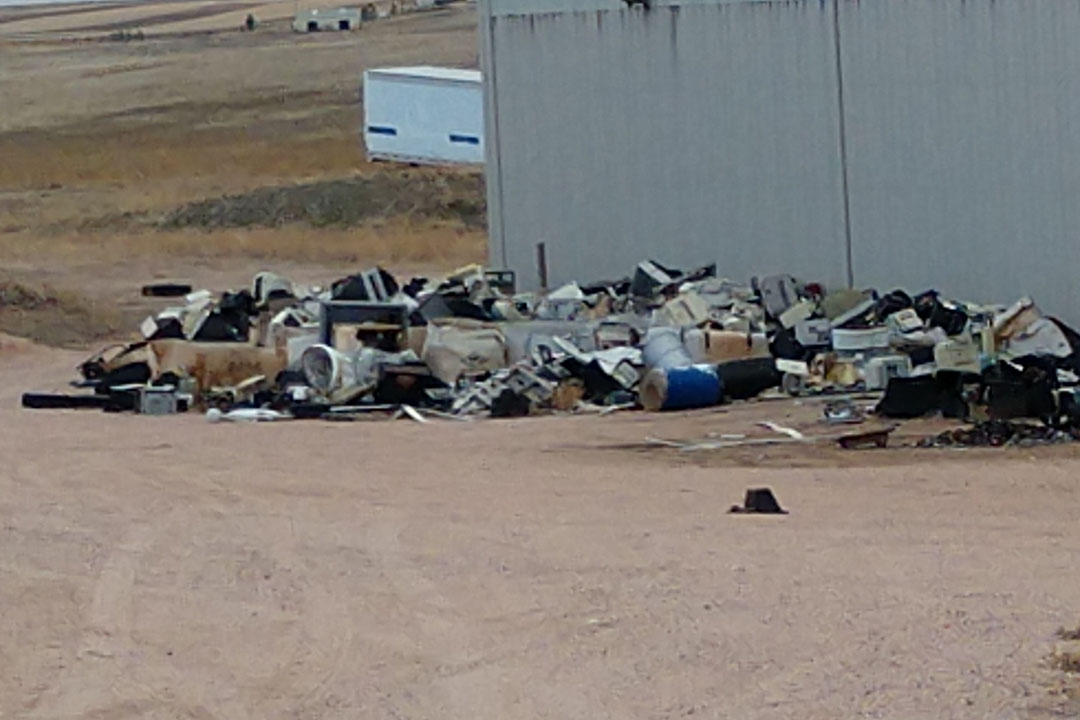 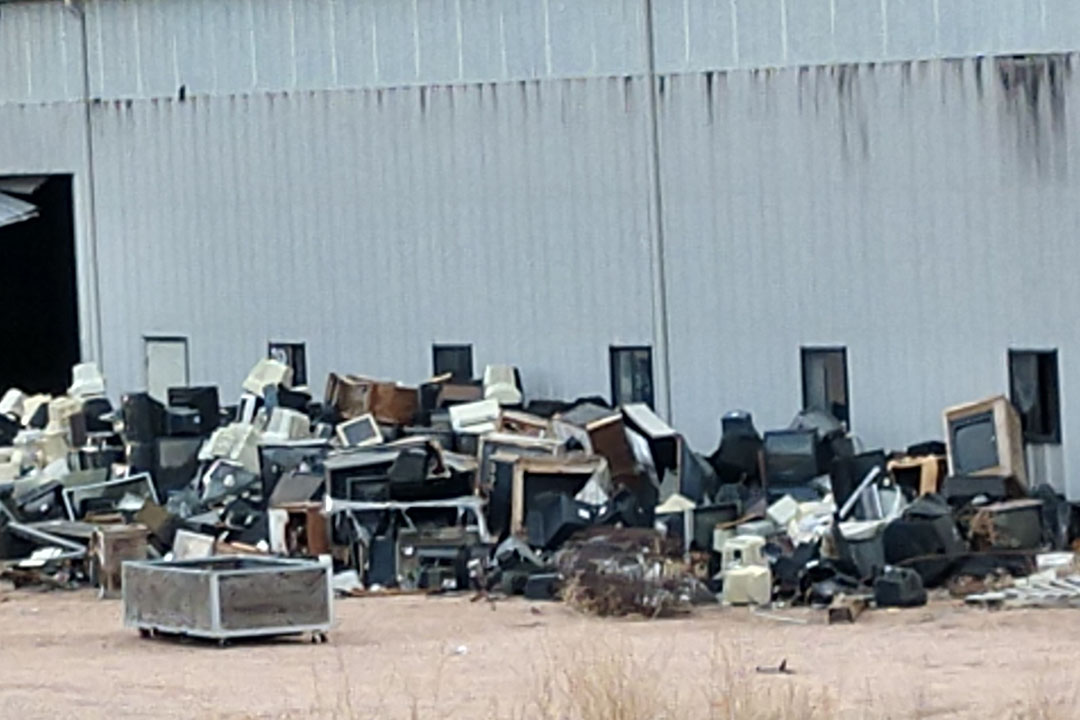 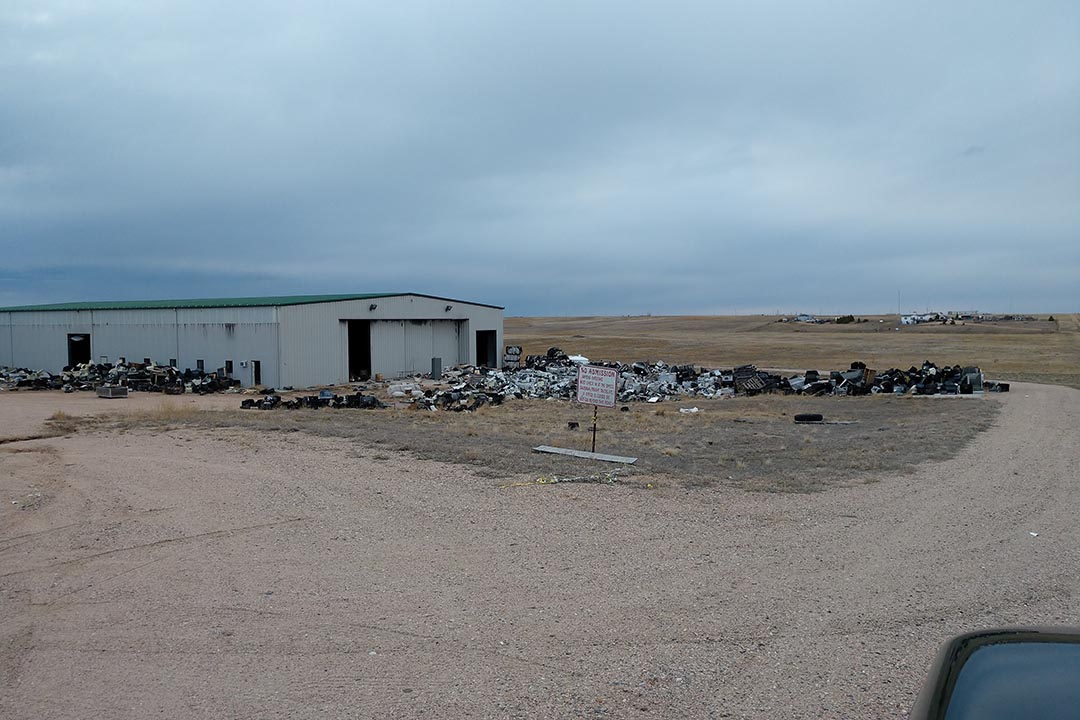 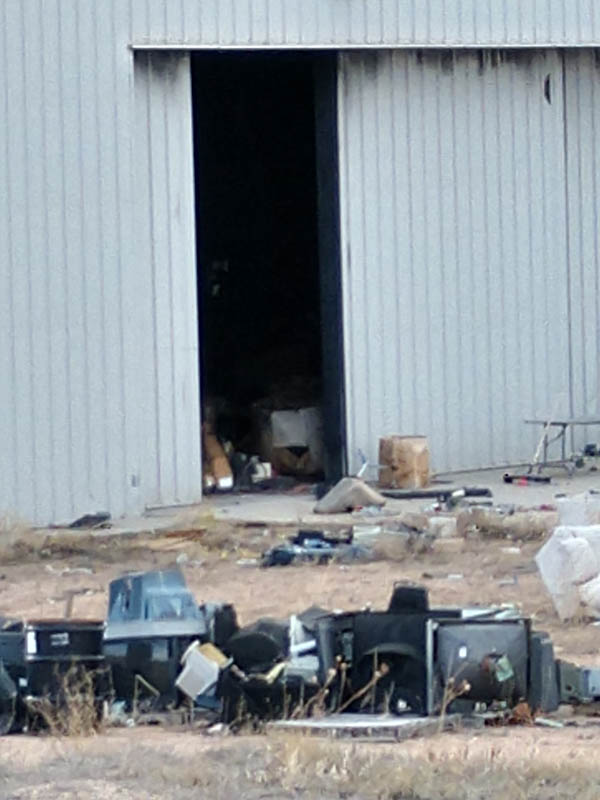 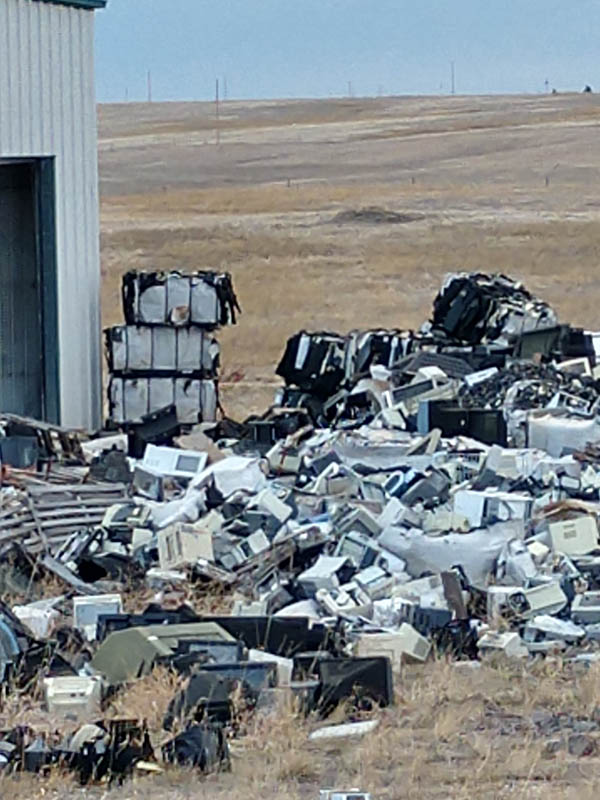 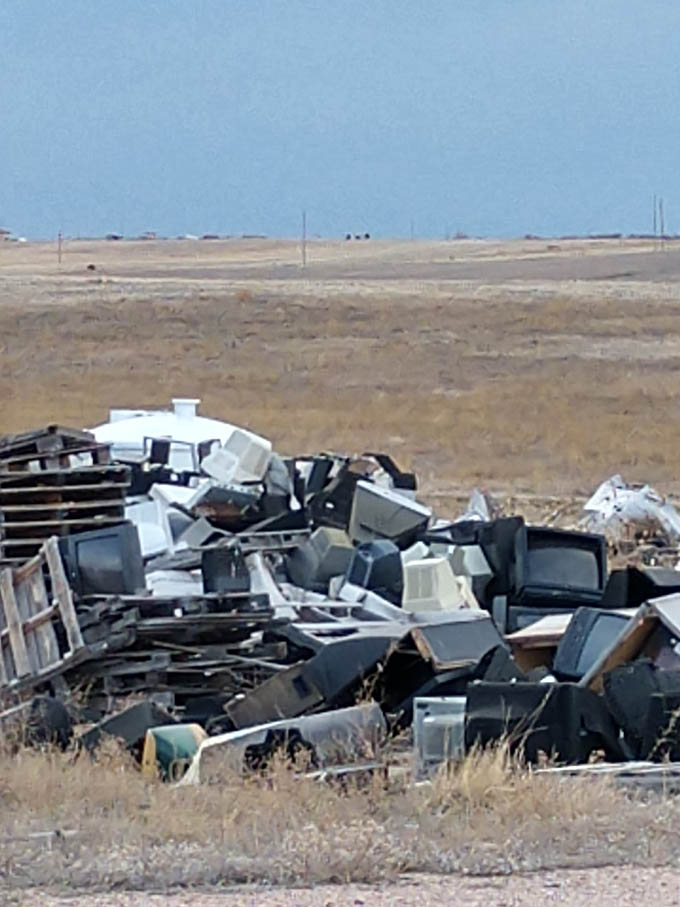 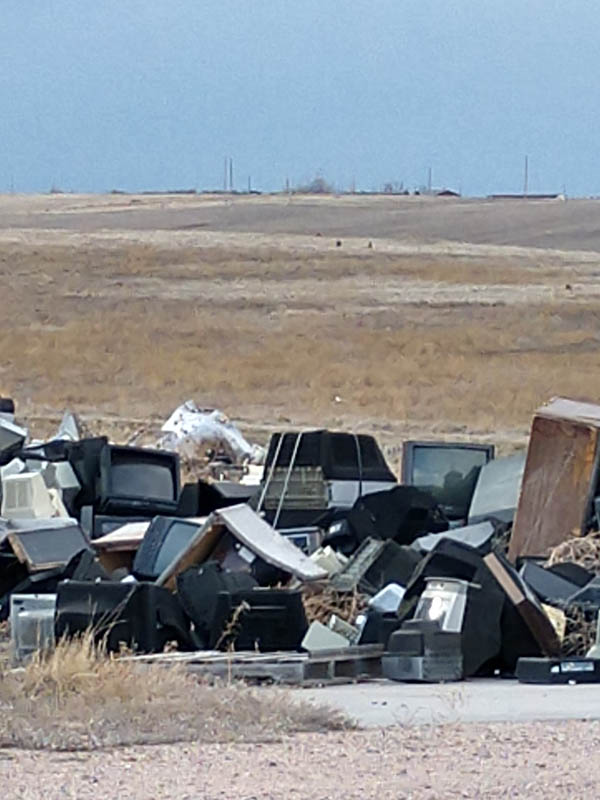 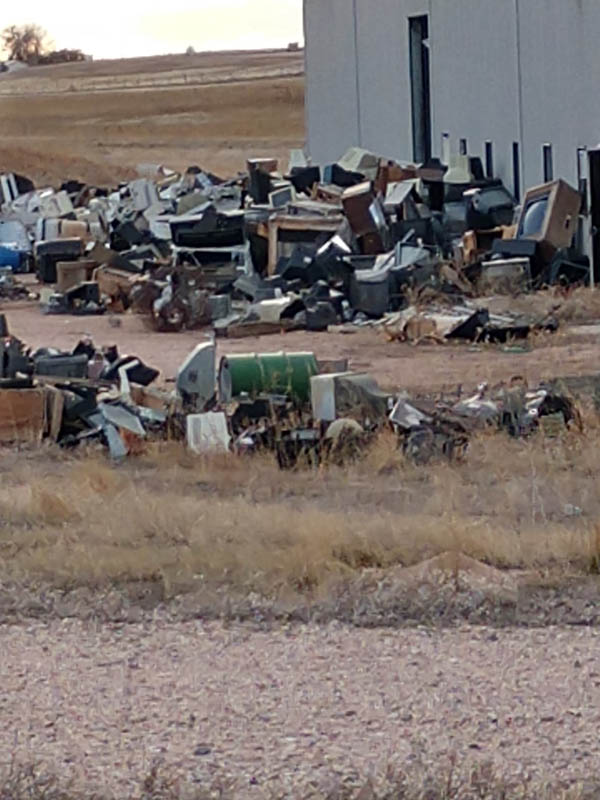 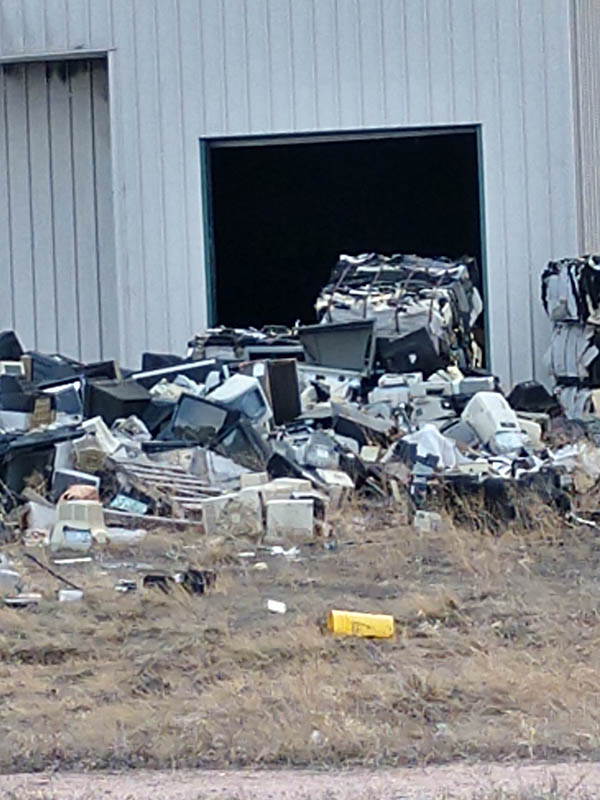 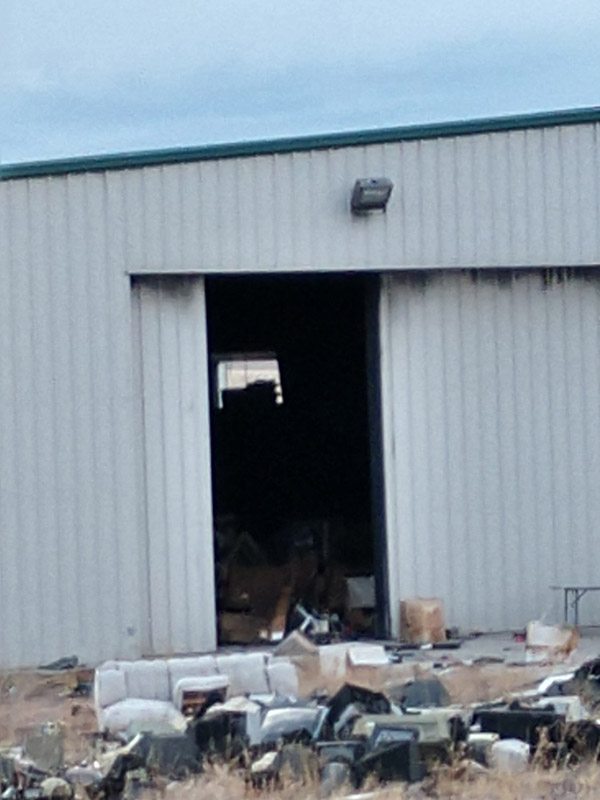 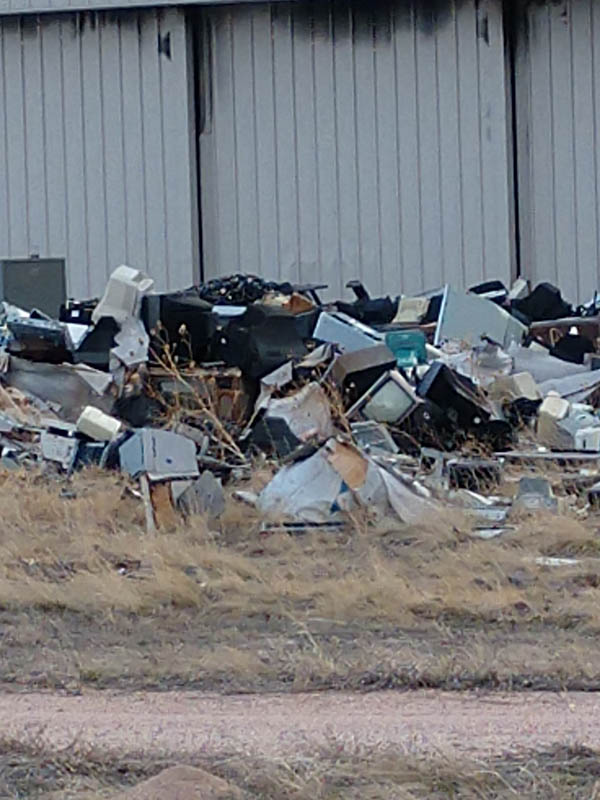