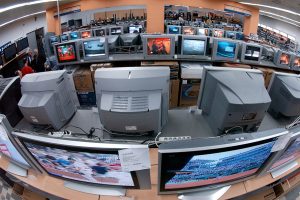 An appeals court has ruled against Vizio in a case over how Connecticut’s state program calculates the recycling fee it charges manufacturers.

Vizio filed suit against the Connecticut Department of Energy and Environmental Protection in 2015, taking issue with the Constitution State’s allocation of funding responsibility. After a couple years of back-and-forth dismissals and appeals, the U.S. Court of Appeals for the Second Circuit issued the latest decision on March 29.

The court found that Vizio, a manufacturer of electronic devices, “failed to convince us that its claim should proceed under a variety of theories, old and new.”

But Vizio disputed the method by which the state calculates that fee. Connecticut, like many states with e-scrap programs, uses national market share data to calculate fees for manufacturers.

According to the court decision, Vizio claimed Connecticut’s national market share approach “unduly regulates interstate commerce” by levying in‐state fees based on out‐of‐state sales. Vizio also posited OEMs are being double-charged on the out-of-state sales, since the company pays recycling fees to operate in other states as well.

The case has worked its way up the legal ladder. It was first argued in district court in 2015 and subsequently dismissed. Vizio re-filed with changes in 2016, but it was dismissed again at the end of the year. The company appealed to the U.S. Court of Appeals in 2017.

Last week, the court affirmed the initial legal ruling, dismissing the case once again. The judges focused primarily on Vizio’s claim on appeal that the e-scrap fee calculation violates the Commerce Clause, an article of the U.S. Constitution that has been interpreted to prohibit states from “unjustifiably” discriminating against interstate commerce.

The judges disagreed that the e-scrap program actually controls a company’s out-of-state activity, but rather “merely considers” that activity when imposing the recycling fee.

They also pointed to a previous legal decision stating that protectionist measures differ from those that are “directed to legitimate local concerns, with effects upon interstate commerce that are only incidental.” To determine which category a law falls into, its public benefits must be weighed against its burden, the judges wrote, and they offered an opinion on the public value ot the e-scrap program.

“The benefits provided by Connecticut’s E‐Waste Law are legion,” the judges wrote. “Primarily, the law funds the state’s recycling efforts, a clear benefit to the public at large. Secondarily, the market share approach itself provides additional benefits in that it, among other things: apportions costs amongst state market participants, reduces the administrative strain other approaches may carry in identifying producers, and guarantees that any ‘orphan’ products – those for which an original manufacturer is unidentifiable – will be recycled.”