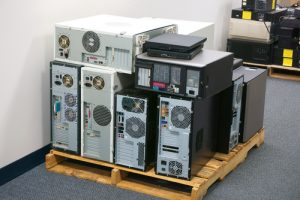 Cascade Asset Management has released its latest annual report based on the company’s ITAD operations, and it presents positive trends over the past year and an optimistic forecast for the future.

The number of assets Madison, Wis.-headquartered Cascade sold last year grew by more than 18 percent, company CEO Neil Peters-Michaud said. Meanwhile, the average cost to the customer – fees paid to Cascade minus the money Cascade pays its clients through a revenue-sharing agreement – decreased by 34.2 percent.

“We’re doing more and getting more money back to our clients,” Peters-Michaud said. “That’s good for everybody, and creates a more sustainable enterprise where we can offset as many fees as possible by the revenue generated for the resold items.”

The report, which Cascade compiles each year, is based largely on two information sources: the company’s evaluation of 259,000 assets processed for reuse and recycling during 2017, and a November 2017 survey of clients asking about their IT asset management practices and expectations for future spending. It was released this morning, and Cascade plans to discuss the findings in a Feb. 20 webinar.

In an interview with E-Scrap News, Peters-Michaud expanded on the factors behind the trends revealed in the report and the forecast for the ITAD sector in the coming year.

Clients are refreshing their equipment slightly faster than in prior years, which means the devices retain higher value when Cascade markets them for resale. These factors contributed to a 7.3 percent increase in the average laptop resale price, up to $83.59 per unit, and a 13.4 percent increase in the average desktop PC resale price, which hit $44.83.

Part of the increasing value is due to improving quality of the equipment Cascade receives. And some is due to the company working with clients over time and communicating the importance of moving retired assets to the resale company while they still retain value. It’s also due to OEM design decisions, Peters-Michaud said: Cascade deals mostly with Dell, HP and Lenovo devices, and they’re getting more repairable.

But despite the positive computer values, resale values dropped 21 percent for smartphones, which Cascade attributes to enterprise generators’ IT asset management practices. As the sector evolves, the company predicts more value will be unlocked in those devices, he said.

“It’s still kind of a new thing for enterprises to figure out how to include them in their IT asset management programs and regular refreshes,” he said. “They don’t manage them on constant refreshes like desktops and laptops and other enterprise gear.”

Capturing the most value from mobile devices will be particularly important in the coming years.  Although purchases of PCs and laptops is fairly consistent, there’s been an increase in mobile device purchases by enterprises.

Peters-Michaud said the continuing increase in average resale value has been a surprise. Although pricing for individual models can go up and down year to year, the overall product stream value continues to rise.

Given a consistent refresh cycle, one could reasonably expect the average resale price to decrease year over year due to reductions in pricing of new equipment and an increasing volume on the market.

“That’s just not what we’re seeing, so I think it gives some positive outlook to the reuse sector,” Peters-Michaud said. “It’s a stable and potentially growing market, both on the average value generated per asset, as well as the size of the market.”

The report points to a positive outlook for the ITAD sector in the coming year. That’s in contrast to what Peters-Michaud described as some concerns in the industry that the ITAD sector will diminish because less equipment is being sold onto the market.

“From the number of IT assets that are in circulation in businesses, that doesn’t seem to be diminishing in any way,” Peters-Michaud said. “So I still see a robust opportunity for people to work with enterprises to capture that equipment.”

“I think overall more people are feeling confident to keep going with their investments, or increasing, so that’s good news for our industry,” Peters-Michaud said.

By the end of 2018, Windows 7 will no longer be supported, which will likely push a number of enterprise clients to refresh and upgrade to Windows 10.