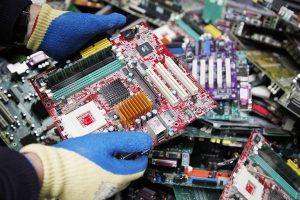 If electronics recycling is akin to mining, a recently released data tool provides a sort of geological map for e-scrap companies to follow.

Partners in the European Union-funded ProSUM (Prospecting Secondary Raw Materials in the Urban Mine and Mining Wastes) project on Jan. 17 released their final report and online data tool. The tool provides a wealth of information on the materials that make up scrap electronics and electrical appliances, vehicles, and batteries generated in Europe.

ProSUM project leader Sarah Downes spoke about the initiative during E-Scrap 2017, held in Orlando in September. Downes told E-Scrap News the information will help processors plan for the recovery of valuable elements in products.

The Urban Mine Platform, as the online tool is called, shows the composition of devices put on the market, in use/storage and discarded each year. It breaks the data down by types of electronics and even includes estimates of the weight of different materials, some currently recoverable and some not, used in them.

Following are a few examples to illustrate the kind of information that’s available: The total weight of gold in all types of end-of-life electronics and electrical appliances has generally increased over the past decade and a half and is expected to continue growing slightly. The same is generally true for copper. For silver and palladium, however, the metals’ weights in the end-of-life stream have leveled off and are expected to be flat in the future. For platinum, the total weight is falling and is expected to continue decreasing in the waste stream.

Project partners relied on more than 800 source documents and databases to create the consolidated database, according to a press release. The 3.7 million euro (about $4.4 million) ProSUM project is led by the Brussels-based WEEE Forum, an association of 33 extended producer responsibility compliance organizations, most of which are located in Europe. More than 80 percent of the project budget came from a grant from the European Commission.