Processors lay out strategies for a shifting stream 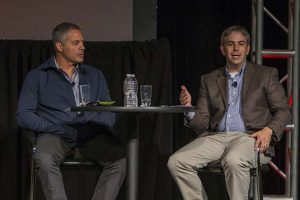 As commodity prices fluctuate and reuse options proliferate, many e-scrap operators regularly confront a key question: shred or refurb? A panel at last year’s E-Scrap 2017 in Orlando discussed the multitude of profitability factors that go into answering that question.

Levine was joined on stage by Neil Peters-Michaud, CEO of Cascade Asset Management, and Kevin Dillon, co-founder, chief marketing officer and chief sales officer at ERI. The session was moderated by Caitlin Sanchez, an attorney for Vizio.

Their conversation about considerations for maximizing revenue touched on a range of industry issues, including the evolving consumer electronics stream, the details of exports and the good and bad of certification standards.

Industry and stream evolve in tandem

The changing electronics stream – notably the lightweighting and shrinking of devices – is forcing companies to think more deeply about whether to employ traditional shredding or reuse and refurbishment.

“The devices are smaller and smaller, so there’s less and less commodity value associated with [them],” explained Dillon of ERI, noting his company evaluates every asset it receives to determine whether there is some resale value.

But miniaturization poses problems on the reuse side too. As shifts take place, technicians have to learn new disassembly techniques and figure out how to handle devices with new and unfamiliar components

“The small devices are a real challenge,” acknowledged Peters-Michaud of Cascade Asset Management.

That fact explains why many companies are looking to deal mainly with the large enterprise generators rather than the consumer stream.

“If you want to handle a lot of random products at random times and variable volumes, then you handle the consumer side,” Dillon said.

But despite headaches caused by shifts in the stream, the material makeup is also opening up opportunities. By finding a good balance between reuse and commodities recovery, companies essentially diversify their revenue streams.

Commodities are volatile, Levine said and nothing will change that element of the recycling industry. Some predictability can be built into a company’s balance sheet with an established refurbishment operation. Though devices tend to lose value as they get older, the stream is always producing something new that will still have worth for resale.

“So on the one side of the table you have commodities that are up and down,” Levine noted, “and then on the other side when you’re making reuse decisions [values are] always going down … but then there’s something coming in to replace that.”

Overseas markets are another critical factor when determining how material will be handled. And on that front, China is being watched closely. The Asian giant has made waves of late with an import ban on some recyclables and stricter limits on the details of materials it’s still allowing in. 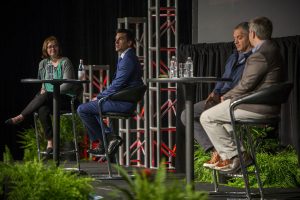 The processing leaders on stage said there are silver linings in the market turbulence. Chinese organizations want to work with companies that will supply them with clean commodities, Dillon said. And Levine added the restrictions on imports could force exporters of dirty or contaminated material to clean up their act, leveling the playing field.

“We spend a lot of time, money, effort to create clean commodities, and then you’re just lumped in with everything else, where maybe people aren’t paying attention and taking the right steps to make a clean commodity,” Levine said. “It sort of ruins the party for everybody.”

Cascade takes some precautions to ensure the equipment it sells does not get mismanaged when sent out of the country. The company seeks assurances from the buyer that the company is buying equipment for the devices’ original purpose, rather than to part it out.

“That gives us a better assurance that it’s got at least another good life out there, but then it’s really hard to control what happens to it afterwards,” Peters-Michaud said.

Collection infrastructure has to develop on its own in other countries, he added.

“Just like a manufacturer doesn’t have control after the first person buys the computer … it’s hard for us to have total control on what the next person’s going to do to dispose of that computer,” Peters-Michaud said. “But if we can do as much as we can to educate them about the use of that product and how to treat it properly at the end of its life, hopefully they’ll make some good decisions.”

One to rule them all

A discussion about changes in the e-scrap sector couldn’t be complete without mention of the certification standards that have become core components of the industry over the years. The three speakers praised the e-Stewards and R2 standards for cleaning up the industry and removing the “bad actors.” They did, however, offer some critiques, noting cost concerns in particular.

“All of us can’t go broke on certifications,” Dillon said.

He noted many of ERI’s large customers have certain requirements and audits for their recycling contractors. And he said that very customer has a different level of comfort with certifications.

Dillon proposed that the large certifications form a national or global certification. He also expressed that certifications should move into a “second phase,” which would differentiate between company type in certifications. A processor certified to the e-Stewards standard would have different requirements than a collector, smelter or reuse/refurbishment operation.

By treating all sectors similarly, the current system equates dissimilar recycling companies, Dillon said: A small collector looks the same on paper as a multi-facility processor leveraging expensive processing facilities. Customers who can’t visit their recycling vendor may not get the distinction between operations.

Peters-Michaud said a global standard could take an approach similar to that of the National Association for Information Destruction (NAID).

“There’s kind of a minimum expectation for security that employees need to have, facilities need to have, but then you can get certified for different types of security equipment that you’re handling,” he said. “I think there’s a lot of credibility to that idea.”