The story of the R2 standard’s evolution 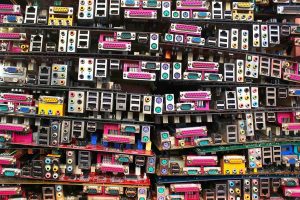 Nearly 720 facilities worldwide are now certified to R2. As the electronics recycling standard approaches its 10-year birthday, E-Scrap News takes a look at the factors that have shaped the standard’s growth of late.

After several years of significant gains in the number of large North American e-scrap companies joining the R2 network, more recently the standard has seen slower adoption upticks overall, with much of the activity happening in the mobile phone sector as well as in international markets. Meanwhile, R2 is undergoing an update that’s expected to further integrate the standard into the operations of electronics recycling facilities.

R2 is one of two electronics recycling-focused standards originating in North America. The other, e-Stewards, was founded by the nonprofit group Basel Action Network.

A database maintained by E-Scrap News shows that certified facilities now handle the majority of scrap electronics that are recycled by for-profit processors in the U.S. Many of them are R2 certified, with a number of others possessing both R2 and e-Stewards certifications or only e-Stewards certification. Today’s uncertified locations tend to be smaller and located away from population centers.

“While we recognize there is still more work ahead to achieve our goal of access to safe repair and recycling worldwide, we are proud of our progress to date, proud of our latest milestone, and proud of our R2 certified partners who are improving how the world reuses and recycles electronics,” SERI wrote in September.

Data released by SERI shows a slowing of growth in 2014 and 2015, a result of the release of the R2:2013 standard update,  Osterberg said. With its publication in summer 2013 came an 18-month transition period. Some companies weren’t able to meet the new requirements, she said.

Today, more than 85 percent of the R2-certified facilities are in the U.S. and Canada. Has R2 reached a saturation point in that market?

“We are still seeing growth in North America, but it has certainly slowed,” Osterberg said. The U.S. has about 569 R2-certified facilities in good standing as of this month, up from 523 in January. Canada now has 44, up from 27.

That being said, the makeup of recent joiners seems to be shifting. When she looks through applications, Osterberg still sees a variety of different e-scrap industry players represented. But, in the U.S., cellphone refurbishers seems to be making up a larger component of growth. That’s been the case for the past couple of years, she said.

John Lingelbach, executive director of SERI, said R2 isn’t seeing a lot of new, established e-scrap recycling companies join, but it is welcoming a number of small operations – some of them very small – and small brokers. The exception is the arrival of some large, established cellphone refurbishing operations, including one company boasting 10,000 employees, he said.

SERI is funded via annual fees paid by certified facilities: $1,500 for for-profit businesses and $1,000 for nonprofit ones, with a cap in total annual charges for organizations with a large number of facilities.

Phone refurbishers’ increased interest in R2 appears to be driven by many cellular carriers requiring that downstream processors handling their trade-in devices be certified, Lingelbach said. The processors themselves sometimes don’t do much beyond testing for functionality and replacing scratched screens, he said.

In Canada, Osterberg said, growth in R2 certification seems to be driven by requirements from Electronic Products Recycling Association (EPRA), the stewardship group managing e-scrap collection and recycling programs for all provinces except Alberta. If processors want to handle material collected through the extended producer responsibility (EPR) programs, they have to become certified, she said.

“That’s really what’s driving the certification growth in Canada at the moment,” she said.

Outside of North America, facilities in Asia, Europe, Oceania, the Middle East and South America have attained R2 certification. To a large degree, EPEAT has been a driver for R2 certification internationally, Lingelbach said. 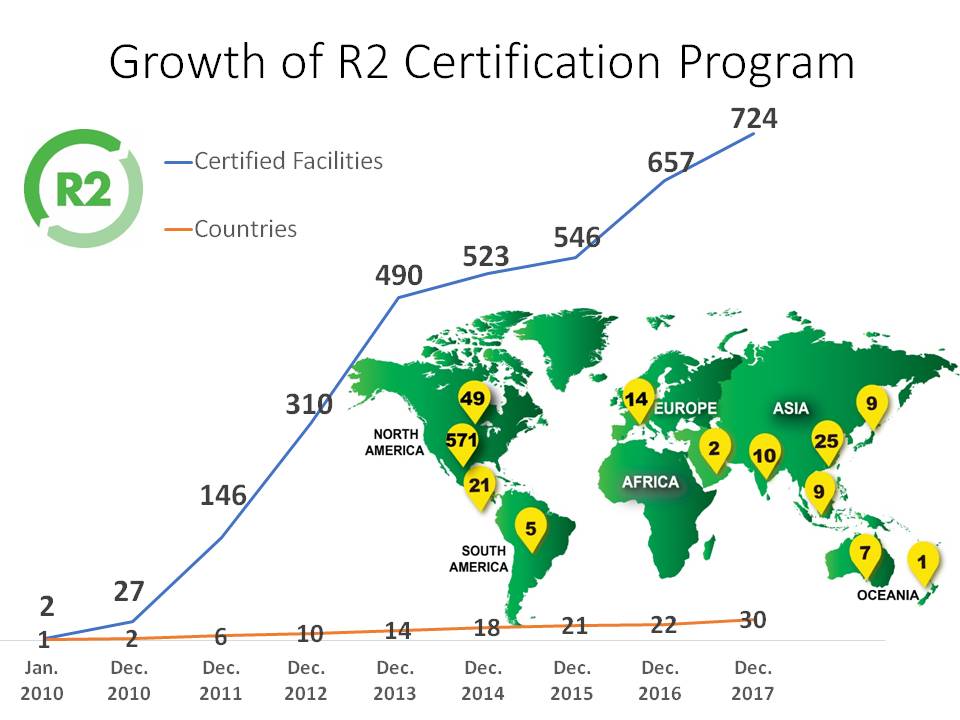 One of the challenges of growing R2 overseas has been the conundrum of what comes first: the facilities or auditors. Overseas facilities may be told they need to become R2 certified, but they balk at having to fly in inspectors from the U.S. “We’re getting some pressure to get auditors on all the continents and even in particular countries,” Lingelbach said. “It’s sort of a Catch-22. They sort of have to grow together, the companies and the auditors,” Lingelbach said. “But it’s very hard to orchestrate that.”

Looking toward the future

A committee staffed by SERI, called the Technical Advisory Committee (TAC), is currently working on what would be the second full-scale overhaul of the R2 standard. A final version of the update is expected to be published next year, with full implementation by 2020. The first overhaul was R2:2013.

The TAC has considered updates to key provisions, including requirements around tracking materials and verifying that downstream vendors can properly handle devices containing “focus materials,” including hazardous substances. Among other changes under discussion are the addition of requirements imposing time limits for processing equipment and shipping materials.

Once consensus is reached on proposed changes, SERI will release a full draft of the revised standard for public comment, according to an R2 revision project update.

Lingelbach said that in recent years SERI has shifted its role from just that of a standard developer looking at facilities’ management systems to an organization that is also providing oversight regarding a facility’s performance and activities. It implemented a training program teaching auditors how to better spot material shipments prohibited by R2, for example. SERI also began conducting spot audits.

Today, SERI’s conformity assessment piece is larger than its standards development piece, Lingelbach said. At the same time, the nonprofit group isn’t really sure yet how to get the resources needed to do the outcome checks that are needed. For example, Lingelbach noted just how resource intensive spot audits are, and that the auditors’ travel expenses pale in comparison to the work that’s needed later if SERI finds itself in a dispute with a facility.

Osterberg said that earlier this year SERI opened its auditor training to recycling company staff, as well, better preparing them to meet R2 requirement. One such event was held at the Electronics Reuse Conference this fall in New Orleans, where SERI provided a two-day internal auditor class.

“I think one of the reasons also for our growth is because we do really try to reach out to the recyclers and provide them with many training opportunities,” she said, “so that they really understand what those best practices are and they’re better able to implement them.” 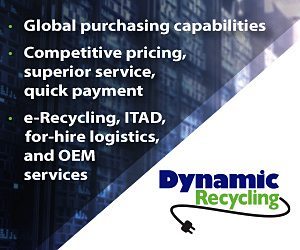