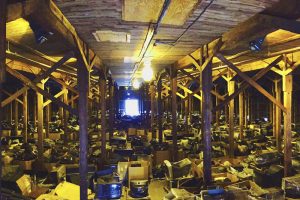 CRTs stockpiled in a eWaste Tech warehouse in Richmond, Va.

A property owner and public waste authority are at odds over a CRT stockpile in Richmond, Va. Meanwhile, the U.S. EPA has been asked to get involved.

In an email sent out last week to various government officials, Fountainhead Properties asserted that Richmond-based eWaste Tech had abandoned 285,000 pounds of intact CRT devices at one of Fountainhead’s warehouses in the city.

The email also claimed that the Central Virginia Waste Management Authority (CVWMA), which contracted with eWaste Tech to handle material from local collection events, should be responsible for cleaning it up.

John Gregory, Fountainhead’s vice president of development, said he expects the clean-up to cost about $100,000 and that CVWMA is liable for the removal of the warehoused material under the Resource Conservation and Recovery Act (RCRA).

“It’s their responsibility to see this through,” he said. “RCRA was created to avoid situations like this, where someone can just contract away their liability … . You can’t just go hire Joe Shmoe on the street and wash your hands of it. And that’s what they’re trying to do.”

Kim Hynes, the executive director of CVWMA, confirmed that her group is trying to assist eWaste Tech in removing the material but maintained that the processor is ultimately the entity on the hook for moving the glass.

“We don’t believe we’re legally responsible for cleaning up the material that is in his warehouse,” Hynes told E-Scrap News. “We have already paid for it to be recycled once.”

The CVWMA terminated its contract with eWaste Tech in April over glass-management concerns. Hynes noted that eWaste Tech has informed CVWMA it is working to obtain additional capital to finance a cleanup.

Gregory of Fountainhead said his company leased the warehouse space to eWaste Tech in April 2016 as part of an economic revitalization project the firm is spearheading in Richmond. The original lease was set to last just three months as eWaste Tech completed a move to a larger operation elsewhere in Richmond, but no such move occurred and a sizable volume of CRTs began to accumulate on the premises.

To date, Gregory said, Fountainhead hasn’t received any payment from eWaste Tech and doesn’t expect the company to be able to clean out the warehouse. “There’s absolutely no way he’s still operating,” Gregory said.

But the processor says Fountainhead’s version of events isn’t accurate.

Felipe Wright, the owner of eWaste Tech, told E-Scrap News the company is not closed and is actively working with CVWMA to arrive at a solution.

“No one is trying to run away from the problem,” Wright said. “We’re trying to address it.”

According to Wright, the company’s challenges are related to raising sufficient capital to get the material moved downstream. “Once we have the money taken care of, we have identified a downstream to rectify this problem,” Wright said, declining to disclose the downstream outlet.

In May, E-Scrap News reported that eWaste Tech’s accumulated glass was closely tied to the closure of Closed Loop Refining and Recovery, a CRT glass operation that had operations in Columbus, Ohio and Phoenix.

Bringing in the EPA

Fountainhead’s Aug. 7 email was addressed to Dan Gallo at the U.S. EPA’s Mid-Atlantic Region III office. It said the company was reaching out to the EPA for assistance at the suggestion of the Virginia Department of Environmental Quality.

An EPA Region III spokesman told E-Scrap News that the EPA just became aware of the situation and it would be premature to comment at this time.

This isn’t the first time a landlord and public agency have been in a dispute of this kind. A property owner last fall sued 11 solid waste agencies in South Carolina after Creative Recycling Systems abandoned CRT material in a warehouse. The agencies had contracts to send scrap electronics to Creative.