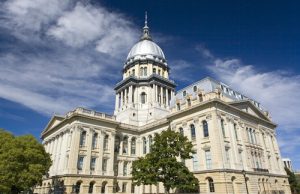 Major changes to the Illinois electronics recycling program have been proposed, including a requirement that manufacturers fund the recycling of all covered devices that enter the system.

Introduced in February, Senate Bill 1417 received multiple substantial amendments last week and now completely overhauls the extended producer responsibility (EPR) program for electronics. Under the system established by the bill, a “manufacturer clearinghouse” acts as a stewardship organization funding transportation and recycling of all covered electronics that are collected. Manufacturers would also have the option to meet the requirements independent of the stewardship group.

The legislation has support from a broad range of interests, including environmental groups, recycling stakeholders and OEM representatives.

Because of lightweighting of new products, Illinois’ weight-based manufacturer recycling targets have not kept up with actual recycling demand. That has led to manufacturers achieving their weight collection goals halfway into the year, at which point they stop funding e-scrap transporters and processors, who, in turn, stop accepting material from collection centers.

Lawmakers in 2015 passed a bill temporarily abandoning a formula using device weights to calculate targets. Instead, the legislation set collection and recycling targets in statute for a few years: 46.6 million pounds in 2015 and 49.6 million pounds in each of 2016 and 2017. Those statutorily imposed weight targets sunset at the end of this year, meaning if no changes are made, the goal is projected to drop to about 30 million pounds for the 2018 program year, said Jerry Peck, director of government affairs for Illinois Manufacturers Association (IMA).

The bill is awaiting a floor vote in the Senate, and it must still go through the House of Representatives. A May 31 deadline for final voting on the bill in both chambers has been established.

The IMA is supporting the changes, even if the cost to manufacturers increases over the next several years compared with what it would be under the weight-based formula.

“It’s probably going to cost manufacturers significant money in the first couple years, millions and millions more” than what they would be paying if the state program reverted back to the original weight-based formula, Peck said. But he said it will actually be a cost reduction from their current obligation under the statutorily set goals. Peck said he thinks the manufacturers will ultimately be collecting more materials more efficiently, for a cheaper cost, making it “beneficial for all sides.”

Still, Peck said the bill is a work in progress. The legislation initially proposed decreasing the number of categories of covered devices from 17 to five. The current version of the bill retains the 17 categories, despite manufacturers’ objections.

“This isn’t a perfect solution, we realize that, this is baby steps going forward,” Peck said. “There’s a couple good things in here that kind of move the ball forward, but we certainly don’t address a lot of the serious problems in e-waste collection.”

Although the Illinois Recycling Association (IRA) was not in favor of the bill as originally proposed, after lots of negotiation and with the new amendments, its view has changed, said Adam Jaquet, chairman of IRA’s legislation committee.

“It’s not perfect,” he said. “Obviously we didn’t get everything we wanted as recyclers and as collectors, but we think it should work.”

State records show the Consumer Technology Association (CTA), which weighs in on e-scrap program legislation around the country, spent a small amount of money lobbying several senators involved with the bill in early May. CTA couldn’t be reached by E-Scrap News for comment by press time.

For collectors, Jaquet said the biggest effect of the bill would be the security of knowing they will be able to move electronics out of their facilities to a recycling company. In the past, collectors have gotten stuck with truckloads of material with no available downstream when weight-based goals were met early in the year and funding from manufacturers ended.

“That’s a nice protection from a collector standpoint, that we know that on Jan. 1 we have a place to go with our electronics, and on Dec. 31 we’re still going to have a place,” said Jaquet, who is also vice president of Eagle Enterprises Recycling.

It helps processors as well, he said, because they can expect a smooth flow of material coming in for processing year-round.

The bill stipulates that electronics manufacturers are responsible for funding transportation and recycling, not collection. Manufacturer-funded collection was one point the recycling association pushed for but did not get into the bill, Jaquet said.

“We’re disappointed we didn’t get the collection funded and get to have a true, full EPR program, but at least we’re not having to pay for trucking,” he said, adding that transportation costs have discouraged rural counties from participating in the program.

Under the bill, county collection centers are allowed to charge fees to customers dropping off electronics.

Illinois could see more county collection centers under the revised law, as full manufacturer funding year-round could make starting a collection center more attractive. Counties have the option to “opt in” and join the e-scrap program. Under the bill, if they do, they have to provide a certain number of collection sites based on their population densities, often called a convenience standard.

More county collection centers could be good news for rural residents, who Jaquet said are getting stuck in a bind with no nearby collection sites.

“They couldn’t put the stuff in a landfill, their garbage haulers wouldn’t pick it up, and they had nowhere to go with it,” he said.