How lightweighting has shaken up the electronics stream 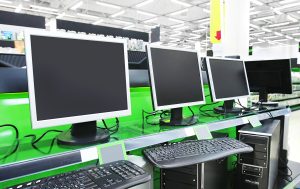 A recently released study quantifies the massive shift in device composition over the past 25 years. Researchers tackled the task with an eye toward predicting where materials usage is headed in the future.

The analysis provides an in-depth look at the rise of lightweighting in consumer technology, noting that the total weight of consumer electronics sold annually in the U.S. peaked around the year 2000 and has since declined to 1993 levels, despite hundreds of millions more units currently being sold each year.

The study also identifies which materials have grown and diminished within consumer electronics. Researchers dismantled nearly 150 products to gauge their composition. That information was coupled with a creative method of looking at the electronics market in the same way scientists study biological ecosystems.

“If we want to think about complex systems, where better to turn than nature itself?” said Callie Babbitt, lead researcher on the study, in a webinar last week describing the research results.

The analysis came out of a partnership between the Rochester Institute of Technology’s Golisano Institute for Sustainability, the Consumer Technology Association (CTA) and the Staples Sustainable Innovation Lab.

Quantifying material makeup is important for the e-scrap industry, as it has safety, environmental and commodities marketing implications. Hazardous materials have decreased in products, the study shows, but so have the valuable metals. It’s a trend experts predict will continue.

Looking into the future, the materials inside products “get to be a little bit more boring,” said Walter Alcorn, vice president of environmental affairs at CTA. “Maybe they don’t have the toxicity issues that the older legacy products do, but they also don’t really have the precious metals, they don’t have the things that are exciting economically.”

Researchers determined the volume and types of products coming into households each year; quantified the stock of products accumulated in households and studied the amount discarded each year. Using that information, researchers laid out material and mass flows over time. Researchers looked at the period from 1990 through 2015.

A variety of sources were used for product flows, including CTA reports and sales and shipment data from the International Data Corporation (IDC).

Although product consumption grew over the 25-year period, the materials footprint began to slow toward the latter years. That was driven by technological innovation, such as CRTs being replaced by flat-panel devices.

After looking at the number of units sold over the years – a constantly increasing line – the researchers broke the electronics stream down by weight for each type of product.

The sales-by-weight graph produced by that exercise (shown below) has more fluctuations, particularly around 2005, as CRT TVs began their exit from the market and the lighter-weight LCDs began to rise, only to be replaced by LED TVs just a few years later. 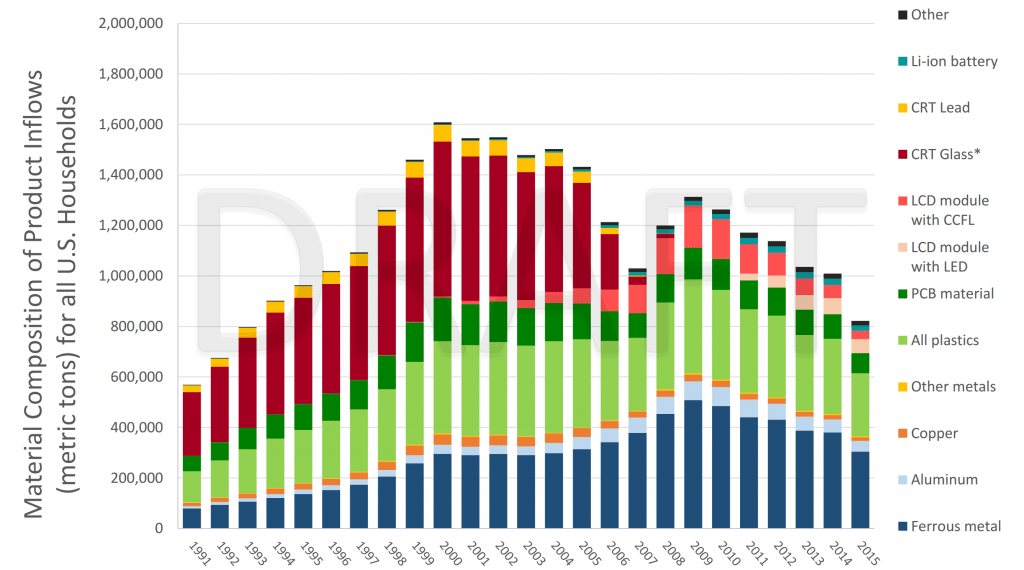 The weight of materials used in consumer electronics has decreased in recent years.

Most components inside new devices decreased by weight in the last several years studied. Even so, the types of materials used in products remained relatively consistent, aside from the notable disappearance of leaded CRT glass and appearance of cold-cathode fluorescent lamps (CCFLs) and LEDs. The graph shows ferrous metals, plastics and printed circuit boards continuing to dominate the materials list.

However, the repercussions of the weight decreases had not fully reached the recycling industry by 2015, the study shows (2015 was the last year studied in the research). The weight of products coming into the waste stream steadily increased over the years. Big changes like the slowing of CRT disposal were made up for by an increase in LCD and LED TVs in the waste stream. 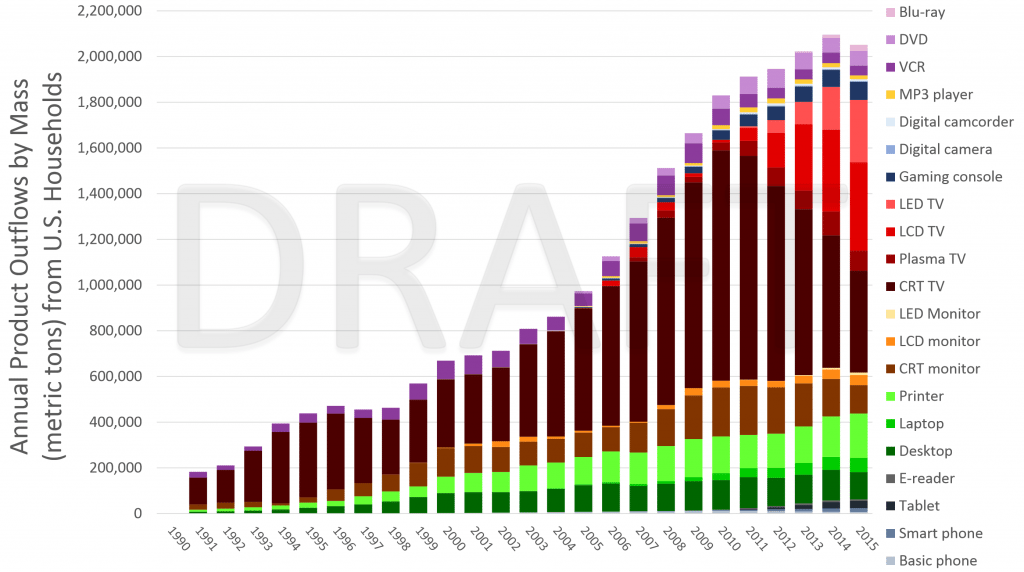 The weight of consumer electronics entering the waste stream grew steadily from 1990 through 2015.

Since 2015, consumer electronics have declined as a portion of the municipal solid waste (MSW) stream, Alcorn of CTA said. It’s a change from previous years, he added, when electronic material was a “fast increasing” component of MSW.

Alcorn attributed it primarily to lightweighting, and in part to the growth of the reuse industry and to extended producer responsibility (EPR) laws.

CTA recently announced that its e-Cycling Leadership Initiative, a collaboration between numerous industry sectors to promote consumer electronics recycling, has contributed to the recycling of more than 4 billion pounds since it began in 2010. Alcorn said manufacturers spend about $125 million each year to collect and recycle their products in the U.S.

But although the volume and treatment of electronics at end-of-life has garnered substantial discussion and action, Alcorn said there hasn’t been as much discussion of the materials used in consumer electronics products, particularly as the materials have changed dramatically and will continue to do so into the future.

“More change is coming, there’s no doubt,” he said. “We’re going to see new products, new devices, new uses of technology in the consumer space, and we will also see with that a long-term trend toward ‘dematerialization,’ if you will.”

The effort constitutes the first phase of a larger effort to create a sustainable materials management (SMM) model to quantify the footprint of consumer technology, Babbitt said. The next phase will adapt and apply the model to current consumption and disposal to analyze emerging trends.