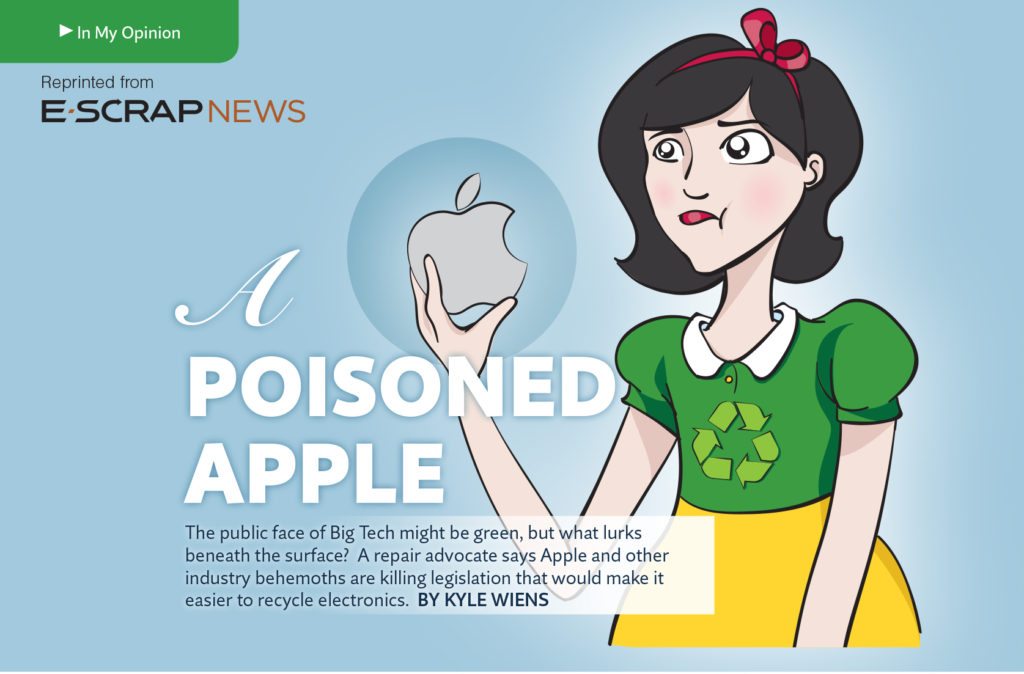 We were down to the wire – and we knew it. For years, my company, iFixit, has been working with recycling companies, repair professionals, refurbishers and activists to pass a state law that would make it easier for people to fix electronics. In June, it seemed like all our hard work was paying off: “Right to repair” legislation for electronics had enough momentum in New York for a vote.

Over 16,000 New Yorkers had emailed their legislators in support of our bill – known as S3998 or the Fair Repair Act. Local repair techs visited the state capital and showed lawmakers there how to fix their computers. The right to repair movement was making national headlines. And people all over the country were asking New York to take a stand against planned obsolescence and become the first state in the U.S. to pass a right to repair law for electronic devices.

All we needed was for lawmakers to call for a vote before New York’s legislative session closed at the end of June. So, we held our breath, crossed our fingers, and waited. But the vote never came. Despite widespread support, the Fair Repair Act never made it out of committee.

Why? Because Apple didn’t want it to. As the Washington Post and The Huffington Post reported, big tech lobbyists from Apple, IBM, Cisco and Xerox quietly fought against the bill. And, ultimately, right to repair died a quiet death behind closed doors. “Apple’s lobbyists wielded their influence and essentially killed a bill that would have tremendously benefitted New York consumers,” said Gay Gordon-Byrne, executive director of Repair.org, a trade group that supports electronics-repair legislation. “It would have made it easier, cheaper, and more convenient for people to repair devices. It also would have helped recyclers reuse and refurbish on a larger scale. Apple opposed legislation that would have made electronics a more sustainable part of our lives.”

Certainly, it seems an odd tack for Apple to take. No entity has done more to brand itself as an environmentally responsible tech company than Apple has. Apple even brought on former EPA head Lisa Jackson to help direct its environmental initiatives. And it was Jackson who proudly introduced Apple’s new iPhone recycling robot, Liam, to the world back in March.

Apple relies heavily on its green street cred. So why is a company that touts the importance of recycling trying to stop a law that would make gadgets easier to reuse? What about right to repair has “Big Tech” so scared?

The basics on the battle

According to the Consumer Technology Association, the average American household owns 28 different consumer electronics – televisions, tablets and much more. As we all know, electronics break – frequently. In fact, a recent study by the German environmental agency found that the life span of electronic products is actually getting shorter. Batteries wear out on sleek smartphones, screens shatter on ultra-lightweight tablets and circuits blow on flat-screen televisions.

Unfortunately, fixing those products is more difficult than it should be. Many manufacturers discourage repair outside of “approved” networks. They don’t sell replacement parts to third parties and they don’t share disassembly or service information with the public or independent recycling facilities. The harder and more expensive it is to fix something; the fewer people are likely to do it. The result is that products that could be refurbished are winding up in landfills and shredders.

Right to repair would reverse that paradigm. It requires makers of electronics to share their diagnostic materials, circuit schematics and repair information with the product’s owner and with independent repair techs. If made law, right to repair would also require OEMs to sell replacement parts and diagnostic tools at a fair price.

“We don’t have to keep buying new gadgets. In fact, we should insist on the right to keep old ones running,” writes The Wall Street Journal’s Geoffrey Fowler. He became an advocate for right to repair after Samsung wouldn’t give him service information for a broken television. “[S]killed gadget owners and independent repair pros deserve access to the information they need to do the best job they can.”

And he’s right. There’s tremendous financial opportunity in repair and refurbishment. In a 2015 report, a European think tank found that circular economy business models (in which products are reused, repaired and remanufactured) add economic value, create jobs, save materials costs and are a “powerful spur” to innovation. The organization estimates that if mobile phone collection rates increased to 50 percent and 41 percent of collection yields were remanufactured, the market-wide savings on manufacturing material could yield $1 billion.

And reuse businesses share in that profit. “Depending on a [smartphone’s] condition, resale after refurbishment is a viable business opportunity as secondary market prices are estimated to be up to 60 percent of the original price,” the Ellen MacArthur Foundation found.

We are on the verge of a golden era of recycling. A laptop worth a dollar as scrap, parted out, could be worth a hundred times that. All it would take is a little more information about the products we’re processing. Information that the manufacturers already have. Information that would be easy for them to share.

But they don’t want to. Last year, four states (including New York) considered some version of a right to repair law for electronics. In each state, the bill was opposed by Apple, IBM, Cisco and Xerox. They claimed that right to repair jeopardizes their intellectual property. They also argue that no one is as qualified to fix their electronics as they are. But I don’t think that Big Tech’s objection to the law has much to do with safety or intellectual property. I think it has everything to do with profit: Sharing information and selling parts could negatively affect their bottom lines.

When manufacturers restrict the availability of parts, tools, and repair information, they limit the end-of-life value of their products because only the OEM has the resources required to fix them. Apple, for example, officially limits the repair of their products to just “authorized” repair techs. Last year, the company even remotely bricked some iPhones that had undergone third-party repairs to the screen. It took an exposé on “Error 53,” as it was called by the press, for Apple to reverse course, apologize, and restore functionality to affected iPhones. But the fact remains: Apple has been historically opposed to unauthorized third parties fixing or refurbishing Apple products.

“It has certainly come to my attention that Apple is opposed to this bill,” Massachusetts state representative Claire Cronin, a Democrat who co-sponsored Right to Repair legislation in the Bay State, told the Huffington Post. She added that manufacturers are currently propping up a “repair monopoly.” “The subsequent lack of competition leads to higher costs for consumers and businesses,” Cronin said. Not coincidentally, the Massachusetts Right to Repair bill also died in committee.

Electronics recycling operations are the world’s final line of defense against e-waste. But they face mounting obstacles. Many modern electronics, including Apple’s iPad and Microsoft’s Surface, feature sealed-up designs and glued-down batteries. They are time-consuming and sometimes dangerous to recycle. And as commodities prices have fallen, recycling companies have faced razor-thin profit margins. Without reuse to balance the scales, modern tablets are unprofitable to recycle. 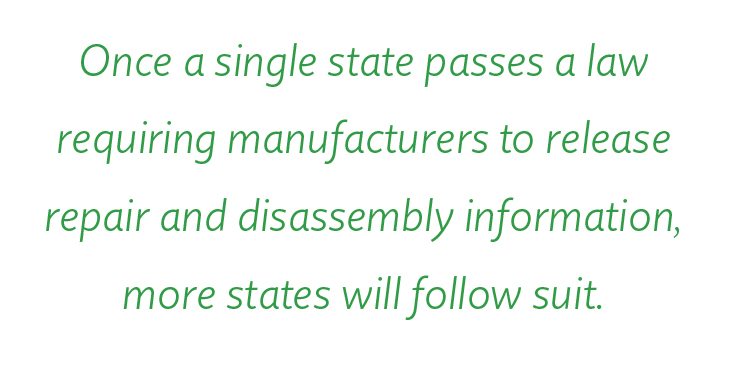 While incoming weights are down, total units are up. Americans discard millions of electronics every single year, and most of these products have batteries. Even Apple’s Liam robot, which only processes iPhones, could never dismantle enough devices to keep up with demand. It’s up to this industry, a network of independent recycling facilities, to do the heavy lifting. Our companies are fighting the good fight, finding ways to process products that were never designed to be recycled.

Jim Levine, who runs IT asset management and recycling firm Regency Technologies, said a significant percentage of the inbound material received by his company is routed through tech repair facilities. “If the design and distribution of original equipment that comes in … took repair, refurbishment and parts recovery into consideration at the outset, then the opportunities for growth would be considerable,” he noted.

Product designers have always ignored the needs of the recycling industry – just ask the engineers behind the lead-lined CRT. There are no signs that trend will change. But what could change is the flow of parts and information. Right to repair laws would make sure that recycling bodies have the information they need to disassemble and demanufacture electronics. By requiring manufacturers to sell replacement parts and service tools, more operators will have the option to diversify into device refurbishment.

“A vote for right to repair measures is also a vote for good recycling practices,” said Damon Beres, Huffington Post’s senior technology editor. “If Apple were legally bound to release its schematics, for instance, repair shops and recyclers alike would be able to utilize every piece of a gadget and reuse them in refurbished products.”

All it takes is for one state to pass a right to repair law for electronics. Once a single state passes a law requiring manufacturers to release repair and disassembly information, more states will follow suit. And then that information – and profit potential – becomes available to every recycling firm.

Apple and other OEMs assassinated right to repair legislation this year, but they can’t keep this legislation down forever. It’s too important – for device owners, for repair professionals, for recyclers and for the environment. If we have any shot of managing the growing tide of e-waste, information about how to repair, refurbish and reuse electronics has been widely available.

“Electronics always came with schematics. Devices have always been designed to be repaired,” says Louis Rossmann, a New York repair specialist and a vocal supporter of Right to Repair legislation for electronics. Rossmann is known for repairing laptops that Apple’s own repair techs have deemed unrepairable. “People need to realize that this is not the norm, that this is the problem, that a very, very, very small part of our history as a species was spent in the dark when it came to repairing technology, and it is time to have it come to an end.”

Right to repair will be back next year, and it will have even more support. It will show up in even more states. And people will continue to fight for this legislation. Because it’s a common sense solution to a global problem. One that benefits recycling operations and consumers.

And Apple shouldn’t stand in the way of that.

Kyle Wiens is the co-founder of iFixit, the open source repair community that empowers millions of people to fix their broken stuff. He can be contacted at [email protected].