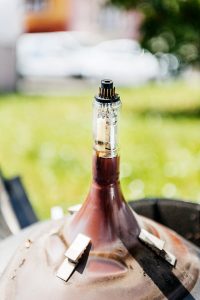 Recent collection figures in Washington and California tell a similar tale: CRTs, while continuing to enter the state programs in large quantities, are beginning to fade as flat-panel displays (FPDs) and other lightweight devices become more common in collection streams.

But the same dynamic is not yet taking place in other parts of the country. North Carolina is currently projecting its influx of CRTs in the waste stream to remain steady in the near future, and state officials aren’t certain a dramatic drop is coming any time soon.

‘Smaller and smaller piece of the stream’

Miles Kuntz, who manages the state program as a staffer at the Washington Department of Ecology, credits the declines in overall collections to less CRTs coming in and more FPDs gradually beginning to replace them.

“It’s been a steady but slow decline since that peak in 2013, so I think that’s what’s happening is we’re seeing those CRTs finally become a smaller and smaller piece of the waste stream, instead of a larger piece, and it’s going to continue doing that,” Kuntz said.

The numbers out of California put the decline in even starker relief.

“We are past peak CRT [volumes], and I think the question now is at what rate will this decline continue,” said CalRecycle’s Jeff Hunts.

The trend seems to be continuing in California this year. Between January and May of 2016, just under 31 million pounds of CRT glass were sent downstream, a fall of 26 percent from the nearly 42 million pounds of glass shipped during the same period in 2015.

A recently released report in Ontario also showed plateauing volumes of CRTs being collected in that jurisdiction.

North Carolina, on the other hand, isn’t yet seeing the declines seen in Washington and California.

According to estimates supplied by the state, 93.2 percent of the TVs collected during the 2014-2015 program year were CRTs. For the 2015-2016 year, the state projects those numbers to remain essentially the same, with CRTs accounting for about 93.0 percent of the stream.

So why isn’t North Carolina’s CRT stream beginning to fade?

“Essentially, more of the backlog has come out in states like Washington. And we’re still clearly working through the backlog of legacy TVs in particular,” said Rob Taylor, local government assistance team leader at the North Carolina Department of Environmental Quality.

Taylor called attention to lower per-capita collection rates in North Carolina as a cause for the robust TV volumes. The state’s program collected an average of 3.84 pounds per person during the 2014-2015 program year. For comparison’s sake, Washington’s per-capita collection was about 6 pounds in 2015.

“We’ve been slower to recover them,” Taylor noted.

But that’s not to say some communities in North Carolina haven’t begun to see CRT volumes dwindle. The state’s Orange County, for instance, has had a collection program in place since 2003 and currently sees CRT TVs account for less than half of its stream.

Taylor thinks statewide numbers could begin to plateau over the next several years. “But no one wants to say that for sure,” he said.