Gold standard in the Golden State

This story originally appeared in the June 2016 issue of E-Scrap News. 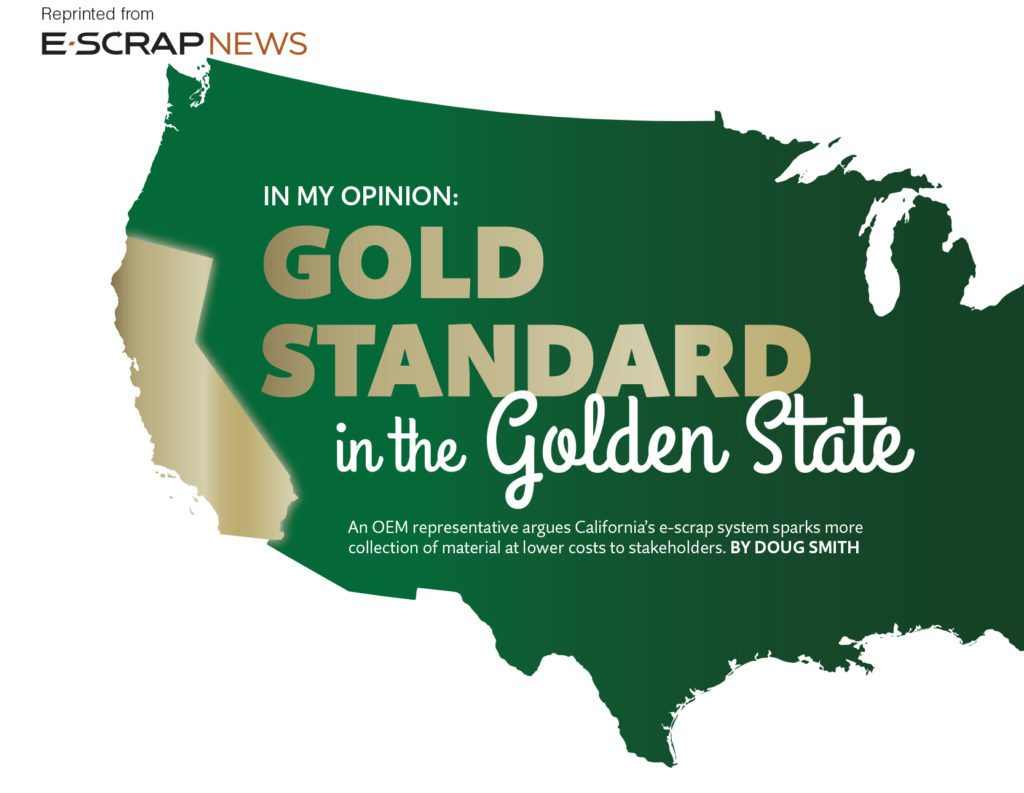 It’s been 16 years since the first attempt at state e-scrap legislation was enacted – a landfill ban for monitors and TVs in Massachusetts. That law was aimed at eliminating the threat of toxic material in old devices leaking out of landfills and contaminating groundwater.

Since then, more than 20 other states have passed laws with the same goal, and many have aimed to spark corporate action through policy. In these extended producer responsibility (EPR) systems, manufacturers are required to pay for electronics recovery networks. The idea behind such frameworks is that manufacturers will have an incentive to redesign their products if they have to incorporate the cost of collection and recycling into the price of their goods.

California, on the other hand, aimed to avoid hoisting another “unfunded mandate” upon local communities and in 2003 passed a law providing funding in a different way.

In the Golden State, consumers are charged a recycling fee when they purchase certain electronics, and those payments fund the state’s network for collecting and managing end-of-life material. The legislation was crafted by longtime state lawmaker and environmental champion Byron Sher.

There are thousands upon thousands of discussions that can be had when it comes to the approaches and philosophies of different state e-scrap laws. An ongoing argument persists over which systems work best. Some of the talking points are good, some are bad, and some are ugly and frustrating. So it’s best just to let the data do the talking.

The chart shows the details of one original equipment manufacturer’s U.S. electronics recycling for the past nine years. Working within the California system, the company has collected just over 230 million pounds in that time frame, and its total cost has been nothing. When looking at the other 49 states combined, the company has collected around 170 million pounds at a cost of over $38 million.

These figures help illustrate that California, which accounts for roughly 12 percent of the U.S. population, has a program that generally collects more material than the rest of the country. And it does so without the mandatory targets or problematic convenience coverage requirements that are written into law in many other states.

The reason for this disproportionate collection breakdown is the state of California pays a bounty for scrap TVs and monitors. This bounty, which exists because of the state’s recycling fee charged at the point of sale (POS), covers the collection and recycling of old TVs and monitors as well as that of all other electronics and small appliances. The bounty creates intense competition for collection, a stark contrast to other states where state and local officials are trying to find ways to increase collection coverage. 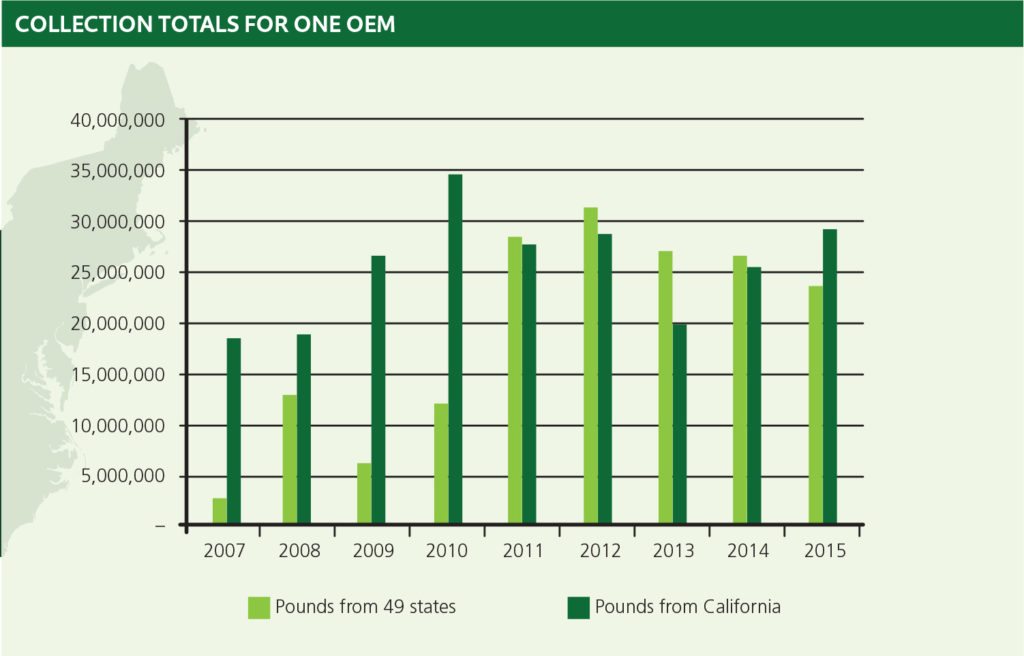 It’s also important to note that even though a number of distinct state programs exist, they are in reality all tied together when manufacturers are forced to cover the cost of recycling. State, county and local taxes can all vary and are collected at POS using complex retailer software tools, but the manufacturer selling price is the same in California as it is in all other jurisdictions.

In California, a 50-pound TV will carry a $5 recycling fee. But since manufacturers have to increase selling prices to account for the buried recycling costs, customers in California pay twice and end up subsidizing e-scrap services in EPR states.

Customers living in states that have lower-than-average incomes also disproportionately subsidize EPR states with no benefit. A consumer living in a poorer area of the country sees lower wages, but a new electronic device that person may be buying will carry the same level of built-in recycling cost as products in front of consumers in wealthier parts of the nation.

Green design does not need incentives

The realities of product innovation is another area that must be clearly understood when this topic is debated.

OEMs improve product design every year, and many of these innovations make for a more “green” product. However, though EPR regulations were built in part because supporters wanted to spur more environmentally conscious products, they do nothing to reward OEM green design improvements. No EPR state has ever allowed a reduction in obligation cost due to “green” design, with the exception of lightweighting.

In fact, EPR systems really only push for innovation in infrastructure, not products. I’ll sometimes say we should build TVs so they behave like salmon. At the end of life, the TVs would swim back to the factory where they were hatched. The swimming TV image is a little ridiculous, but it does point to the fact that most of the cost and management responsibility handed to OEMs exists in the realm of logistics. In EPR for electronics, manufacturer money and energy is almost entirely devoted to ensuring proper collection and management of material. We are driven to find better, more efficient processes to meet obligations. There is little actual incentive to increase the recoverable value in every new product.

Green design is thriving, but it is driven by forces other than e-scrap collection networks rooted in EPR.

Fee success in other product types

To conclude, I would direct the reader’s attention back to the chart referenced earlier. Over the course of nearly a decade, one manufacturer collected 25 percent more tons of material in California than the other 49 states combined. That should give the industry pause and cause us to ask if the $38 million paid by the company to finance EPR systems could have been spent differently.

I do find it encouraging to see more attention being paid to POS fees attached to other traditionally hard-to-recycle items, such as car batteries, carpet, mattresses, paint and tires. Fee-funded programs for those types of products continue to expand in the U.S., and they have resulted in very few dissatisfied stakeholders and customers.

Perhaps the electronics recycling industry can take a cue from those initiatives and the success of the California system. Or maybe we should just try to coax Sen. Sher out of retirement to set the U.S. on the path to an improved national e-scrap system.

Doug Smith is the director of corporate environment, safety and health for Sony Electronics. He can be contacted at [email protected]