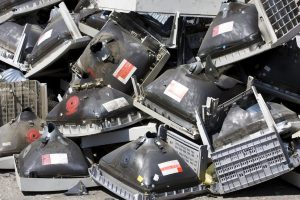 A bill in the Illinois Senate that would have limited the ability of e-scrap certification programs to enforce their standards will not get a vote during the spring legislative session.

Steve Morrill, a lobbyist recently retained by leaders of the R2 and e-Stewards certification programs, confirmed the development with E-Scrap News. He said he met Sen David Koehler, the bill’s lead sponsor, earlier this month.

Morrill said he’s hopeful Koehler will “never call the bill for a vote, though his commitment left open that possibility during the fall veto session.”

The bill, HB 6321, once seemed destined to become law in Illinois. It unanimously passed the Illinois House by a vote of 114-0 in April and was scheduled for a third reading and possible vote last week.

The bill prevents accreditation standards, such as R2 and e-Stewards, from penalizing their members for sending CRT glass to a storage cell program on a solid waste landfill operated by Peoria Disposal Company (PDC) and Kuusakoski Recycling. R2 does not allow its members to use the downstream outlet and e-Stewards only permits the activity as a “conditionally allowable option.”

“ISRI was able to educate Illinois senators and the governor on the issue and successfully halt the progress of the bill,” Johnson said in a statement.

According to John Lingelbach, the executive director of SERI, which administers the R2 certification program, R2’s Technical Advisory Committee is expected to meet later this year to address a long list of topics, including Kuusakoski’s retrievable storage method.

Morrill, the Illinois lobbyist, noted he’s hopeful “direct engagement” between Kuusakoski, PDC and R2 will help avoid a vote on the stalled legislation during the fall veto session.