Lobbyist attempts to down Illinois bill 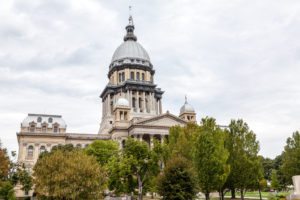 A lobbyist has been hired by R2 and e-Stewards to stage a last-minute fight against a bill that’s moving swiftly through the Illinois legislature.

The bill, HB 6321, would eliminate certification requirements under the Illinois electronics recycling program and prevent R2 or e-Stewards from penalizing and preventing companies placing CRT glass in storage cells for future retrieval. That retrieval strategy has been pushed forward by a pair of partners at a landfill in Peoria, Ill. over the last year.

Attorney and lobbyist Steve Morrill of Illinois-based Morrill & Associates noted he is entering the legislative battle late in the game (“after half-time” is how he put it), but he said his goal is to stop the measure on the grounds that it is unconstitutional.

At present, R2 forbids certified companies from sending CRT glass to landfill for storage. The e-Stewards certification, meanwhile, does not consider the practice recycling but does deem it a conditionally allowable option.

If passed, the Illinois bill would require both certifications to alter their policies and allow certified companies in Illinois to send CRT glass for retrievable storage.

The only currently active CRT glass storage operation in the country is run by Kuusakoski Recycling and Peoria Disposal Company. The two companies work together to place CRT glass on the grounds of a solid waste landfill in Peoria but have been criticized for failing to recycle the material.

In a position paper, BAN, the creator of the e-Stewards certification, states that HB 6321 is “misguided and a violation of our constitutional rights.” In its own position paper, R2 states that Illinois “cannot and should not dictate the recycling standards that private, international certification programs like R2 develop and that companies voluntarily use to further their business interests.”

Morrill said he is meeting “with the proponents [of HB 6321] and the Senate sponsor [David Koehler]” this week to share his clients’ concerns with the measure and “come up with an agreed resolution.”

“If that does not materialize, I expect that the bill to be considered by the Senate Committee next week,” Morrill said.