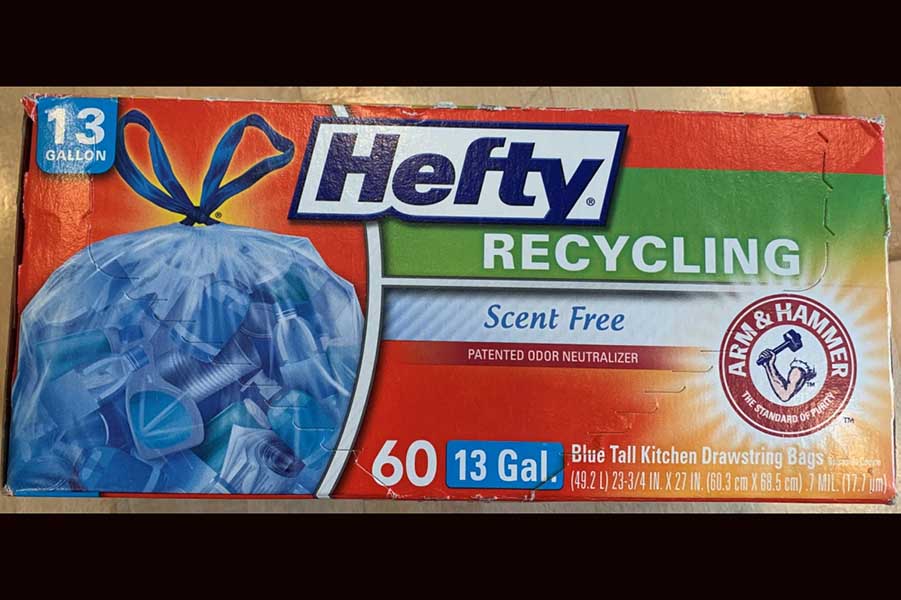 An Oakland, Calif. resident dropped her lawsuit against Reynolds Consumer Product regarding the company’s recycling bags, but in Connecticut a similar case continues.

Reynolds Consumer Products has staved off one of the recent legal challenges to its Hefty Recycling bag marketing claims.

The company sells Hefty brand bags marketed for holding curbside recyclables. The product and its claims have drawn lawsuits from Connecticut’s attorney general and a California resident, both of whom allege the marketing claims are illegal because the bags aren’t compatible with curbside recyclables sorting infrastructure.

Seeking class-action status, Hanscom sued in U.S. District Court for the Northern District of California, claiming Reynolds was engaging in “unlawful, unfair, and deceptive business practices with respect to the advertising, marketing, and sale of Hefty brand Recycling Bags.” The complaint alleges that MRFs can’t recover the polyethylene bags, and MRFs will often simply dispose of any bagged recyclables coming down the conveyor belt.

The Hefty bag packaging states that the product is “developed for use in municipal recycling programs where applicable,” noted Hanscom’s complaint, which alleges the disclaimer text fails to comply with the Federal Trade Commission’s Green Guides, which are referenced by California law.

“The statement fails to qualify the fact that the Products are made from LDPE and that LDPE bags are not recyclable nor are they suitable for recycling,” the complaint claims, among a number of other allegations. “In the absence of clarifying language, reasonable consumers understand this to mean that the Product is designed for recycling wherever municipal recycling is available, which is false. Therefore, the representation is neither a clear nor prominent disclaimer as required by the Green Guides.”

The lawsuit sought an injunction blocking sales of the bags, unless the packaging and marketing language were modified. The parties sparred over whether Hanscom had a legal right to seek the injunction, and the judge on Aug. 18 decided she did.

Then, on Aug. 28, Hanscom voluntarily dismissed her lawsuit without explanation. Her attorney didn’t respond to a Resource Recycling email inquiring about the reason for dropping the case. 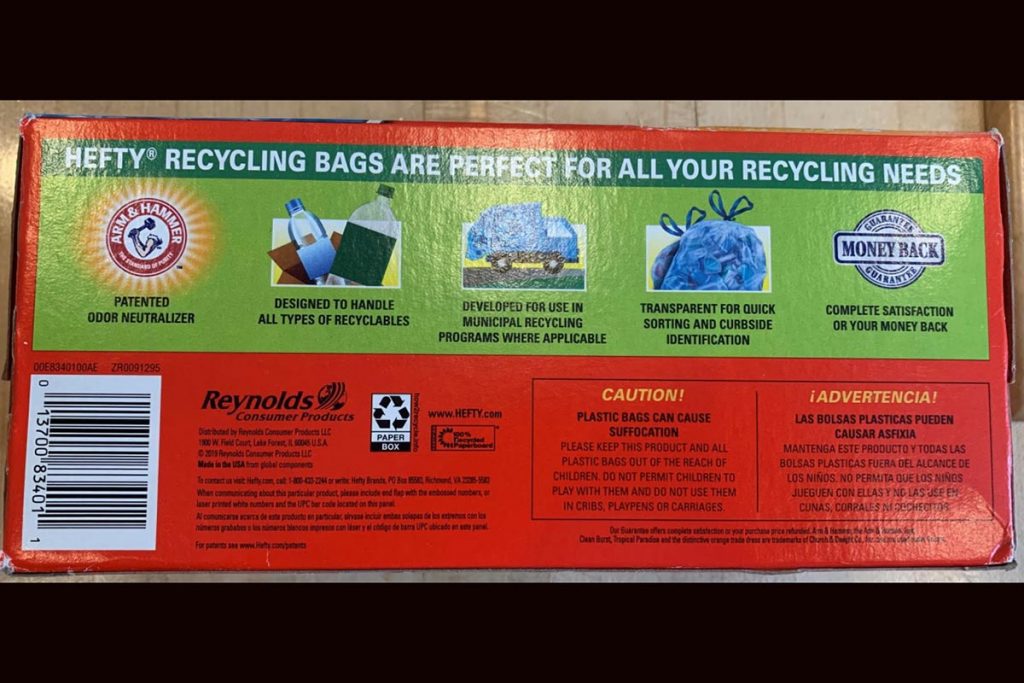 The recycling-related messaging found on the rear panel of Hefty’s recycling bag box is one focus of the Connecticut case.

Meanwhile, the parties are continuing to spar over Tong’s complaint, which was filed in a Connecticut state court in Hartford.

On Sept. 2, an attorney for Reynolds Consumer Products filed a motion to dismiss the state’s lawsuit, with the company insisting that the bags are compatible with curbside recycling practices and the use of the word “recycling” doesn’t imply that the polyethylene bag, itself, is recyclable.

“All it implies is that a recycling bag is designed to be used as part of the recycling process – which is true,” according to the filing. “There is nothing misleading about labeling recycling bags consistent with their intended use.”

The company pointed to a couple of examples of municipalities that allow their residents to place recyclables in bags, New Fairfield, Conn., and New York City. The state hasn’t yet responded to the arguments put forth by the company.