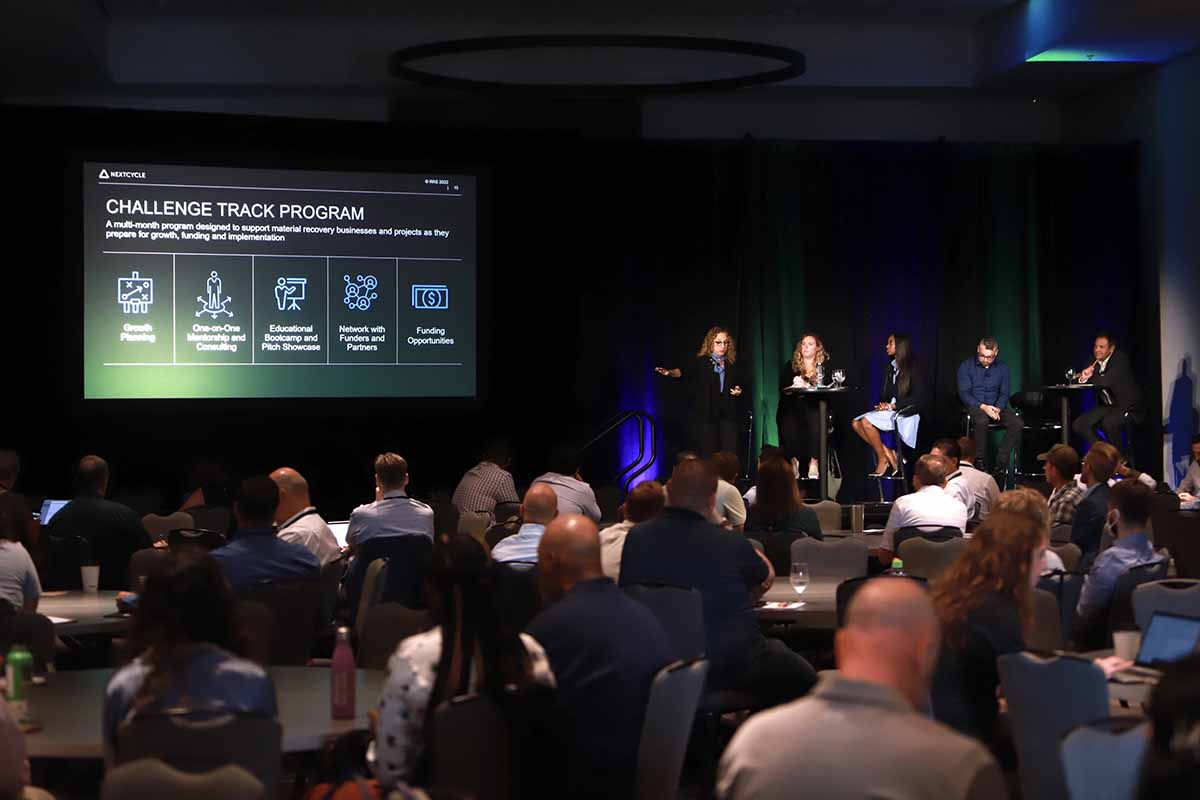 A sold-out Resource Recycling Conference kicked off this week with in-depth explorations of how public policy and technology advancements are set to transform the recycling industry.

Held in Austin, Texas this year, the event began Monday morning with MRF tours, workshops and on-stage discussions, including a quick-hits session titled “Fresh Ideas to Inspire Progress,” designed to get the conversational juices flowing for the remainder of the three-day event.

One of those fresh ideas was summarized by Andi Tolzdorf, director of the Emmet County, Mich. Department of Public Works. The county’s dual-stream MRF underwent an upgrade in 2020, installing three sorting robots from AMP Robotics on the mixed-containers line. Some robots are targeting four different materials simultaneously, however, and can’t always capture all the targeted materials in one pass, she said.

“Anybody that knows about robotics knows that that is a lot we’re asking them to do,” she told a crowd of about 140 people.

The line was engineered to include a surge hopper after the robots, allowing staff to put the system into “loop mode” and re-run materials from the hopper through the robots, giving the machines multiple chances to pick the targeted recyclables until all that remains is residue, Tolzdorf said. The capability frees up the manual sorters to move to the facility’s fiber line while the robots do their work.

The setup is distinct from many other container lines, she noted, and it improved the container-line efficiency by about 60%.

Also on Monday, the conference took an in-depth look at extended producer responsibility (EPR) policies, which are set to remake the recycling landscape in several states. Monday’s afternoon’s policy town hall session focused on what impacts EPR will have on local programs

A series of EPR-focused Policy Talks, organized by Eunomia Research and Consulting, also began Monday afternoon and will run through Wednesday in the event’s exhibit hall.

The discussions come at a pivotal time, as California, Maine and Oregon work to begin implementing legislation with producer responsibility provisions and other states consider their own bills.

In addition to high-level policy discussions, the conference brought 90 professionals inside notable MRFs owned by Balcones Resources and Texas Disposal Systems so they could watch how recycling works on the ground.

And new to this year’s conference was the inaugural 50 States Summit, which The Recycling Partnership hosted on Monday. Held in conjunction with the Resource Recycling Conference, that event brought together state recycling officials from around the country for custom sessions and networking events.