Chinese paper giant will up intake of OCC in Wisconsin 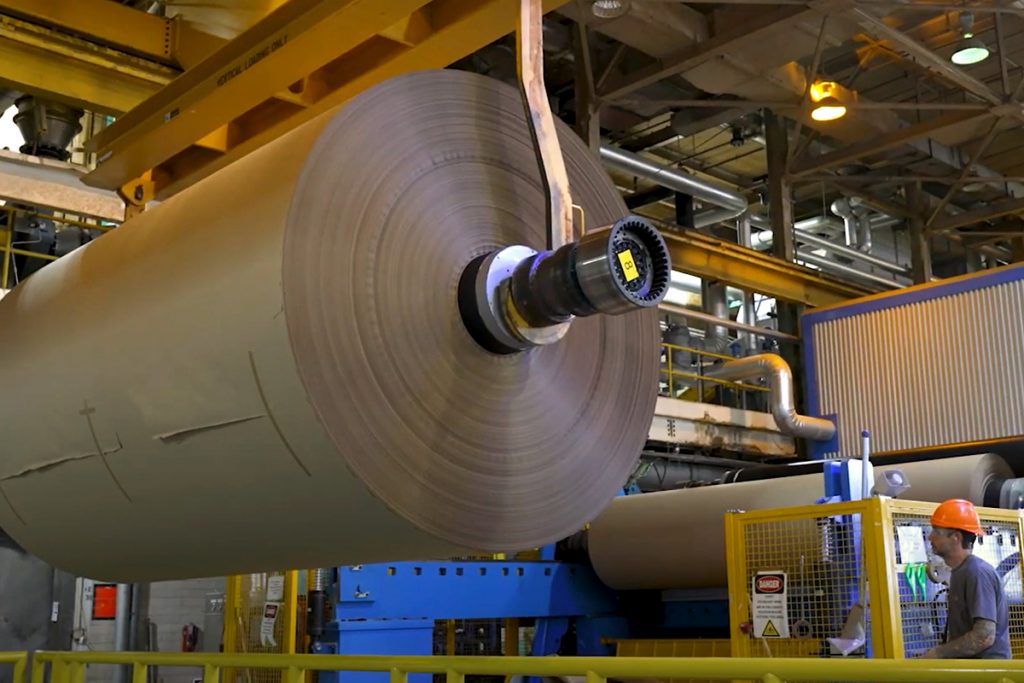 The B25 machine, which produces recycled corrugated medium and linerboard for packaging, at the Biron, Wis. mill. | Courtesy of ND Paper

ND Paper is boosting its appetite for recovered fiber bales by engaging in a machine conversion project at a Midwest mill that is expected to be completed later this year.

ND Paper, which is the U.S. subsidiary of Chinese paper products manufacturing giant Nine Dragons, plans to install additional OCC pulping equipment as part of the conversion initiative in Biron, Wis., located in the central part of the state. The result will be increased demand for recovered fiber bales at the plant.

Its B25 machine takes in pulp from OCC and produces 270,000 short tons annually of corrugated medium and linerboard for packaging. The B26 line, meanwhile, uses virgin fiber to produce 260,000 short tons per year of coated mechanical papers, such as those used in magazines and catalogs.

The company will convert B26 to producing lightweight recycled packaging products, according to a press release. After the change-over, B26 will have a capacity of over 500,000 short tons. The output will consist of both recycled kraft papers and containerboard, an ND Paper spokesman said.

The project also includes installing a new state-of-the-art pulping facility to provide over 1,550 short tons per day of OCC pulp, the release notes. All of the pulp will be consumed at the mill, the spokesman said.

Construction is expected to begin anytime, with commissioning anticipated by the end of the year. When the project is finished, the plant’s total annual capacity will grow from roughly 530,000 short tons to over 800,000 short tons.

In terms of feedstock supply, the ND Paper spokesman would not comment on whether the plant will be able to take mixed paper or sorted residential paper bales in addition to OCC bales. The company also wouldn’t comment on whether it will need additional upstream suppliers to help it supply enough recovered fiber for the mill.

The conversion project is just the latest of its type for ND Paper, which, like many other paper makers, are reacting to decreased demand for office paper and paper used for ads and publications and increased demand for boxes used in e-commerce.

In 2018, Nine Dragons purchased the Biron mill, along with mills in Fairmont, W.Va. and in the Maine towns of Rumford and Old Town. Since then, ND Paper has added some amount of fiber recycling capacity at each.

Earlier this month, the Northeast Recycling Council (NERC) released an update to its “Summary of Announced Increased Capacity to Use Recycled Paper” report. The update includes projects at 28 mills, of which 17 have been completed.

“The list of additional recycled paper capacity includes new paper mills, expansion of existing capacity at packaging mills and conversions of printed paper machines at existing mills to produce packaging paper (e.g. from newsprint to packaging),” according to a NERC press release. “The list also includes several mills that are now producing recycled fiber pulp for export in addition to making packaging paper. It also includes a mill designed to use food contaminated paper from commercial sources.”

NERC has been reporting on national investments in paper recycling infrastructure since November 2018. The report has been updated eight times. The latest ND Paper announcement came after the NERC report was updated.

Separately, in a recent op-ed for Resource Recycling, Heidi Brock, president and CEO of the American Forest & Paper Association, wrote that the paper industry is planning to invest $5 billion between 2019 and the end of 2023 to increase capacity to consume recycled fiber. The projects are expected to increase the amount of recovered paper used by U.S. paper and paperboard mills by approximately 8 million tons, a 25% increase over 2020 levels, she wrote.