EPR is an approach that shifts the costs of managing products and packaging at their end of life onto the companies that produce, distribute or sell items into a given jurisdiction.

But a well-designed EPR system doesn’t just transfer the costs to producers.

Ideally, the framework also requires producers to invest in appropriate programs and infrastructure to meet recycling rate targets; provides economic incentives to producers to shift to packaging types that can be more easily recycled through the use of modulated fees; spawns investments in new infrastructure that can handle harder-to-recycle material; and ensures universal access to recycling for all households.

This article will offer a synopsis of recent research that identified the potential impacts on cost, material collection and more if well-crafted paper and packaging EPR were implemented in the Evergreen State.

Looking at key questions of EPR

Over the past few years there have been a number of studies carried out in Washington that have focused on how the state can best improve its recycling system, manage plastic pollution and create the conditions to lead to a circular future.

The work has extended down to the county level, with King County in particular serving as a leader in this evidence-based approach. With a population of roughly 2.27 million (including the city of Seattle), King County is the most-populous county in Washington and the 12th most-populous in the U.S.

The jurisdiction also has a long history of engagement on waste and recycling issues, a trend that continued when King County’s Responsible Recycling Task Force (RRTF) was created in 2018. The task force has pursued a coordinated approach to improving recycling in the region, commissioning studies to project the impacts of various policy options.

In December 2020, sustainability consultancy Eunomia Research & Consulting completed a study for King County and Seattle Public Utilities to assess the impacts of extended producer responsibility. The result was a series of four reports comparing the costs and benefits of different configurations of EPR to the current recycling system in Washington.

These studies built off of the RRTF’s Recommendations Report of January 2019 and Cascadia Consulting’s report for King County, “Extended Producer Responsibility Policy Framework and Implementation Model: Residential Recycling of Packaging and Paper Products in Washington State,” published in March 2020.

The body of work effectively answers the primary questions being asked by many stakeholders:

Answering the questions above will allow states to learn from previous programs and make evidence-based decisions to create systems that can achieve the greatest benefits.

Eunomia adapted its proprietary waste and recycling systems cost and benefit tool, which is called Hermes. The tool was used to make several different assessments.

First, researchers calculated the current cost of depot and curbside service for both single- and multi-family households throughout Washington state. The costs of the current recycling system included the cost of collection, as well as transfer and sorting, plus the cost incurred by municipalities for managing services and contracts and carrying out educational activities.

Next, the team assessed the future system costs under a specific EPR framework.

The system used as a model is one in which all households – single-family and multi-family – are able to recycle a common set of materials at the curb or on-property, with additional materials (including films and expanded polystyrene) collected through drop-off facilities. This emphasis on comprehensive recycling access is important. Although roughly 3.1 million Washington households currently have access to a curbside garbage service, as of 2017, over 360,000 households in Washington (9% of single-family and 15% of multi-family households) did not have any access to a curbside recycling service.

Further, in the model used in the study, producers, through producer responsibility organizations (PROs), invest in consistent public education on what can and can’t be recycled. They also finance improvements to existing sorting infrastructure and new secondary sorting facilities to enable material specific targets to be achieved.

Producers in the model also cover capital costs associated with additional vehicles, carts and containers, as well as the costs of governmental program oversight.

The Hermes tool used cost and material-flow data from each region of Washington to create the cost-benefit analysis. First, material flow estimates were calculated using secondary data sources, including state-level studies and information from municipalities and MRFs.

Next, analysis was carried out to determine relevant tonnages for each type of PPP material in the program. This included the amount generated, collected for recycling, sorted, reprocessed and disposed of. Tonnages were calculated for each category for each material and included both single-family and multi-family households. When calculating the recycling rate, Eunomia excluded the material losses at sorting and processing facilities, so that only the amount of material sent to end markets to become new products and materials was captured. 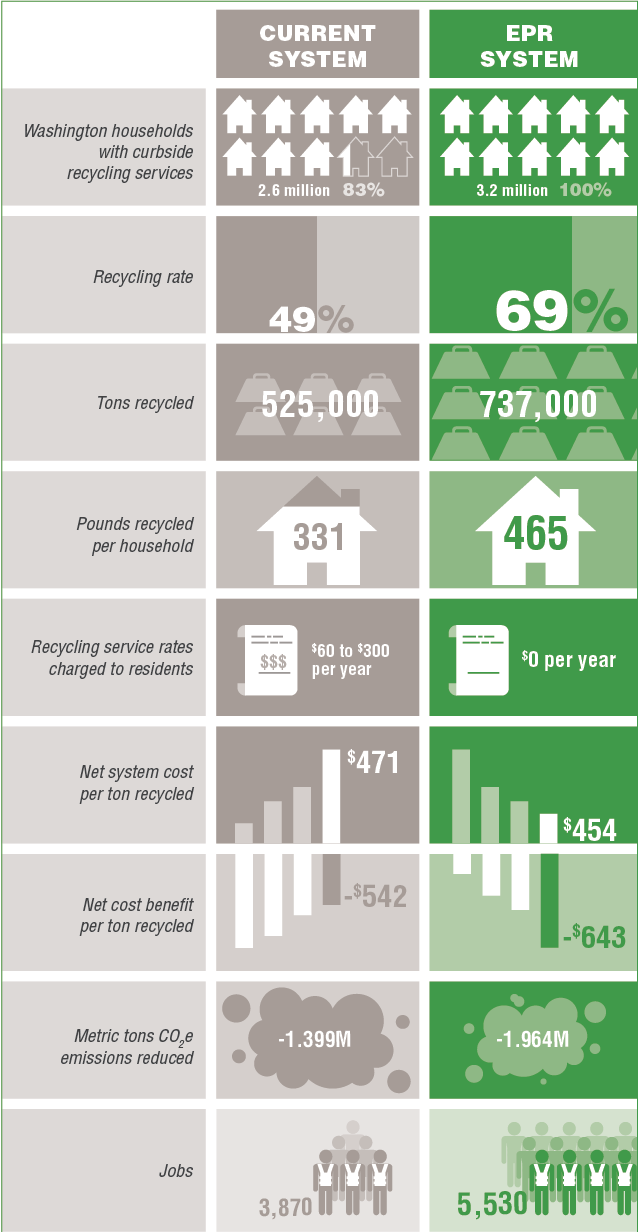 The graphic above summarizes the costs and benefits of recycling in Washington in 2019 versus what could be achieved if the model EPR system was fully implemented in the state. (2019 was the most current year for which data was available when this analysis was undertaken.)

The cost of PPP collection and processing in Washington in 2019 was estimated at $274 million, equivalent to $471 per ton of actually recycled material. The social and environmental benefits of the current system include:

Our study showed that a system with EPR resulted in greater net benefits than the current system for residential recycling in Washington. The net cost of recycling would decrease to $454 per ton. Moreover, the social and environmental benefits of a future EPR system include:

That means an increase of 200,000 metric tons of material recycled, achieving a recycling rate of just under 70% and reducing greenhouse gas emissions by 40%. The recycling rate calculated assumes the composition of PPP remains the same. However, if under EPR, producer fees are modulated to encourage packaging to be more easily recycled, the recycling rate could exceed the number calculated here.

In terms of system specifics, the study concluded that the most successful policy would include recycling and reuse targets; full producer funding for recycling services; consistent public education across state, funded and coordinated by producers; and a harmonized list of recyclable items across the state.

Some of those elements have been included in policy proposals that have been seen in the state already.

Recent legislative efforts have exemplified the desire for EPR in Washington, but have so far fallen short, with the effort in 2020 failing to move forward and the 2021 bill, SB5022, being amended to remove the EPR language.

AS noted earlier, SB 5697 in the 2022 session also failed to pass, experts in the state expect that the effort will continue and EPR for packaging will move forward within the next few years. Unlike some other states that have introduced EPR bills, including Maine, Washington’s bills have included recycling targets in the legislation, making them outcome-based. For example, SB 5697 states that all covered products must be reusable, recyclable or compostable by 2031, with a 75% reuse and recycling rate.

Outcome-based EPR programs that are clear on the goals that producers have to meet and also provide an element of flexibility as to where and how to invest are commonly used in Europe and have resulted in high levels of household access and higher recycling rates.

EPR can be structured to dramatically increase the recycling rate in Washington and other jurisdictions around the country and the globe. However, such success depends on solid policy research and collaboration with producers to allow for flexibility in operating the system while ensuring that the system delivers to a high standard.

Analyzing the outcomes prior to implementing legislation arms legislators with the data they need to develop clear policy and set appropriate material-specific targets that will ensure the necessary investment infrastructure and education to enable the targets to be met.

Furthermore, producers, who may be both financially and operationally responsible for managing recycling systems under EPR, can use such analyses to determine what aspects of a system will be most cost-effective while delivering the highest recycling rates. Material-specific targets, as in Washington’s original SB5022 bill or the legislation that passed in Oregon in August 2021 (which includes targets for plastic packaging and food serviceware), hold producers accountable for delivering a high-performing recycling system while allowing them the flexibility to design the most cost-effective system possible.

Washington has shown a clear interest in using data to facilitate legislation that delivers the intended impact. This kind of research provides examples of effective and efficient recycling systems that can be implemented. States should commission more research of this type to understand the benefits of EPR and other intended interventions to ensure that environmental policy has a sound data and evidence base.

Sarah Edwards is the North America director of Eunomia Research & Consulting Inc. She can be contacted at [email protected]