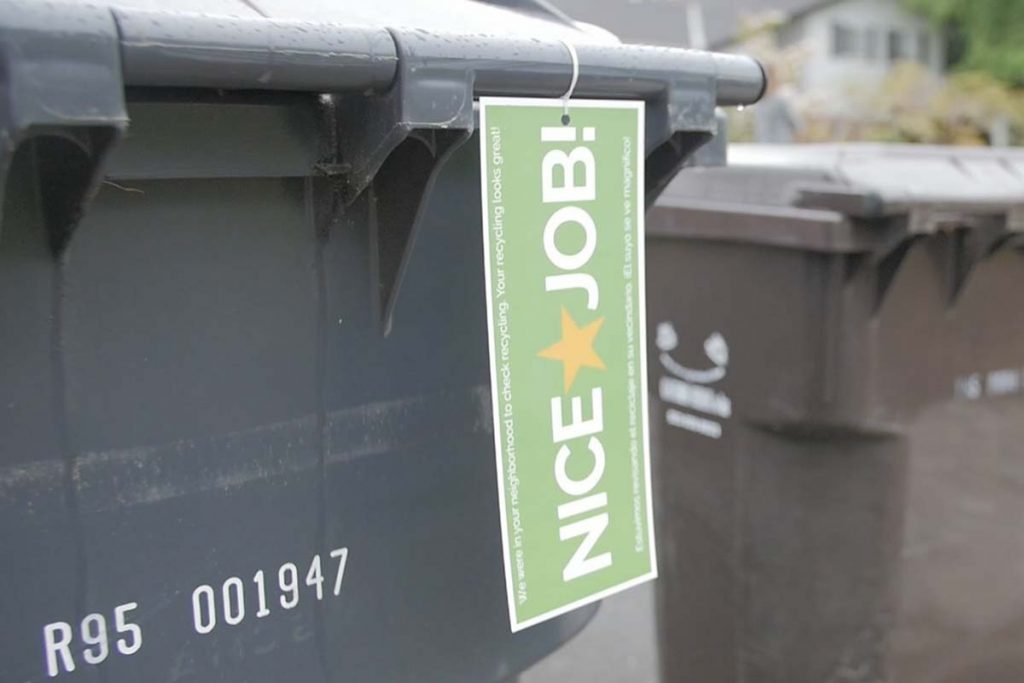 Clackamas County, Ore. was one of a number of case studies used to illustrate the data in SWANA’s report. | Clackamas Sustainability & Solid Waste Program/SWANA Report

Leaving “oops” tags on contaminated recycling carts and providing positive feedback to those with clean carts is one of the most effective ways to reduce contamination, though it can be pricey, according to a new report.

SWANA Executive Director and CEO David Biderman said the new report is a “powerful tool for local governments assessing how to improve their recycling programs and reduce contamination.”

“With the recent issuance of EPA’s National Recycling Strategy and its identification of reducing contamination as a key objective, the report is particularly timely,” he said in a press release. “SWANA will be working closely with EPA and other recycling stakeholders to implement the Strategy, using some of the lessons learned from this report.”

“In implementing these types of enforcement options, recycling and sustainability program managers must have the support of their local elected officials as there is likely to be pushback from under-performing residents,” the report said.

The report notes that while reliable data on the effectiveness of public outreach strategies are limited or non-existent, case studies were used to analyze each strategy.

Social media and mailers were the most effective ways to reach customers, and the least costly. The Recycling Partnership’s West Coast Contamination Initiative Research Report found that 50% of respondents in a survey of California, Oregon and Washington got their recycling program information from the internet and 10% from the cart label or mailed information.

While cart tagging is one of the most effective methods of actually reducing curbside recycling contamination, the report noted that it is labor-intensive. While costs vary by jurisdiction, the report estimates that a campaign including at least 5,000 homes ranges from $1.50 to $2.50 per household for direct engagement and mailings plus $5,000 for boosted social media and $20,000 for community signage.

However, money spent on inspecting and tagging can be recouped by the savings of lower contamination rates. In Fort Worth, Texas, the city expects to save about $475,000 per year by reducing its contamination rate from 28% to 21% through its cart inspection and tagging program, which costs $500,000 annually.

In Clackamas County, Ore., a six-week program in 2018 to tag clean carts with a “nice job” tag and contaminated carts with an “oops” tag improved contamination rates. Inspectors checked 11,809 set-out carts, and during the first week, only 37% got a “nice job” tag. By the sixth and final week of the study, that number had risen to 54%.