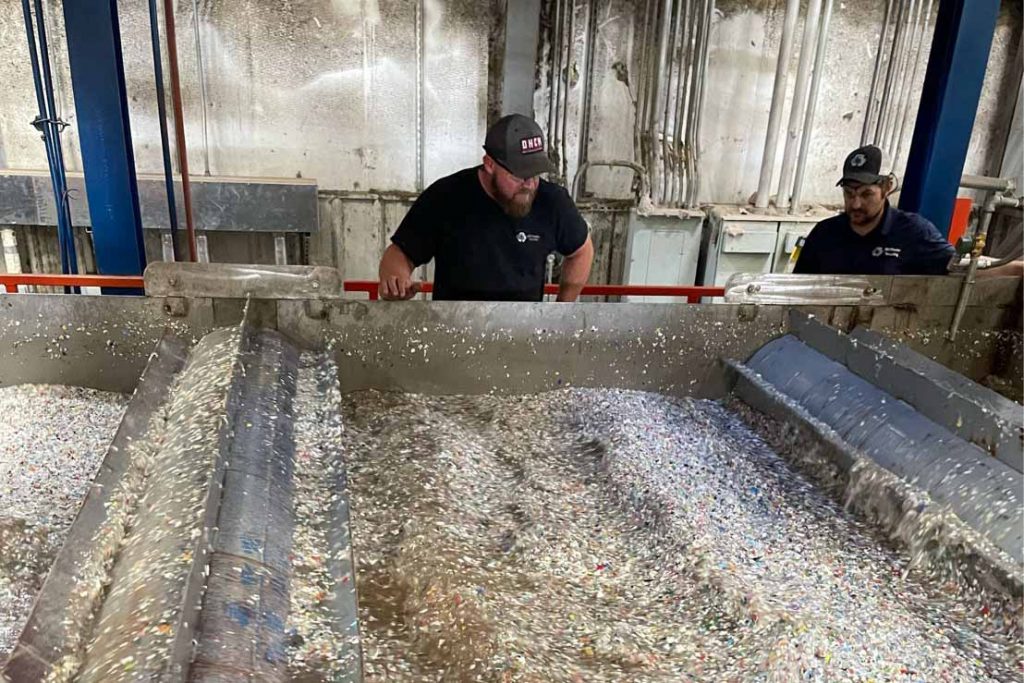 KW Plastics in recent weeks started up a polypropylene wash line that will increase its recycling capacity by 100 million pounds per year. Company General Manager Scott Saunders said the line will boost efficiency.

Troy, Ala.-based KW installed its last wash line in 2013, and the company has since been running both PP tubs and lids as well as HDPE bulky rigids on that line. That meant the company had to split time on the line based on the resin it was processing.

KW has increased the amount of PP tubs and lids it processes substantially since the 2013 line launched, and more recently bulky rigid HDPE has “grown dramatically,” Saunders said in an interview.

“We saw a big increase in demand there, which utilized a lot of our capacity for that material,” he explained.

The bulky rigids demand increase began around late 2019, when new commitments from consumer product companies came on-line, he added. The growth in both material streams led KW to commission a separate PP wash line to increase efficiency and add capacity.

“It’s a big benefit for us when you don’t have to do product changes,” Saunders said.

The PP wash line began construction 14 months ago and was scheduled to be finished this past June, but there were a number of delays related to the pandemic. The wash line started up at the beginning of November.

The line has a full capacity of 100 million pounds per year.

“Now we have a big line to run each of our main commodity grades,” Saunders said. Additionally, KW has a smaller line designed to run regrind, he said.

“There are some states that have said PP is not recyclable, but you’ve got ready, willing and able buyers that have paid up to $700 a ton or more for that commodity for the last almost year. How can you say it’s not recyclable?”

With the wash line and other facility expansion projects, KW has invested about $25 million over the past 18 months, Saunders said. And the company anticipates doing a similar investment in the coming 18 months.

“We’re firm believers in the long-term growth of this industry,” Saunders said.

Most of the wash line was designed and constructed in-house, bringing in a handful of external components such as spin dryers and granulators. The company values its ability to build and maintain the equipment, because it allows for adjustment to respond to changes in the inbound stream, Saunders said.

KW buys material from throughout the continental U.S., Canada and Mexico, and there can be variance in the products that come through its doors.

“You really don’t know how the raw material is going to change,” Saunders said.

Reflecting on the state of PP recovery

A number of recent regulatory and legislative moves have spurred discussions of the PP recycling sector, particularly challenges in building up collection and processing of the resin.

It’s collected and reclaimed at a lower rate than PET and HDPE – the U.S. EPA estimates a 2.7% PP recovery rate in 2018, compared with 14.8% for HDPE and 25.4% for PET – but there are industry pushes to improve collection. The Polypropylene Recycling Coalition is issuing grants to MRFs to increase sortation of PP and provide more material for reclaimers, for example.

At the same time, PP has been impacted by efforts to reduce contamination in the recycling stream and pare back the list of collected materials in local programs.

A recent labeling law in California will likely exclude PP from the list of “recyclable” materials due to its current collection rate. A group of recycling stakeholders earlier this year similarly advised California’s recycling regulatory agency to adopt a definition that would exclude PP. And in early 2020, PP was downgraded from “widely recyclable” to “check locally” in the How2Recycle labeling initiative, a reflection of questions over collection access as well as how much collected PP was truly moving to reclaimers.

As North America’s largest PP reclaimer, KW has a vantage point into the current state of the sector. And despite the challenges, the company sees positive signs in current and future PP recovery.

“There are some states that have said PP is not recyclable, but you’ve got ready, willing and able buyers that have paid up to $700 a ton or more for that commodity for the last almost year,” Saunders said. “How can you say it’s not recyclable?”

He agreed PP does not have the market penetration of resins such as PET and HDPE, but he pointed to their decades-long duration in the curbside stream. PP, on the other hand, has only been recycled significantly for less than 10 years.

Saunders suggested the plastics recycling industry needs to come up with a definition that would enable innovation and growth of new materials in the recycling stream, rather than judging new additions by the same criteria as longtime recyclables.

“The industry and the public has become so concerned with greenwashing that we could be hurting our own efforts,” he noted.

A version of this story appeared in Plastics Recycling Update on December 1.