Aluminum can producers to lobby for deposit legislation 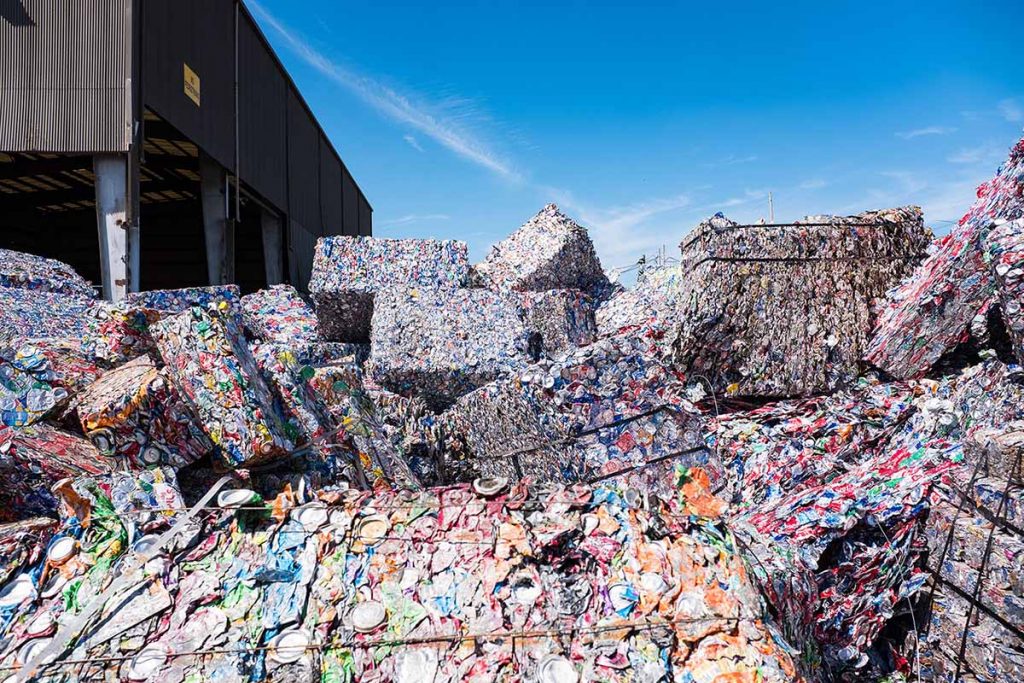 Constellium’s plant in Muscle Shoals, Ala. can annually recycle up to 340,000 metric tons of post- and pre-consumer aluminum scrap. | Courtesy of Constellium

“This is going to be a serious push,” Scott Breen, vice president of sustainability at the Can Manufacturers Institute (CMI), told Resource Recycling in an interview.

CMI last week announced a new industry goal for used beverage can (UBC) recycling in the U.S., as well as broad strategies to achieve the goal. CMI’s members set a joint goal of a 70% UBC recycling rate by 2030, up from 45% last year.

CMI members backing the effort are aluminum sheet suppliers Constellium, Kaiser Aluminum, Novelis and Tri-Arrows Aluminum, and beverage can manufacturers Ardagh Metal Packaging, Canpack, Crown Holdings and Envases. Boosting UBC collection provides a greater supply of metal for recycling into new cans. Partly because of the alloys used, 93% of UBCs are recycled back into beverage cans, Breen said. Industrywide, beverage cans’ recycled content is around 73% (including both post-consumer and post-industrial content).

According to newly released data, 1.38 billion pounds of UBCs were recycled in the U.S. last year. Boosting the UBC recycling rate from 45% to 70% would generate an additional 757 million pounds. As of last month, UBCs were worth over 81 cents per pound, according to RecyclingMarkets.net.

To achieve the 70% recycling rate target, CMI’s effort will include four broad “pillars,” which are to push for deposit programs, increase household and away-from-home recycling, help MRFs capture more UBCs, and increase consumer awareness about can recycling.

The first initiative, to push deposit programs at both the state and federal levels, will be the cornerstone of the effort, Breen explained. CMI formed a deposits task force with the Aluminum Association to push for deposit programs.

Although Breen said he couldn’t disclose how much money has been budgeted for the campaign, he said most of the money would go toward arguing for well-designed deposit programs, because that’s the best opportunity for moving the needle, he said. He noted that about 40% of the UBCs the industry gets back for recycling come from 10 deposit states.

Breen acknowledged that instituting a new deposit program is a big change to the status quo.

“We think it’s worth it,” he said. “We think there’s a way to do it that’s efficient and effective, that will be convenient to the consumer and also minimize burdens on everybody, so we can get these containers back so we can put them in a new can.”

CMI has been broadcasting its interest in pushing bottle bills for some time. In March 2020, leaders from CMI and the Aluminum Association published an op-ed in Resource Recycling in favor of deposit programs. The piece detailed what they believe a “well-designed” deposit system they could support looks like. More recently, CMI, the National Association for PET Container Resources and the Glass Packaging Institute authored a joint statement in September calling for the passage of well-designed deposit programs.

By “well-designed,” the groups said they want easy and convenient redemption for consumers, unredeemed deposit money to be used to enhance the recycling system, one private stewardship organization to manage the system, appropriate deposit amounts, inclusion of all beverage types and containers, and clear deposit labeling on containers.

Breen told Resource Recycling CMI wants to see deposit systems in which aluminum can producers pay lower fees to stewardship organizations than other container manufacturers, a recognition of the fact that UBCs generate more commodity sales revenue for the recycling system than PET and glass.

Other groups have come to openly support bottle bills in recent years, as well. The Association of Plastic Recyclers (APR) in May approved a position statement in support of bottle deposit systems (APR owns Resource Recycling, Inc., publisher of Resource Recycling). In addition, beverage companies, which have long opposed deposits because they raise the price of their products, have changed their positions to now support some deposit programs, depending on the particulars of how they’re structured.

How MRFs fit in

As can manufacturers lobby for deposit programs, it will be important to listen to the concerns of other recycling system stakeholders, Breen said.

Some waste management companies have opposed efforts to expand deposit programs because doing so diverts valuable aluminum and plastics away from their MRFs. That was the case in New York state, where curbside recycling stakeholders fought a state effort to add beverage types to the program.

Breen said MRFs’ concerns about removing high-value material from the recycling stream is a fair one, and CMI’s own research has demonstrated that MRFs rely on revenue from UBC sales. For example, research by consulting firm Gershman, Brickner & Bratton (GBB) found that UBCs make up 0.4% of a MRF’s inbound stream in states with container redemption laws and 2.2% of the stream in states without them.

But Breen pointed out that curbside recycling still happens in the 10 states with deposit systems, and he referenced some steps that could be taken to ease the transition for MRFs to a deposit program. For example, he suggested diverting a portion of unredeemed deposit revenue to MRFs, as well as allowing MRFs to redeem containers for their full deposit value.

“There are things that can be done. We have to listen and think about what is fair and think systemwide,” he said.

Breen added that deposits can be paired with extended producer responsibility (EPR) systems, which help raise revenue to fund recycling systems. Deposits make sense for beverage containers, in particular, because they’re often consumed on the go, he said.

Another one of the pillars of CMI’s effort involves building on its can capture program, run with the assistance of The Recycling Partnership. That program has provided grants to help fund eddy current separator equipment at MRFs.

Breen said the can capture grants required a matching contribution from the MRF. Because of the relatively high value of aluminum, the equipment tends to pay for itself very quickly, he said. Because CMI wants to fund equipment that aligns with the business case, the organization is exploring a lease-to-own program, he said. Through such a program, CMI would provide the equipment to the MRF at no cost, and the MRF would remit a portion of the additional UBC sales revenue enabled by the sorting equipment, until the equipment is paid off, at which point, the MRF would keep it.

CMI intends to publish a roadmap in early 2022 with more details on activities within the four pillars of its effort.