Why carton recycling has stalled in one state 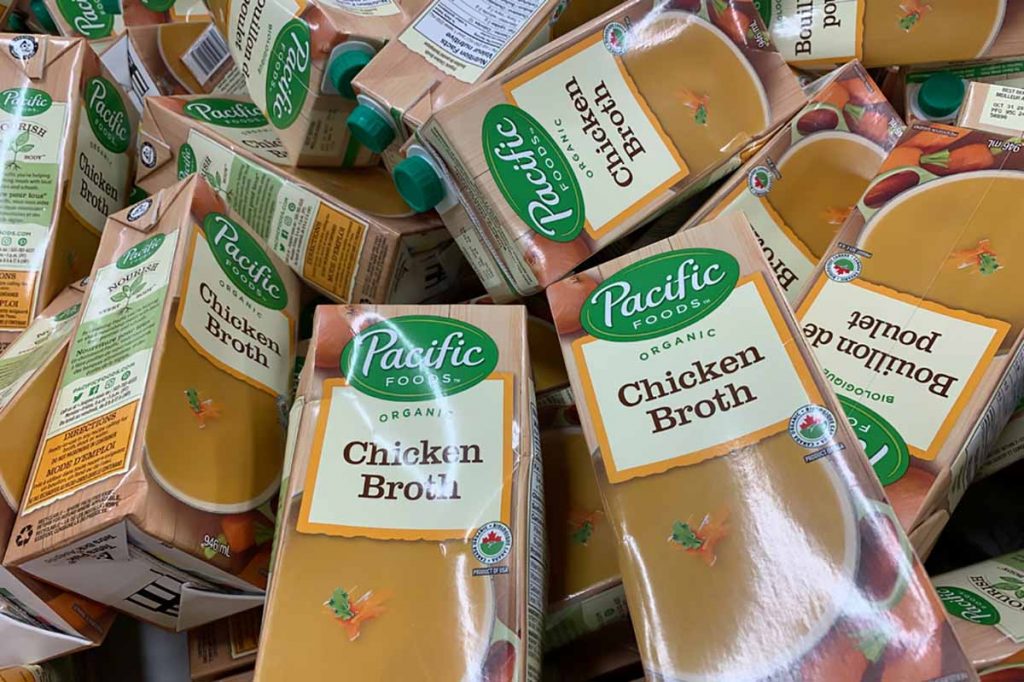 Food and beverage cartons are not accepted in curbside recycling in a number of large municipalities in Massachusetts. | Velour Noire / Shutterstock

When MRF operators sat down with Massachusetts Department of Environmental Protection officials in 2018 to develop a non-mandated accepted recyclables list, cartons didn’t make the cut.

Three years later, end market developments in the region have renewed hope that the packaging format can be widely accepted across the Bay State. But large Massachusetts municipalities continue to keep food and beverage cartons out of their curbside programs.

The situation underscores the complexities of having manufacturers available to provide the market pull necessary for recycling viability.

“What we’re waiting for first is for the markets to say ‘We’re ready to go,’ and then we can go back to MassDEP and say ‘We have these markets. How can we make it happen?'” said Jason Pelz, vice president of recycling projects for the Carton Council of North America.

Officials from the Massachusetts Department of Environmental Protection (MassDEP) convened material recovery facilities (MRFs) from around the state in 2018 to respond to troubled recycling markets. Many of China’s National Sword scrap import restrictions came into effect in that year, tanking demand – and thus, prices – for key recyclables. With a glut of U.S. recyclables supply, manufacturers were able to demand better bale quality.

Contamination, which had long been an issue, suddenly became a bigger problem.

“China Sword was the proverbial straw that broke the camel’s back and convinced the MRF operators that they needed to work together to reduce contamination,” said MassDEP spokesman Ed Coletta, who added that his department started talking about ways to strengthen the economics of recycling with MRFs and municipalities in 2014 and then launched a pilot program to create an anti-contamination toolkit in 2016.

MassDEP convened the 2018 MRF meeting to seek consensus from processors on a new list of acceptable materials, the idea being that consistency across Massachusetts would help reduce confusion and foster cleaner recycling, Coletta said.

Today, MassDEP’s Recycle Smart MA website relays to the public the list of materials generally accepted in different programs. Communities and processors are not required to follow the list’s guidance, but the resource does serve as an important starting point in communicating packaging recyclability to Massachusetts’ 6.9 million residents.

At the meeting, “in or out” decisions for different packaging formats were based on three criteria, Coletta said: Can the MRF equipment handle the material, is there a consistent market, and does the material harm workers or equipment?

For cartons, MRFs reported weak and relatively distant markets, Coletta said. Additionally, volumes of cartons in the single-stream mix are relatively small, and sorting them into distinct bales adds costs for MRFs.

Historically, when cartons were accepted at Massachusetts MRFs, they were being sorted into mixed-paper bales – or disposed of as residue, he said.

A search for “cartons” on the state’s Recycle Smart site today returns the following message: “For most of Massachusetts, cartons should go in the trash. However, some communities in Western [Massachusetts] do recycle them. If your municipality is on this list, you can put cartons in your recycling bin.”

Realities from the MRF perspective

As the web tool indicates, not every facility in the state jettisoned cartons in the wake of the 2018 meeting. A state-owned dual-stream MRF in Springfield, a city of 154,000 people in western Massachusetts not far from the Connecticut line, decided to continue manually sorting them.

The 60-plus communities served by the MRF were willing to incur the costs of continuing to recycle cartons, Coletta said. However, the MRF serves a region with relatively low population, handling only 5% of the state’s MRF recyclables throughput.

In more densely populated eastern Massachusetts, the city of Cambridge decided to no longer accept cartons curbside, and a local official said that move came as a direct result of communicating with Casella Waste Systems, which operates the largest MRF in the Boston area. Casella representatives didn’t respond to Resource Recycling requests to discuss carton recycling in Massachusetts.

In an interview with Resource Recycling, Mike Orr, recycling director at the city of Cambridge, said during the 2018 meeting the MRFs expressed interest in cutting glass, but MassDEP insisted that material be retained.

Then cartons came up.

“[MRFs] said that putting them in a mixed-paper bale is not really wanted by paper mills, and making a cartons-only bale is prohibitive in terms of space and cost,” he said.

Boston, the largest city in Massachusetts, does not currently accept cartons either. A city spokesman said in a statement that many cartons contain a plastic coating that make them difficult to break down, but he didn’t respond to Resource Recycling requests for additional information about the decision.

This summer, the Boston-area suburb of Newton, population 88,000, launched an outreach effort to inform residents of which materials are accepted, using educational materials from MassDEP’s Recycle Smart campaign. The campaign informs residents that cartons are not accepted in the program. According to the city, the goal of the communications push is to keep contamination under 10% or risk fines from Waste Management, which sorts the city’s curbside recyclables at a MRF in Avon, Mass.

It’s no secret that cartons can be a challenging material for facilities to handle in a profitable manner. Because cartons aren’t overly plentiful in the single-stream mix, it takes significant time for MRFs to store and accumulate enough of them to drop into the baler.

The Northeast Recycling Council (NERC) surveys MRFs each quarter to determine the average value of a blended ton of recyclables. To calculate the blend, NERC in January 2021 asked MRFs to provide 2020 weights of different commodities they sold. The data showed cartons amounted to less than 1% of what MRFs throughout the Northeast sold in 2020.

Nationwide, Waste Management, the largest garbage and recycling company in the country, sees carton acceptance as a patchwork that depends on local end markets.

“Certain communities have included cartons for a while since we expected both volumes and markets to grow,” Waste Management said in a statement to Resource Recycling. “Unfortunately, as recycling markets have constricted, neither the volume nor the demand has grown so we have been hesitant to add cartons to the recycling stream. However, some of our paper markets are willing to accept cartons in the paper mix so we have been able to move this material to market in some instances.”

Pushing for progress in downstream markets

For the carton industry, the pressure is on to maintain carton acceptance in local programs.

Pelz of the Carton Council said carton recycling access sits at around 61% nationally. Under the Federal Trade Commission’s Green Guides, when at least 60% of U.S. households have recycling access for a particular material, then that material can carry unqualified messaging instructing consumers to recycle it. Cartons crossed that 60% threshold in early 2017, allowing the packaging to carry the “chasing arrows” symbol and “please recycle” text.

Pelz said that, through National Sword and COVID-19, various communities have added or dropped carton recycling. But lately he’s been seeing “a pretty good trajectory of positive movement again, where we have a bunch of communities around the country that are looking to add [cartons],” he said.

The key to viable municipal recycling of cartons is, of course, viable downstream markets that allow processors to sort and move the material in an economically sustainable manner.

Cartons are pulped at a number of mills that will accept them in mixed-paper bales, but not all paper mills have the equipment needed to effectively separate the fiber, which is high-quality bleached virgin material, from the plastic and aluminum. The Carton Council prefers to see carton-only bales shipped to facilities with systems equipped to recover the plastic and metal, in addition to the fiber, Pelz said.

According to the Carton Council, a half-dozen U.S. and Canadian manufacturers are able to take carton-only Grade 52 bales, along with paper mills in Mexico and Asia. Pelz said a couple of other projects coming on-line soon are expected to grow that number.

One potential outlet, Continuus Materials in Philadelphia, has temporarily stopped buying cartons as the facility eyes an upgrade, Pelz said.

Elsewhere, Sustana Fiber has an appetite for Grade 52 carton bales at its Wisconsin and Quebec paper mills.

Sustana’s Breakeyville, Quebec mill began taking in PE-lined paper cups years ago. More recently, amid COVID-19-triggered shortages of fiber from offices, the plant has boosted its consumption of cartons, signing a deal earlier this year with an operator of Quebec MRFs to source up to 4,000 metric tons of cartons per year. In recent months, the paper products maker installed high-capacity shredding equipment at the Quebec mill, allowing it to boost consumption of cartons.

Pelz, who in addition to his role at Carton Council serves as vice president of sustainability for the Americas at Tetra Pak, noted the pandemic has been both helpful and harmful to carton recycling. On one hand, it has meant a reduction in sorted office paper scrap, which has driven paper mill demand for cartons, but it has also caused supply-chain problems and delayed recycling company projects.

Still, because of Sustana’s Breakeyville upgrade project, the mill will be able to eventually pull material from a broader area, including the Northeast U.S. and Mid-Atlantic region, Pelz said.

Meanwhile, a different manufacturer, Kelly Green Products, is working to bring its plant in Waterbury, Conn. up to full capacity. The plant recycles cartons into wall and roof boards. Expected to reach full capacity likely in the first quarter of 2022, the Kelly Green Products plant has already received cartons from the Springfield, Mass. MRF, Pelz said.

Once Sustana and Kelly Green Products are ready to buy carton bales from Massachusetts sorting facilities, the Carton Council will return to MassDEP and the MRFs to determine next steps, Pelz said. His group has also helps MRFs finance equipment and facility upgrades needed to recycle cartons.

“We realize that there are challenges, and that’s why we’re here,” Pelz said.