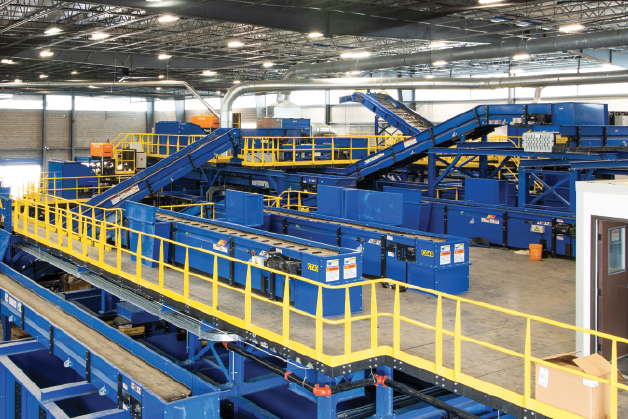 In 2019, Republic Services opened a tech-heavy MRF in Plano, Texas that uses a positive-sorting approach to produce clean bales.

Republic Services spent $34 million on equipment upgrades at its recycling facilities last year, and it closed 12 MRFs in a consolidation effort.

Republic, the second-largest garbage and recycling hauler in the U.S., on July 22 published its 2019 sustainability report. It includes information on facility investments, collected tonnage, end markets and more.

The report also includes details about the COVID-19 pandemic and how it impacted the company’s recycling operations in the first half of 2020.

“We recognize our facilities must continually evolve to address consumer trends, as well as changing package designs and unprecedented levels of contamination,” the company wrote. “In 2019, Republic invested $34 million in technology and equipment upgrades at 39 of our recycling facilities. We now have 79 recycling facilities, down from 91 the previous year, as we’ve consolidated processing to fewer and more advanced facilities to achieve better quality materials for our end-market customers.”

Contacted by Resource Recycling, the company declined to identify which facilities were closed.

The equipment upgrades were in part aimed at improving OCC recovery. The rise of e-commerce has led to smaller corrugated boxes entering the recycling stream, a shift from the big cardboard boxes from commercial generators that dominated the OCC stream in the past.

Optical sorters remain a key tool for sorting paper and plastics at Republic facilities. The company installed 19 more optical sorters at its facilities during 2019, using near-infrared technology and digital cameras to target paper, plastics and other materials. The company noted that its installation of two optical sorters in a Seattle facility “has already resulted in more high-quality paper recovered while ensuring the capture of other high-value materials such as aluminum.”

Aside from equipment, Republic in 2019 invested $2 million in a “multichannel marketing campaign” that ran in six cities. This outreach effort used billboards, radio ads and social media to educate residents on proper recycling.

By conducting audits before and after the outreach campaign in two of the cities, Republic determined that “contamination rates decreased significantly in both communities.”

Overall, the company processed 6 million tons of recyclables in 2019. Republic increased recovery of “targeted commodities” to over 4.5 million tons in 2019, a 2.5% increase compared with 2017. These target materials include OCC, plastics, organics, metals, biogas and oil, according to the report.

“We accomplished this in part by increasing our focus on food and yard waste recovery and ramping up our investment in traditional recycling to improve the quality of recovered materials,” the company wrote. Republic has a goal to increase recovery of these materials by 40% by 2030, from the 2017 baseline.

Republic touched on the market strife that has thrown the recycling sector into turmoil in recent years, noting that the company has responded by innovating and focusing on key commodities. The company also referenced increasing U.S. end market investment.

“On a positive note, investment in domestic paper mills is occurring for the first time in decades, creating a need for high quality cardboard and mixed paper in North America to feed manufacturing,” the company wrote. “For the past two decades, China has been the largest importer of recovered commodities from around the globe. Today, Republic exports less than 1 percent of our processed materials to China.”

The remaining 12% of plastics Nos. 3-7 have “limited or no end markets,” the company stated.

Early on when the COVID-19 pandemic began to hit the U.S., Republic predicted it would create “uncontrollable challenges” to the recycling sector. The report details how the company addressed some of those challenges, beginning with safety measures in its facilities.

Like many MRF operators, Republic bolstered cleaning efforts and enacted social distancing rules at its facilities. The company installed plastic barriers in its MRFs in areas where workers are less than six feet apart.

Beyond the immediate safety impact, the pandemic’s effects were visible in the materials coming into the MRF. The company saw an increase in volume in the residential recycling stream, Republic noted. That led the company to make temporary changes in some communities, including suspending bulk and yard waste service to prioritize garbage and recycling collection. But the interruptions were relatively minimal, according to Republic.

“We’re proud to say that during the height of the pandemic, our recycling operations across the nation continued without interruption,” the company wrote. “Every facility remained open, which became even more important as the demand for paper, particularly corrugated cardboard, increased for domestic paper mills to supply medical manufacturers, grocers and e-commerce shipments.”