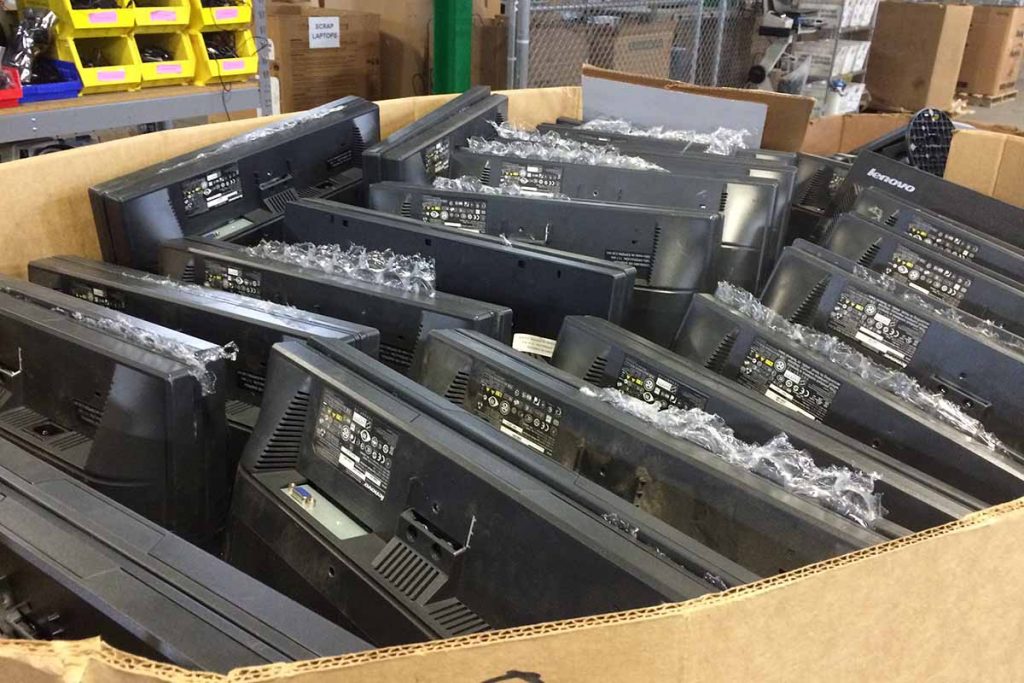 Because of business and public drop-off site closures and public anxiety about virus transmission, e-scrap collections are down across North America. | Dan Leif/ Resource Recycling, Inc.

The coronavirus pandemic has led to major reductions in the collection of used consumer electronics across North America, with some recycling companies reporting volume drops up to 80%.

In New England, for example, e-scrap collection suspensions – and consumer reluctance to drop off electronics at sites that are still open – have contributed to layoffs at Good Point Recycling, which has processing facilities in Middlebury, Vt. and Brockton, Mass.

Robin Ingenthron, founder and CEO of Good Point Recycling, said he was forced to lay off six part-time employees and to eliminate overtime hours availability for the remaining staff. The actions slowed his cash burn rate.

“What you have to do as a business is act quickly,” Ingenthron said. “The companies that get in super trouble aren’t doing their weekly cash flows.”

Business closures, shifting priorities for local governments, and public anxiety about virus transmission have all led to decreased electronics collection across North America. High-profile examples include Best Buy closing its stores, eliminating the option for drop-off at the retailer, and New York City suspending collection inside apartment buildings and at the curb.

The impacts are being felt by state extended producer responsibility (EPR) programs and e-scrap processors that recycle household electronics.

A constriction in collections

Jason Linnell is executive director of the National Center for Electronics Recycling (NCER), a nonprofit group that oversees networks of e-scrap collectors and processors under the Oregon State Contractor Program and the Vermont State Standard Plan. He said collection numbers have decreased in both states.

In Oregon, more material comes in via nonprofit collectors such as Goodwill and Salvation Army than from public agency collections; in Vermont, almost all is collected by county solid waste districts, with a mix of retail locations also collecting material. Those drop-off opportunities have been reduced over virus concerns.

“It’s having an impact. We’re seeing that some collection sites are choosing to stop accepting from the public,” he said.

One example is the Burlington, Vt.-area Chittenden Solid Waste District, which closed all of its drop-off centers except for one. The one that remains open is accepting municipal garbage, recyclables and organics, but not scrap electronics.

Still, Linnell noted that drop-off suspensions have not been universal, and some have remained open but with procedural changes intended to limit person-to-person contact. “We’re not seeing across-the-board, everyone stopping to accept at the moment,” Linnell said.

“Even more so than the permanent drop-off sites, the events are being canceled pretty much across the board as I’ve seen,” he added. “Events have a lot more contact possibilities.”

The cancellations or postponements of collection events started in late March and have continued for those scheduled in April and May, Linnell said. Spring is normally a busy time for collection events, especially around Earth Day, which is April 22, but they will be canceled this year.

It’s too early to know how the crisis will affect collections for the full year, specifically whether it will cause electronics manufacturers to fall short of their recycling obligations under EPR programs. Linnell noted that some processors think they’ll see an increase in collections later in the year.

Linnell said he didn’t know of any state regulators who have decided to waive recycling targets or penalties. He has seen some states offer flexibility to companies when it comes to upcoming program registration and fee-payment deadlines.

“There’s a lot more leeway being granted now for administrative deadlines,” he said.

Multi-pronged strategy from one firm

In Canada, electronics recycling and reuse company Quantum Lifecycle Partners has also seen a decrease in incoming material. With a footprint across the country, the company handles both household electronics and businesses’ IT equipment. The residential stream has been hard hit.

“Residential streams have almost all dried up because even though most municipalities remain open, most are discouraging residents from dropping off recyclables,” said Clayton Miller, vice president of end-of-life sales for Quantum Lifecycle Partners.

Overall, the company remains open but has seen a drop in volume of about 40% to 80%, depending on the region and the vertical, he noted. Miller explained that Quantum plans to take several steps: access government support programs for businesses and employees, offer employees voluntary layoff deals, work through material backlogs and clear out inventories, generate and preserve cash wherever possible, and take advantage of opportunities that emerge, such as the recent uptick in laptop sales for employees working from home.

“Our primary goal is to keep as many people working for as long as possible, while ensuring we emerge from this crisis with a sustainable business ready to serve our customers and their pent up demand,” he said.

To aid businesses, Canadian government leaders are advancing through the lawmaking process a bill establishing the Canadian Emergency Wage Subsidy, which would provide Canadian businesses with up to 75% of each employee’s pre-crisis weekly pay, up to a maximum of 847 Canadian dollars ($610 USD) per week. It would be retroactive to March 15 and remain in effect for three months.

Miller said Quantum Lifecycle Partners is hoping to access the federal program. “We’ll be doing everything we can to preserve jobs and ensure the long term sustainability of Quantum,” he said.

Good Point Recycling mostly handles household material and has a smaller presence in recycling organizations’ electronics. Decreased incoming volumes have hurt cash flow, which was already wounded by a large unpaid bill for processing electronics with cathode-ray tubes, Ingenthron said. Good Point Recycling is processing roughly one-third of the weight it did before the coronavirus crisis, Ingenthron estimated. In March, the number was about half of what it was in March 2019.

He noted the Chittenden County collections were Good Point Recycling’s largest single source in Vermont. In Massachusetts, Ingenthron’s clients include the cities of Quincy and Brookline, and Brookline has halted its collections, he noted. Even with collection programs that remain open, such as Quincy’s, weights gathered have decreased because many residents are wary of driving their CRTs down to a public collection place.

The company has reacted in a number of ways. The staffing and hours cuts reduced weekly payroll from about $20,000 to $14,000, slowing the cash burn rate and buying time to access the PPP loan, Ingenthron said. The layoffs also provided additional physical space between the remaining employees.

Additionally, beginning in late March, Good Point Recycling started aggressively picking up trailers the company knew were only half full of material. That has kept the staff working and money coming in, Ingenthron said.

Like a number of processors, Ingenthron predicts that, after the crisis, a lot of material will enter the recycling system. “Whatever TVs are out there are still out there,” he noted.

But it’ll come sometime after a slow second quarter.

“We think it’s going to be like the potato blight in Ireland for the second quarter,” he said. “But the question is who will survive and who won’t. Those that survive it will have opportunities 12 months from now. The deciding factor will be math.”

In Upstate New York, Sunnking has also seen its inbound volume decrease, and it has had to furlough employees. The Brockport, N.Y.-based processor gets about half of its business from the residential sector and half from commercial clients. When the coronavirus impact began to hit the Empire State, both sides of the business felt the hit, explained Adam Shine, vice president of the company.

Residential collection events started getting canceled throughout New York, alongside all public gatherings. For Sunnking, events account for some 3 million pounds per year. Drop-off collection sites have been “very quiet,” Shine said. Residents are told to stay at home, and electronics recycling is likely not a priority for many in the state as they focus on essential needs.

On the recycling side of the business, the company had 54 employees working in the warehouse when the impacts began. As business slowed and inbound volume dropped to 25% of its former level, the company had to make hard decisions.

“You can’t continue to pay that expense without the associated revenue,” Shine said.

The company ultimately made the decision to furlough 39 employees. In addition to its Brockport location, Sunnking operates a recently opened processing facility in Whitesboro, near Utica, N.Y. Both facilities are operating with reduced staffing levels, Shine said.

“As things start to go back to the way they were, we’ll start to ratchet up again on the recycling side,” Shine said.

In the meantime, the refurbishment and reuse side of the business, where there was a significant backlog of devices to process before the business closures began, has been able to serve the uptick in used-device demand from people working at home.

“That side can make us money and get us through right now,” Shine said.

A version of this story appeared in E-Scrap News on April 10.