For many recycling operators today, the discussion of business viability begins and ends with one material: paper.

“Paper moves the price of whatever the processor can pay or needs to charge the municipality,” Dave Claugus, vice president of Pacific Northwest MRF operator Pioneer Recycling Services, said recently.

Those types of economic realities were front and center during a fiber-focused session at the 2019 Resource Recycling Conference and Trade Show, held in late August in New Orleans.

The discussion was moderated by Mick Barry of Iowa materials processor Mid-America Recycling.

These leaders stressed the importance of maximizing the production of clean paper to survive in today’s markets, and they also touched on end-user developments in North America and India that could reshape recovered paper pricing in the years to come.

As most municipal recycling decision-makers are well aware of by now, plummeting mixed paper values have been central to the economic struggles reverberating through the industry. 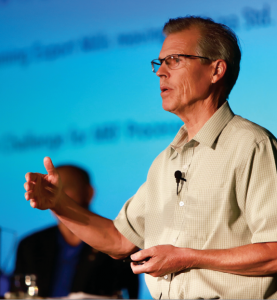 China’s import restrictions heavily impacted mixed paper, as the country went from taking hundreds of thousands of tons per year to buying virtually none. With that demand gone, mixed paper prices have fallen from levels that once topped $100 per ton to zero or negative values in some regions of North America.

Will end users in in the U.S. and elsewhere take more of the material and help bring pricing back up? That’s a critical question, and for the industry to understand the possibilities, it helps to have a grasp on how mixed paper is used now.

Brian Hawkinson of the American Forest & Paper Association (AF&PA) noted mixed paper has been making up a smaller percentage of all recovered fiber consumed in the U.S. over the last decade. In 2009 it made up slightly more than 14% of total recycled consumption, and by 2018 it had dropped to just more than 12%. (OCC, by comparison, today makes up about 71% of all recovered fiber consumed domestically.)

Mixed paper finds two main end markets in the U.S. Recycled paperboard claims 39% of the mixed paper that moves to market in the U.S., and another 37% goes into containerboard. The tissue market takes 19% of mixed paper, and the remaining 5% goes into construction applications and other paper product grades.

The mixed-paper export market has also shifted dramatically over the past decade, and not just because of the National Sword turbulence.

Citing U.S. Census Bureau data, Hawkinson showed that mixed-paper exports dropped substantially in 2010, concurrent with the U.S. economic downturn. That year alone, exports dropped from more than 7.5 million short tons to less than 5 million. Exports remained pretty stable between 4 and 5 million tons per year until 2015, when they started a downward slide that continued through 2018.

If prices do rebound, the industry should not exactly be shocked. In his presentation in New Orleans, Claugus of Pioneer said volatility is the norm in the pricing of recyclables. Recognizing this reality, he said, is key to crafting sustainable recycling contracts between cities and processors.

“Everybody needs to understand this,” he said. “It should be part of your thinking as you approach any kind of contract renegotiation, whether you’re a MRF or a municipality.”

With China seemingly set to have a much smaller role in the global market for all types of recovered fiber, MRFs and other sellers are anxious to see what other overseas buyers emerge.

India has become the current largest buyer of U.S. recovered fiber, and an expert says it is poised to be an even stronger market for the material.

There are around 700 mills in India and that number is growing, said Shailesh Gothal of Gemini Corporation, which brokers recyclables. Those mills are relatively small in size, with a typical Indian mill having a capacity of 100 to 250 metric tons per day, he said.

“India is trying to take a little bit more and help paper recycling,” he said.

The situation on the ground in India seems to indicate the country will be using more paper and will thus need to grow its fiber manufacturing, Gothal said. The country is going through a period of greater urbanization and the government is stable, which will increase the per-capita consumption of paper, he said, particularly given the country’s massive population (with 1.339 billion inhabitants, it is not far behind China).

By grade, 15% of the newsprint consumed by Indian mills comes from within the country, with 85% being imported. But, as has been seen in the U.S. and elsewhere, newsprint production in India is no longer grabbing investment as digital media continues to rise, Gothal said. 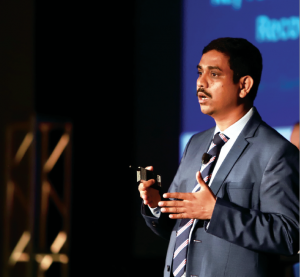 Almost 75% of the recyclables marketed in Ontario are fiber products, so “the gravity of the situation and potential impact was significant,” Yousif said.

In response to the inquiries from municipalities, CIF recommended recycling programs improve their operational systems through fiber sortation upgrades. This improves the quality of the output, in turn increasing access to higher-grade end markets, which Yousif said are more available domestically than low-grade end markets.

“We’ve supported market development in the past, particularly in the field of plastics, but attempting to develop a fiber market is a whole different beast,” he said.

Yousif pointed to several municipalities that have upgraded their fiber optical sorting systems, installed ballistic separators and or completed MRF retrofits to include artificial intelligence robotics.

Those investments could pay off in major ways in the coming years because a handful of North American mills are set to open or roll out expansions allowing them to take more recovered fiber.

“It’s a mix of reasons why the new capacity increases are coming on-line,” said Hawkinson of AF&PA, explaining some mills that used to make grades such as newsprint are shifting into recycled packaging, and other idled mills are restarting.

Claugus of Pioneer noted that “with each one of these projects, it is going to, all other things being equal, impact price.” But he also cautioned MRFs and municipalities against assuming the in-development fiber projects will guarantee better recycling economics.

As some of these North American mills prepare to expand their recycled paper purchasing, other mills that have been involved in the recycling sector for years are continuing to advance domestic paper recovery, developing innovative end uses in some cases.

Sustana Fiber operates two pulp facilities, one in Wisconsin and one outside Quebec City.

The food contact component brings some additional requirements to the recycled fiber, such as the material being fluorocarbon free and having other safety measures.

Colin Staub is the staff writer for Resource Recycling. He can be contacted at [email protected]