Deposits double for many drinks in British Columbia 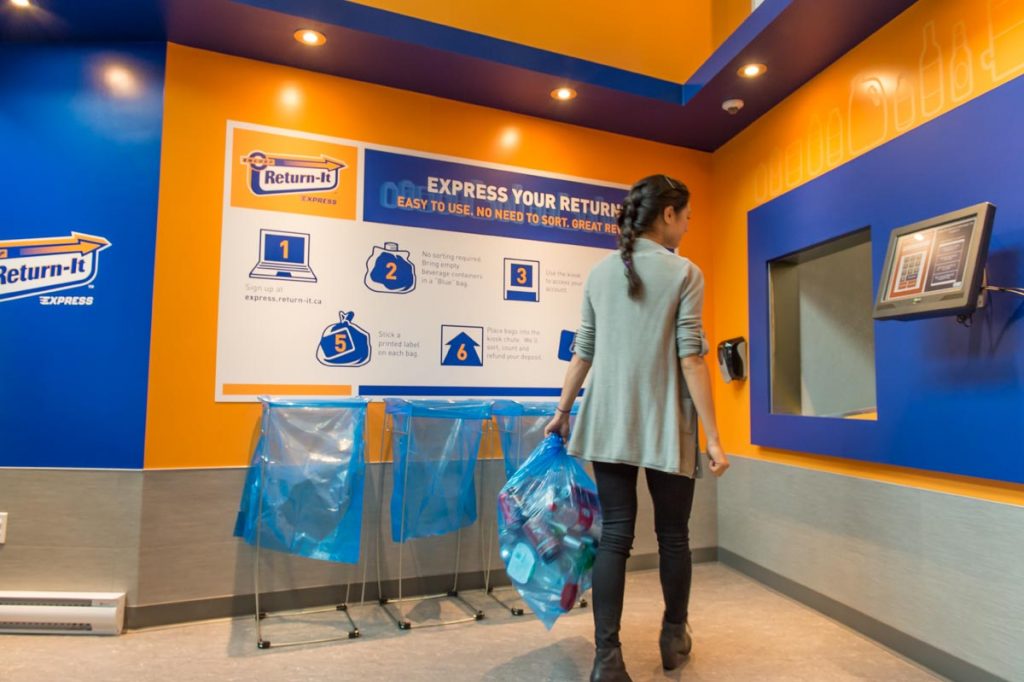 British Columbia residents recently gained access to the Return-It Express program, through which they can bag their containers and drop them off at one of 60 depots. | Courtesy of Encorp Pacific

The majority of beverage containers in British Columbia had their deposit values increase from 5 cents to 10 cents at the start of this month, creating more consistency in the provincial redemption program.

Starting Nov. 1, stewardship group Encorp Pacific raised the deposit from 5 cents to 10 cents (in Canadian currency) for soft drinks, juice, water, energy drinks and sports drinks up to and including 1 liter in size.

The deposit was already 10 cents for beer, wine and spirits in containers of that size. Now, the only containers that don’t have 10-cent deposits are those over 1 liter – they carry a 20-cent deposit.

The British Columbia government is considering reducing that 20 cents to 10 cents for larger bottles, which account for 5% of the deposit containers. That would create 100% deposit consistency across the province of 5 million people.

“We think it creates some operational efficiencies for Return-It in terms of how we manage the system,” said Allen Langdon, President & CEO of Return-It, which is the public-facing name of Encorp Pacific’s program. “We think it also makes the system much easier for consumers to understand and be able to calculate what the refund owed to them is. When you have three deposit levels, it can be pretty daunting for a consumer to try to understand how much they’re actually due back. If everything’s 10 cents, it makes it pretty easy.”

British Columbia achieved a 77.4% recovery rate for deposit containers in 2018, according to Encorp’s 2018 report. Provincial regulations require the program to hit 75% redemption. Encorp Pacific’s plan calls for an 82% recovery rate. The 77.4% recovery rate was up from 75.8% the prior year, but that 2017 number was a 10-year low.

Langdon said he expects Encorp Pacific’s recovery rate to increase for a couple of reasons: The increase from 5 cents to 10 cents – an increase that affects 80% of the containers in the system – and the July 1, 2019 rollout of the Return-It Express program, through which consumers bag their containers, drop them off at one of 60 depots and have their deposits returned to them electronically.

Encorp Pacific decided to voluntarily increase the deposit over a month ago, and it announced the change on Oct. 23. But the move followed signals that British Columbia regulators were considering requiring the change.

This summer, the Ministry of Environment and Climate Change Strategy launched a consultation on developing its Clean BC Plastics Action Plan. It includes everything from potential bans on single-use plastic products to expanding the scope of producer responsibility regulations.

In terms of bottle deposits, the document signals the government’s interest in having a unified 10-cent deposit; adding milk and milk substitute drinks to the program; and allowing refunds to be paid electronically, as in-store credit or as donations to nonprofit groups.

British Columbia first enacted a bottle deposit program in 1970, making it the first state or province in North America to roll out a program. Oregon followed shortly after, implementing its bottle bill in 1972.