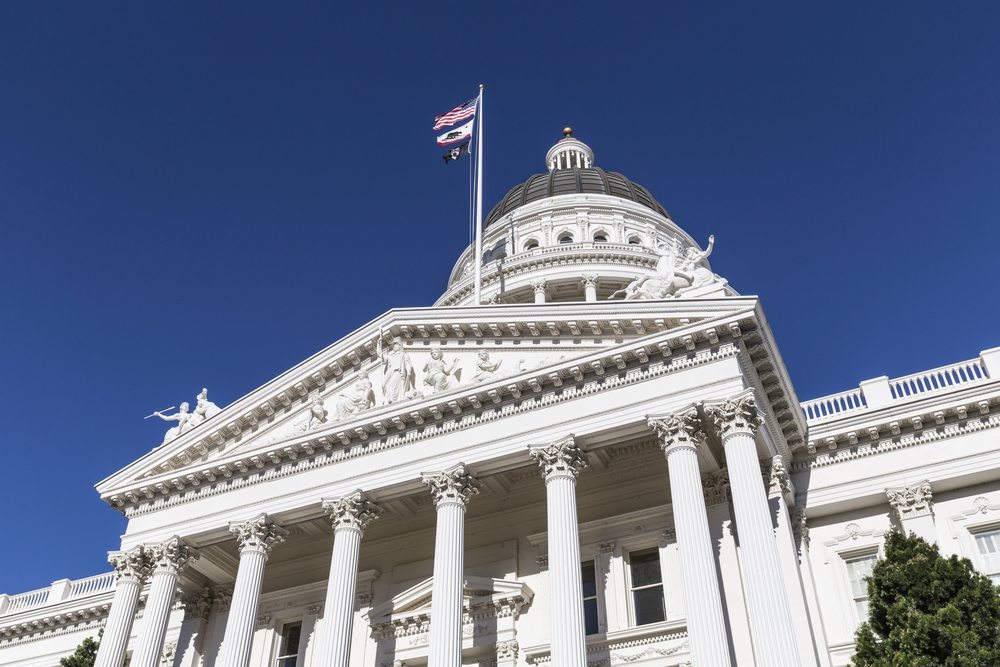 The California Capitol in Sacramento. | trekandshoot/Shutterstock

California lawmakers passed a bill requiring the use of recycled plastic in beverage containers. Separately, they OK’d legislation aimed at easing the use of cullet in bottles.

The two bills are separate from a sweeping bill focused on single-use packaging that failed to advance during the recent legislature session.

Producers of most plastic beverage containers sold in California will need to include 10% recycled plastic across their product offerings by 2021 and 50% by 2030, under legislation approved last week.

Assembly Bill 792 cleared the California State Assembly on a 60-12 vote on Friday, which was the final day for lawmakers to pass bills before the session closed.

Under the bill, plastic bottles that are covered under the state’s container redemption program will be subject to phased-in recycled plastic mandates. Manufacturers’ usage will be evaluated across the company’s entire product line sold in California, meaning not all of a company’s containers will need to include recycled plastic as long as the overall percentage meets the mandate.

The percentages and timeline were softened multiple times during the course of the bill’s development. It originally set a 100% recycled plastic mandate by 2035. Later, that was reduced to a maximum of 75% by 2030. The mandate was further reduced to 50% by 2030 in the final version that passed last week.

A legislative analysis of the bill put the mandates in the context of major beverage companies voluntarily increasing their recycled plastic use. Coca-Cola and PepsiCo, for example, have announced recycled feedstock goals in recent years.

“While these goals indicate that incorporating additional recycled content is possible, currently the vast majority of plastic beverage containers contain little to no recycled content,” the analysis states.

In previous hearings on the bill, proponents said the bill would build demand for recycled plastic, creating an industry that could even outpace the bill’s content requirements. Opponents pointed to insufficient collection infrastructure.

Nestlé Waters North America, which initially opposed the bill, released a statement praising the passage of the final legislation.

Describing the bill as “ambitious and workable,” the company pointed to one change in particular that influenced its position shift. In the final text, the California Department of Resources Recycling and Recovery (CalRecycle) must, at least annually and at most twice per year at the request of the beverage industry, consider whether the requirements are realistic in light of a variety of factors. The agency will analyze market conditions, the availability of recycled plastic, the capacity of recycling and processing infrastructure, and more.

Upon a request from beverage manufacturers, CalRecycle must consider the petition within 60 days, according to the bill. If the agency determines the requirements are unrealistic, CalRecycle has the authority to reduce or suspend the recycled plastic mandate.

In a release, Charles Broll, executive vice president and general counsel of Nestlé Waters North America, said the company “appreciates that legislative leaders worked with industry and environmental groups to create this landmark piece of legislation.”

The bill now goes to Gov. Gavin Newsom for a signature. According to Assemblyman Phil Ting, who sponsored the bill, the governor has until Oct. 13 to act.

Lawmakers passed a bill that will allow higher incidental levels of lead in recycled-content glass bottles and jars.

Current state law bans the sale of glass packaging with incidental concentrations of lead, cadmium, mercury or hexavalent chromium over 100 parts per million. Senate Bill 232 temporarily raises the limit to 200 parts per million if the heavy metal content is because the manufacturer used recycled glass in the bottle. The allowance expires on Jan. 1, 2024.

The increase to 200 parts per million brings California in line with the current version of the Toxics in Packaging Clearinghouse (TPCH) model legislation, an earlier version of which was used as the basis for California’s law. It also harmonizes the Golden State’s limit with European Union regulations.

A Senate floor analysis earlier this month cited past studies that showed there isn’t a significant risk of harmful amounts of lead leaching from glass bottles or jars into food or drink.

The Senate and Assembly both passed the bill with unanimous votes. It has been sent to Gov. Newsom for his consideration.

Billed by the lawmakers who authored it as supporting the use of cullet in California, the legislation was supported by the Beer Institute; California Craft Brewers Association; California Manufacturers & Technology Association; European Container Glass Federation; Glass Packaging Institute; Glass, Molders, Pottery, Plastics and Allied Workers Council of the United Steelworkers; Owens-Illinois and the Wine Institute.

When asked about the impacts of the change, Strategic Materials, which sorts post-consumer glass for sale to bottle manufacturers, told Resource Recycling the company doesn’t expect changes from the bill.

California statutes already require that bottle manufacturers use cullet. Their bottles must incorporate at least 35% post-consumer glass, or 25% if the cullet is mixed color.

This story has been updated with a statement from Nestlé Waters North America and with information on potential exemptions included within AB 792.