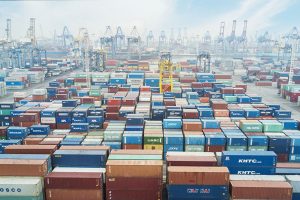 Containers at a port in Jakarta, indonesia.

Import guidelines for scrap paper shipments to Indonesia have been revised and are less stringent than initially proposed, the country’s government announced last week. Still, the rules will mean additional inspections for paper traders.

Indonesian officials in late March informed scrap paper traders that recovered fiber imports into Indonesia would need to meet increased inspection and bale quality requirements, beginning just one week after the announcement. The initial proposal called for a 0.5% contamination limit, similar to the strict regulation implemented by the Chinese government last year.

But after swift pushback from recycling industry stakeholders, the government backed off from the plan and put policy changes on hold. Now, the proposal has been relaxed to a more lenient policy, although it will almost certainly bring additional scrutiny for fiber loads.

Fiber market research firm RISI on Friday reported (subscription required) on a letter from the Indonesian government to inspection officials, which outlined changes to the proposed policies. Inbound scrap paper loads will still be subject to additional inspections, with two bales per container required to be opened and examined for quality, according to RISI. But the 0.5% contamination limit has been altered in favor of more widely used recycled-paper quality specifications.

The Indonesian government will use the Institute of Scrap Recycling Industries (ISRI) quality specifications, which allow for 1 to 2% prohibitives and 3 to 4% outthrows.

In a paper bale, prohibitives are non-paper materials, such as plastics or metals. Outthrows are defined as paper materials of a different grade than the bale classification; for instance, OCC in a sorted office paper bale.

ISRI on Friday also wrote about the change, describing it as a “move that will benefit paper recyclers and provide clear guidance on the trade of recovered paper.” ISRI said it has been working with stakeholders and government officials in Indonesia for the past several months.

It’s unclear when the new policy will take effect.

Meanwhile, in a further sign the Southeast Asian country is pushing to make scrap import control a priority, Indonesian officials this week returned several loads of scrap material to their originating port in the U.S.

The Indonesian Ministry of Environment and Forestry on Sunday announced that five containers, which were imported from the U.S. and labeled as loads of scrap paper, were heavily contaminated with non-paper materials. In an Indonesian language press release, the ministry said the containers included a variety of plastic materials, food packaging, clothing, shoes and wood.

According to the release, the containers were ready to leave Indonesia and return to the U.S. on June 14.

Reuters reported that the scrap paper actually originated in Canada but was exported by being routed through Seattle. The containers totaled about 110 short tons of material, Reuters reported.