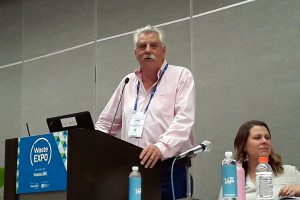 Programs on opposite coasts enjoyed bale quality benefits after switching from single- to dual-stream collection, two experts noted. But an industry group leader suggested education may have been a key driver.

Three speakers discussed the trade-offs between single-stream and dual-stream collection during a session at last week’s WasteExpo in Las Vegas.

Long a debate of interest, the single-stream versus dual-stream conversation has taken on added attention as buyers of recycled commodities have paid less for material while demanding higher quality.

‘I think it pays for itself’

Pellegrini is president of his family’s company, Peninsula Sanitary Service, Inc. (PSSI) of Stanford, Calif., and has ownership in a number of related companies.Together, the companies provide collection service to seven jurisdictions in the San Francisco Bay Area.

Pellegrini talked about switching Milpitas, a city north of San Jose, Calif., from single-stream to dual-stream service last year. The dual-stream service uses automatic collection, with residents using split-carts that have space for fiber on one side and containers on the other. Milpitas also now uses a split garbage/organics cart.

“Selling this product off dual-stream collection, I truly believe you’re always going to get a higher and better value,” Louie Pellegrini said.

The city’s 14,000 single-family houses switched from single-stream to dual-stream collection in December 2017. As a result of the change, Pellegrini estimates residual at the MRF has dropped from 25% to 10%.

Dual-stream collection has generated a particularly clean stream of paper, he said. In some cases, crews have taken fiber from a collection vehicle to a paper house without doing any sorting first. And the container stream is simpler to sort without as much paper in it, Pellegrini said.

“Selling this product off dual-stream collection, I truly believe you’re always going to get a higher and better value,” he said.

One factor reducing contamination is the size of the split containers, he said. For single-stream communities his company serves, carts with one 96-gallon compartment are provided.

“That big cart with that big lid is real convenient to throw stuff in it,” he said. “What I believe the dual-split cart brings is the size of the lid – it’s not easy for them to put the stuff in that shouldn’t be there.”

He pointed to pay-as-you-throw (PAYT) service as worsening contamination. A great concept, PAYT is often employed as a way to motivate people to reduce their garbage generation, but if they can’t fit trash in the smaller waste container, they put it in the recyclables container instead, Pellegrini said. Exacerbating the issue in the San Francisco Bay Area is a housing shortage.

“We’re seeing multiple generations, 10, 12, 15 people living in one house, subscribing to the least level of service, and it’s going to add problems in the recycling container,” he said.

He cited financial benefits to the switch. During the first quarter of this year, Milpitas households are diverting 56% of material, including food scraps, recyclables and yard debris, from landfill. His company is currently receiving an average of about $94 per ton for recyclables, and landfill transportation and tip fees costs are around $80 per ton. So diverting what was previously a MRF residual brings a potential financial benefit of $174 a ton if diverted from landfill and sold for recycling, Pellegrini said.

“On an economic basis, I think it pays for itself,” he added. 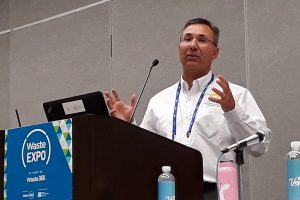 The solid waste authority provides dual-stream recyclables collection, sorting and marketing service throughout the county, which is on the east coast of Florida, north of Miami. One bin has plastic, metal and glass containers, and the other holds cardboard and papers. The MRF sorts about 90,000 tons of recyclables per year.

Within Palm Beach County is the city of Lake Worth, which has about 12,500 single-family residences and 4,900 multi-family units. For more than a decade, the city had a single-stream collection service though which it was paid $10 per ton for recyclables. Last year, during contract renewal, the hauler wanted to be paid $85 a ton, Puz said. That would have cost the city about $187,000 per year. City leaders weren’t interested.

The cost to cancel the program and dispose of all recyclables would have come out to about $92,000 a year in extra landfill tipping expenses, he said, plus elected leaders would felt the backlash from the public.

The city of Lake Worth asked the county how it could be added to the county’s dual-stream program without incurring any upfront costs, Puz said. Eventually, the county and city came to an agreement through which the county bought 28,000 single-family house bins and 650 multi-family carts for the city. The governments split the recycling revenues 50-50, annually generating roughly $14,000 each. It will take about 10.5 years under the arrangement for the county’s retained share to pay back its upfront receptacle costs, he said.

“The first day that we collected, we were very proud to see that residents did it right,” Willie Puz said.

The switch from single-stream to dual-stream went into effect in October 2018.

“We were scared,” Puz said. “We didn’t know what was going to be coming into the facility. Because we heard it from residents that they didn’t care – they were losing their wheeled cart, and they didn’t like the way that they had to do it now. But the first day that we collected, we were very proud to see that residents did it right.”

Based on initial recyclables tonnages, the city expects to collect about 1,800 tons per year, down from about 2,200 tons when the city had single-stream service. Puz estimates the contamination rate has fallen from about 20% to about 7%. The city also created a recycling education staff position to help educate the public on which materials are accepted.

Anne Germain, vice president of technical and regulatory affairs at NWRA, discussed why a dual-stream community might want to switch to single-stream collection. 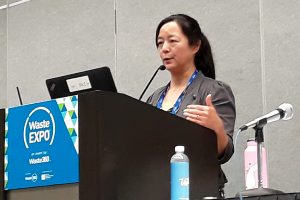 She made the case that the cause of contamination is a lack of education, not necessarily the collection method. She pointed to primary contaminants in the recycling stream: electronics, bags, diapers, needles, hoses, wire, food and liquids.

“None of these are contributed to your recycling by whether it’s dual-stream or single-stream,” Germain said. “These are all the result of people doing wish-cycling. So I think one of the things we can take away right away is education really is key.”

When she asked the crowd of about 40 people how many have been confused about whether an item should go in the recycling bin, hands shot up around the room.

“If we as recycling professionals get confused, how can we expect the public to really understand,” she said. She pointed to artificial intelligence robots as a solution to sort items into the correct bin.

When single-stream service took hold in the industry, participation went up, but that doesn’t necessarily mean the collection method, alone, drove the increase, she said. Education around the switch may have been the cause.

“You can have low contamination rates with either program,” Anne Germain said.

Education programs have diminished over the past dozen years or so, Germain said, and a lot of messaging remained focused on encouraging recycling in general, leading to wish-cycling. She identified other factors that increased contamination: a lack of feedback for households putting the wrong items in the cart, programs requiring participation, decreased collection frequency, implementation of PAYT, and an evolving materials stream.

She acknowledged contamination rates have increased over the years. But she said she’s talked with single-stream program staff who say they see contamination as low as 8% to 12% because their public is well-informed.

“You can have low contamination rates with either program,” she said.

She noted that the majority of waste management costs come from collection, rather than sorting or disposal. For recyclables, collection is typically 2.5 times the cost of processing. She pointed to reduced collection efficiency from using a split-cart system, and she noted using bins as opposed to rollcarts leads to higher costs and safety concerns because collectors have to get out of their trucks to manually empty containers.

“We’re trying to move the industry toward just having a single driver and not having anybody outside the truck, primarily because we are one of the top most dangerous industries in the country,” she said. “Too many of our people get hurt or killed. So we would love to see the industry move towards automation and value the health and safety of the industry over cost concerns.”