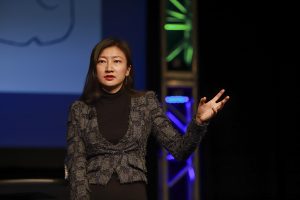 Chris Cui on stage at the 2019 Plastics Recycling Conference and Trade Show.

Although the recycling relationship between the U.S. and China was hampered by scrap material restrictions, an expert says companies in both countries can help each other.

Recycling companies in China have long played the role of outsourced recycling processors for countries such as the U.S., said Chris Cui, director of China Programs for Closed Loop Partners, an investment firm providing capital to recycling-related enterprises.

Chinese companies have the capability to process material at relatively low cost, she said. The U.S., on the other hand, is far more advanced in collection and transportation of recyclables.

“This is a gap,” Cui said from the stage of the Plastics Recycling Conference and Trade Show, held March 11-13 in National Harbor, Md. The gap can be bridged by connecting recycling operators in both countries, so they can share knowledge and resources.

“Although we have been in this space in the U.S. for several years, we see there is a huge opportunity after the ban for us over there, and we want to build a bridge for the industry here in the U.S. to work together with their counterparts in China and the rest of Asia,” Cui said.

She floated a figure that the plastic not currently being recycled in the U.S. and China represents over $230 billion in potential value.

Many Chinese companies have already come to the U.S. and invested in North American processing infrastructure to ensure continued feedstock supply, Cui said. And Closed Loop has seen many more companies that are interested in doing so. Cui said U.S. companies can work with the Chinese operators “by sharing your knowledge of the U.S. market as well as your network.”

“If you have advanced technology or a business model that can help Chinese companies, that’s one big business opportunity for you and your company,” Cui said.

She described some of the biggest hurdles for increased investment and partnership between Chinese and U.S. businesses, noting that Closed Loop wants to help tackle these barriers by increasing communication between companies in both countries.

“A lot of Chinese companies have a lot of challenges when they come to the U.S., culturally,” she said. “You can invest in a plant, but how do you make sure that the management team is up and running? How do you make sure you know how to work with the local state, the local government? How can you identify which area is the best for you to set up your plant? You have to consider the transportation, do you have enough feedstock, if there’s any tax incentive opportunity zone, those are the kinds of value you can add to the Chinese players that are coming over here.”

Meanwhile, in China, investment trends toward the collection and sortation side of the business.

“If you have advanced technology or a business model that can help Chinese companies, that’s one big business opportunity.”

Closed Loop has seen emerging technology investments in a variety of recycling sectors, Cui said, ranging from robotic sorting to internet of things (IOT) systems that support onsite recycling, that is, self-contained processing equipment that can be installed anywhere and reduce the need for scrap material transportation.

“It’s happening very fast in China, because as I said, the industry has been hit a lot, but there’s also a lot of demand because they no longer have the feedstock from the U.S.,” she said. “How do they keep their shop running? For the big paper companies, plastic companies, where do they get it? They need to use their own money to invest in innovative technology to do that.”

A view from within

From an external perspective, the timeline of China’s actions has been well-documented. Cui provided details on recycling inside China, why it became a topic of interest for the government, what the government hopes to do by limiting scrap imports and how that policy fits into wider country initiatives.

The recycling issue is tied to larger Chinese economic trends, she explained.

“Currently, the U.S. trash generation is very high compared to in China, but that’s about to change,” Cui said. “In China, with the emerging middle class, the lifestyle will change. We will spend more money on cars, consumer products, so we can see the trash generation per person is going to come up.”

At the same time, China’s recycling rate hovers at a “very low” level compared with the U.S., Cui said, and most material in China is being landfilled. China’s huge population makes it fairly difficult to site landfills in the country, so given the predicted trash generation increase, landfill alternatives have received greater interest.

Pushing toward a circular economy system is “of strategic importance to the government,” Cui said.

“They’re coming up with a holistic approach to support the development of this sector, for private sector as well as for public sector, as well as for foreign investors coming to China to invest,” she said.

Banning scrap material imports “is just one of the actions the government has taken,” Cui noted, and was designed in part to boost development of the domestic recycling infrastructure.