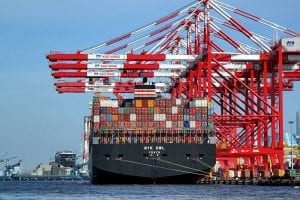 In early October, regulations took effect reducing the types of material allowed for import. According to the Tai Pei Times, fiber imports have been limited to OCC and kraft and de-inked paper. On the plastics side, companies can only import post-industrial plastic from their overseas production facilities or loads of a single material type. It’s unclear whether certain polymers are banned altogether.

In response, on Sept. 26, the CMA-CGM shipping line immediately suspended plastic and paper recyclables shipments to Taiwan, except for OCC and recovered paper pulp, in accordance with a “local regulation to curb imports of waste plastic and paper.”

Additionally, it released regulations covering contamination limits. They differentiate between different types of contamination, according to an online translation of one document. Recycled paper and plastic shipments cannot contain higher than 2 percent “impurity” content. For a recovered paper bale, “impurity” means any of the prohibited paper grades (food packaging or paper containing flame retardants, as examples) or any non-paper substance.

This process has been ongoing since July, and in recent weeks sources have reported that mixed paper may be removed from the “accepted” list. Various types of scrap plastic have also been proposed for removal. Industry associations in the country are concerned about the ramifications for manufacturers.

Malaysia: Resource Recycling reported early this month on import requirements the Malaysian government is working on. It’s unclear when those rules will take effect. In the meantime, the government is not issuing import licenses for scrap plastic.

Steve Wong, executive director of the China Scrap Plastics Association, told Resource Recycling that Malaysia is proposing to only allow scrap plastic from the U.S., Europe and Japan.