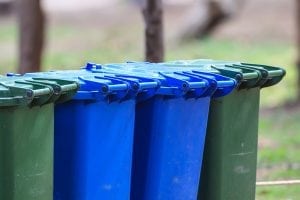 The Continuous Improvement Fund (CIF) recently looked into the efficiency of using collection-vehicle drivers to pick out contamination and other approaches that could lead to cleaner streams of recyclables.

Cleaning at the curb

In one study, the CIF, an Ontario, Canada industry-funded group that has invested more than $50 million into infrastructure and research projects, explored whether it is efficient for collection truck drivers to attempt to remove contaminants from recycling loads at the curb.

To carry out the study, a driver collected material on a dual-stream collection route, and the driver didn’t make significant efforts to remove contaminants. On a subsequent collection date, the same driver would collect on the same route and “applied additional effort to leave contamination at the curb,” according to CIF.

In both cases, the material was weighed and sorted at the MRF to determine its contamination level.

CIF found that additional sorting required the driver to stop for an average of 52 seconds, roughly 33 seconds longer than stopping time without driver-sorting efforts. When the material was evaluated at the MRF, researchers found the additional efforts from the driver resulted in a 1.2 percentage point increase in contamination being removed before the material arrived at the MRF.

Given the time increase, the study determined it’s not an efficient way to fight dirty recyclables.

“It is concluded that additional curbside sorting is not a cost-effective strategy to reduce contamination and residue levels at MRFs,” CIF found, adding that “the additional time spent sorting would significantly increase curbside collection costs.”

Outreach and education programs, along with investment in additional MRF equipment to increase sortation, “ultimately prove to be the most cost effective strategy rather than trying to achieve artificially low curbside contamination levels,” according to CIF.

In August, CIF weighed the efficacy of split recycling carts, which have different compartments for the fiber stream and all other materials. The study looked at the municipal program in Sault Ste. Marie, which contracts with Green for Life Environmental (GFL) for recycling collection.

The evaluation was conducted as the municipality and its hauling contractor celebrated five years of using the split carts.

It found the 95-gallon split carts are effective at maintaining low contamination levels, reducing some of the challenges often found in dual-stream programs. The Sault Ste. Marie program achieved a 66 percent diversion rate.

Contamination at the curb was under 13 percent in the program, and cross contamination within the carts made up just 1 percent of the problem. The most common challenge was plastics not accepted by the program, such as Nos. 3-7, making it into the containers compartment.

Although most residents were sorting material into the carts correctly, there was still a contamination challenge during collection: After the carts were dumped into collection trucks, cross contamination increased from 1 percent up to 2.7 percent. According to CIF, this could be happening during transit or when the carts were being loaded into the truck.

Overall, the municipality and hauler were “both satisfied with the move to split-body 95-gallon recycling carts” and noted that although it might not work in every municipality, it has proved to be “a very effective alternative collection method that can be applied in both large and small communities.”

Two Canadian municipalities recently asked CIF for funding to help support their program shifts from single- to dual-stream recycling. In August, CIF wrote about both cases.

The Township of Drummond-North Elmsley, Ontario decided to move away from single-stream recycling after its MRF contractor quoted higher processing costs, according to CIF. Switching to dual-stream would lower processing costs by 25 percent, compared with the price increase proposed by the contractor.

The program will switch from weekly single-stream collection to an alternating system in which fiber is collected in the cart one week and containers the following week. This system was chosen “to achieve a zero financial impact on collection costs,” according to CIF. The municipality is working to roll out additional receptacles for households to store material between the longer collection intervals.

“The Township forecasts a return on investment in less than 3 years from this program change,” CIF wrote.