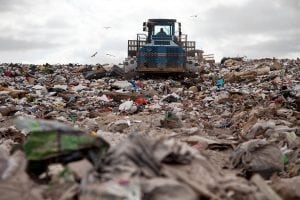 Yale University researchers estimate 230 million metric tons of MSW were landfilled in the U.S. in 2015, nearly twice the estimate from federal officials.

It estimates landfill weights in 2015 for a number of materials (all weights are in metric tons): paper (63 million tons), food scraps (35 million tons), plastic (32 million tons), textiles (10 million tons) and electronics (3.5 million tons). The estimates are far larger than those produced by the U.S. EPA, which uses a different methodology to arrive at disposal numbers. But the researchers estimates for metals and glass disposal were relatively close to EPA estimates.

For their study, the researchers used a new model to estimate disposal weights. According to their report, it triangulates measurements spanning 1,161 landfills and 15,169 solid waste samples collected and analyzed at 222 sites across the U.S.

The researchers estimated total landfill costs at $10.7 billion, or about $47 a metric ton. They put a number to how much the lost paper, plastic and metal commodities may have been worth: $1.4 billion. And they estimated landfill methane emissions were 14 percent greater than the U.S. government’s estimate.