New end use for mixed paper and plastics developed 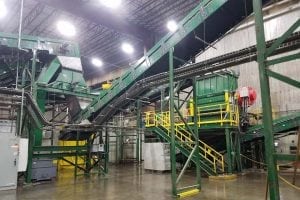 Markets for mixed paper and plastics have been hard hit by China’s import restrictions. Now, a Texas company is working to develop a new domestic one: paper-plastic building panels.

Houston-based Continuus Material Recovery developed a process to recycle mixed paper and plastics together into panels. The company recently purchased Des Moines, Iowa-based ReWall Company to help it scale up. The acquisition gives Continuus its first board manufacturing assets.

ReWall has become well known to the recycling industry as an end market for post-consumer food and beverage cartons. The company sidesteps the challenging task of separating thin layers of fiber and plastic in cartons, and it instead recycles the entire multi-layer material into construction boards.

For a couple of years, Continuus’ sister company, Continuus Energy, has partnered with Waste Management in a joint venture in Philadelphia called SpecFUEL Partners. Continuus Energy runs the 1,000-tons-per-day MSW and recyclables sorting and processing facility, which creates a paper-plastics fuel to burn for energy.

Over the last year, Continuus has developed a technology to recycle that paper-plastics mix into construction boards, company CEO Carl Rush told Resource Recycling. The four-foot-by-eight-foot boards, which go in commercial building roofs and walls, are made with a virgin-content fiberglass laminate.

“We see the boards as the next extension of a product line,” said Rush, who was previously senior vice president of organic growth for Waste Management. “We started in fuels and now branched out into boards.” 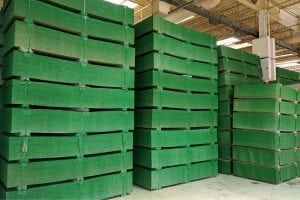 The boards, which are branded Everboard, are resistant to fire, hail, wind and moisture, he said. “You don’t have to give up anything using these products and types of materials, from a performance standpoint,” he said.

To date, Continuus has contracted with a lab for testing and ReWall for production, Rush said. When Continuus looked at buying manufacturing capabilities for Everboard, ReWall was really the only option, he said. The company acquired ReWall to make Everboard while Continuus works to scale up with a larger production facility.

Continuus acquired ReWall in mid-June. Rush wouldn’t disclose details of the transaction between the private companies.

In a press release, Rush said “ReWall has been a terrific example of innovative entrepreneurial spirit and we are grateful to bring their energy and drive into the Continuus team.”

A team from Continuus just returned from Germany, where they were looking at larger-scale production systems. Although it hasn’t settled on a location yet, Continuus plans to build a factory capable of pressing 150,000 tons per year of paper and plastic into 150 million square feet of board, Rush said.

Design and engineering have started for the larger facility, which he estimated could come on-line in a year.

Rush pointed to Continuus’ financial backing as one factor enabling its scale up. Continuus’ primary investors are WestRiver Group, an investment group based in Kirkland, Wash., and the George Kaiser Family Foundation, which invests in companies to generate returns to benefit children in the Tulsa, Okla. area. 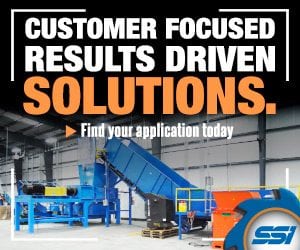